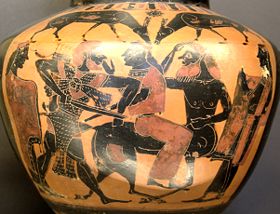 Deïanira or Dejanira (pronounced /ˌdeɪ.əˈnaɪərə/[1], Latinized in Greek, Δηϊάνειρα, [dɛːiáneːra], or Δῃάνειρα; Deïaneira 'man-destroyer'[2] or 'destroyer of her husband'[3]) is a figure in Greek mythology, best-known for being Heracles' third wife and, in the late Classical story, unwittingly killing him with the Shirt of Nessus. She is the main character in the play Women of Trachis by Sophocles.

Deianira is also the name of a second character in Greek mythology, an Amazon killed by Heracles during his ninth labour, the quest for the girdle of Hippolyta.[4] 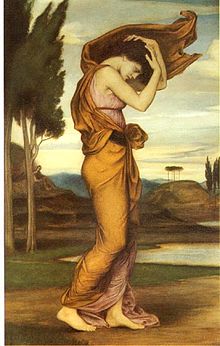 Deianira is the daughter of Althaea and Oeneus ('wine-man' and thus civilized), the king of Calydon, and the sister of Meleager. She also was said to have become the mother of Macaria (who saved the Athenians from defeat by Eurystheus).

One version of a late Classical tale relates that she was of such striking beauty that both Heracles and Achelous wanted to marry her and there was a contest to win her hand. Her father had already betrothed her to the fearsome river god Achelous, horned and bull-like. Deianira was not passive, however. "This Deianira drove a chariot and practiced the art of war", noted Apollodorus (Library and Epitome, book i, 8:1), but she wanted nothing to do with her suitor, who was able to take the form of a speckled serpent, a bull-headed man, or a bull. Robert Graves interpreted the association with war as a relationship with the pre-Olympian war goddess, Athene, who was an orgiastic bride in many local sacred marriages to kings who may have been sacrificed. Heracles, the greatest hero of the dawning Classical Olympian world of deities and men, had to defeat the river god to win her as his bride.

In another version of her tale, Deianira is instead the daughter of Dexamenus, king of Olenus. Heracles violates her and promises to come back and marry her. While he is away, the centaur Eurytion appears, demanding her as his wife. Her father, being afraid, agrees. Heracles appears in the nick of time and slays the centaur, claiming his bride.[5] 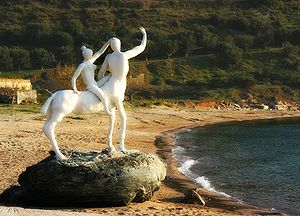 Deïaneira and Nessus by Vlahos Vaggelis

The central story of Deianira, however, concerns the Tunic of Nessus. A wild centaur named Nessus attempted to kidnap Deianira as he was ferrying her across the river Euenos, but she was rescued by Heracles, who shot the centaur with a poisoned arrow. As he lay dying, Nessus tricked Deianira, telling her that a mixture of olive oil with the semen that he had dropped on the ground and his heart's blood would ensure that Heracles would never again be unfaithful.

Deianira believed his words and kept a little of the potion by her. Heracles fathered illegitimate children all across Greece and then fell in love with Iole (also called Omphal). When Deianira thus feared that her husband would leave her forever, she smeared some of the blood on Heracles' famous lionskin shirt. Heracles' servant, Lichas, brought him the shirt and he put it on. The centaur's toxic blood burned Heracles terribly, and eventually, he threw himself into a funeral pyre. In despair, Deianira committed suicide by hanging herself or with a sword.