Prometheus
This article is about the Greek Titan. For other uses, see Prometheus (disambiguation). 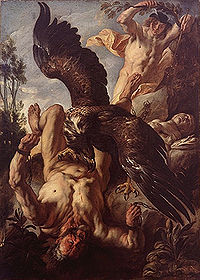 Prometheus having his liver eaten by an eagle. Painting by Jacob Jordaens, c. 1640, Wallraf-Richartz-Museum, Cologne, Germany.

In Greek mythology, Prometheus (Greek Προμηθεύς, "forethought")[1] is a Titan, the son of Iapetus and Themis, and brother to Atlas, Epimetheus and Menoetius. He was a champion of mankind, known for his wily intelligence, who stole fire from Zeus and gave it to mortals.[2] Zeus then punished him for his crime by having him bound to a rock while a great eagle ate his liver every day only to have it grow back to be eaten again the next day. His myth has been treated by a number of ancient sources, in which Prometheus is credited with – or blamed for – playing a pivotal role in the early history of mankind. During the Greek War of Independence, Prometheus became a figure of hope and inspiration for Greek revolutionaries and their philhellene supporters.

The Prometheus myth first appeared in the late 8th-century BC Greek epic poet Hesiod's Theogony (lines 507–616). He was a son of the Titan, Iapetus by Clymene, one of the Oceanids. He was brother to Menoetius, Atlas, and Epimetheus. In the Theogony, Hesiod introduces Prometheus as a lowly challenger to Zeus' omniscience and omnipotence. In the trick at Mecone, a sacrificial meal marking the "settling of accounts" between mortals and immortals, Prometheus played a trick against Zeus (545–557). He placed two sacrificial offerings before the Olympian: a selection of beef hidden inside an ox's stomach (nourishment hidden inside a displeasing exterior), and the bull's bones wrapped completely in "glistening fat" (something inedible hidden inside a pleasing exterior). Zeus chose the latter, setting a precedent for future sacrifices; henceforth, humans would keep the meat for themselves and burn the bones wrapped in fat as an offering to the gods. This angered Zeus, who hid fire from humans in retribution. Prometheus in turn stole fire in a giant fennel-stalk and gave it back to mankind. This further enraged Zeus, who sent Pandora, the first woman, to live with men.[3] She was fashioned by Hephaestus out of clay and brought to life by the four winds, with all the goddesses of Olympus assembled to adorn her. "From her is the race of women and female kind," Hesiod writes; "of her is the deadly race and tribe of women who live amongst mortal men to their great trouble, no helpmeets in hateful poverty, but only in wealth."

Prometheus, in eternal punishment, is chained to a rock in the Caucasus, where his liver is eaten daily by an eagle,[4] only to be regenerated by night, which, by legend, is due to his immortality.[5] Years later, the Greek hero Heracles (Hercules) slays the eagle and frees Prometheus from his chains.[6]

Hesiod revisits the story of Prometheus in the Works and Days (lines 42–105). Here, the poet expands upon Zeus' reaction to the theft of fire. Not only does Zeus withhold fire from men, but "the means of life," as well (42). Had Prometheus not provoked Zeus' wrath (44–47), "you would easily do work enough in a day to supply you for a full year even without working; soon would you put away your rudder over the smoke, and the fields worked by ox and sturdy mule would run to waste." Hesiod also expands upon the Theogony's story of the first woman, now explicitly called Pandora ("all gifts"). After Prometheus' theft of fire, Zeus sent Pandora in retaliation. Despite Prometheus' warning, Epimetheus accepted this "gift" from the gods. Pandora carried a jar with her, from which were released (91–92) "evils, harsh pain and troublesome diseases which give men death".[7] Pandora shut the lid of the jar too late to contain all the evil plights that escaped, but hope remained in the jar.

Angelo Casanova,[8] Professor of Greek Literature at the University of Florence, finds in Prometheus a reflection of an ancient, pre-Hesiodic trickster-figure, who served to account for the mixture of good and bad in human life, and whose fashioning of men from clay was an Eastern motif familiar in Enuma Elish; as an opponent of Zeus he was an analogue of the Titans, and like them was punished. As an advocate for humanity he gains semi-divine status at Athens, where the episode in Theogony in which he is liberated[9] is interpreted by Casanova as a post-Hesiodic interpolation.[10]

Prometheus Bound, perhaps the most famous treatment of the myth to be found among the Greek tragedies, is traditionally attributed to the 5th-century BC Greek tragedian Aeschylus. At the center of the drama are the results of Prometheus' theft of fire and his current punishment by Zeus; the playwright's dependence on the Hesiodic source material is clear, though Prometheus Bound also includes a number of changes to the received tradition.[11] Before his theft of fire, Prometheus played a decisive role in the Titanomachy, securing victory for Zeus and the other Olympians. Zeus's torture of Prometheus thus becomes a particularly harsh betrayal. The scope and character of Prometheus' transgressions against Zeus are also widened. In addition to giving humankind fire, Prometheus claims to have taught them the arts of civilization, such as writing, mathematics, agriculture, medicine, and science. The Titan's greatest benefaction for humankind seems to have been saving them from complete destruction. In an apparent twist on the myth of the so-called Five Ages of Man found in Hesiod's Works and Days (wherein Cronus and, later, Zeus created and destroyed five successive races of mortal men), Prometheus asserts that Zeus had wanted to obliterate the human race, but that he somehow stopped him. Moreover, Aeschylus anachronistically and artificially injects Io, another victim of Zeus' violence and ancestor of Heracles, into Prometheus' story. Finally, just as Aeschylus gave Prometheus a key role in bringing Zeus to power, he also attributed to him secret knowledge that could lead to Zeus' downfall: Prometheus had been told by his mother Gaia of a potential marriage that would produce a son who would overthrow Zeus. Fragmentary evidence indicates that Heracles, as in Hesiod, frees the Titan in the trilogy's second play, Prometheus Unbound. It is apparently not until Prometheus reveals this secret of Zeus' potential downfall that the two reconcile in the final play, Prometheus the Fire-Bringer.

Prometheus Bound also includes two mythic innovations of omission. The first is the absence of Pandora's story in connection with Prometheus' own. Instead, Aeschylus includes this one oblique allusion to Pandora and her jar that contained Hope (252): "[Prometheus] caused blind hopes to live in the hearts of men." Second, Aeschylus makes no mention of the sacrifice-trick played against Zeus in the Theogony.[12]

These innovations reflect the play's thematic reversal of the Hesiodic myth. In Hesiod, the story of Prometheus (and, by extension, of Pandora) serves to reinforce the theodicy of Zeus: he is a wise and just ruler of the universe, while Prometheus is to blame for humanity's unenviable existence. In Prometheus Bound, this dynamic is transposed: Prometheus becomes the benefactor of humanity, while every character in the drama (except for Hermes, a virtual stand-in for Zeus) decries the Olympian as a cruel, vicious tyrant.

After fashioning a man out of clay, Prometheus watches Athena impart reason to his creation. Painting by Christian Griepenkerl, 1877

Some two dozen other Greek and Roman authors retold and further embellished the Prometheus myth into the 4th century AD. The most significant detail added to the myth found in, e.g., Sappho, Plato, Aesop and Ovid — was the central role of Prometheus in the creation of the human race. According to these sources, Prometheus fashioned humans out of clay. In the dialogue Protagoras, Protagoras asserts that the gods created humans and all the other animals, but it was left to Prometheus and his brother Epimetheus to give defining attributes to each. As no physical traits were left when the pair came to humans, Prometheus decided to give them fire and other civilizing arts.[13]

Although perhaps made explicit in the Prometheia, later authors such as Hyginus, Apollodorus, and Quintus of Smyrna would confirm that Prometheus warned Zeus not to marry the sea nymph Thetis. She is consequently married off to the mortal Peleus, and bears him a son greater than the father — Achilles, Greek hero of the Trojan War. Apollodorus moreover clarifies a cryptic statement (1026–29) made by Hermes in Prometheus Bound, identifying the centaur Chiron as the one who would take on Prometheus' suffering and die in his place.[13]

Reflecting a myth attested in Greek vase paintings from the Classical period, Apollodorus places the Titan (armed with an axe) at the birth of Athena, thus explaining how the goddess sprang forth from the forehead of Zeus.[13]

Anecdotally, the Roman fabulist Phaedrus attributes to Aesop a simple etiology for homosexuality, in Prometheus' getting drunk while creating the first humans and misapplying the genitalia.[16]

The two most prominent aspects of the Prometheus myth – the creation of man from clay and the theft of fire – have parallels within the beliefs of many cultures throughout the world:

The creation of man from clay

The theft of fire 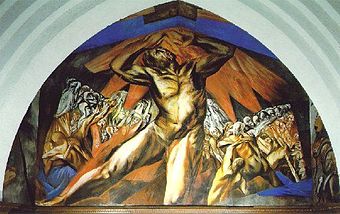 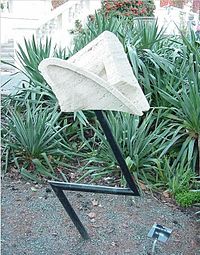 The story of Prometheus has inspired many authors through the ages, and the Romantics saw Prometheus as a prototype of the natural daemon or genius. 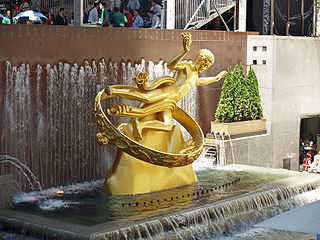 Sculpture of Prometheus in front of the GE Building at the Rockefeller Center (New York City, New York, United States).

Scientific and medical works about liver regeneration often refer to Prometheus who was chained to a rock in the Caucasus where, each day, his liver was devoured by an eagle only to grow back each night. Some think the myth indicates that the ancient Greeks knew about the liver’s remarkable capacity for self-repair, since the etymology of ἧπαρ (Greek for liver) is derived from ἠπάομαι, meaning mend, repair.[26] This claim has been challenged.[27] Because of the association of Prometheus with liver regeneration, his name has also been associated with biomedical companies involved in regenerative medicine.