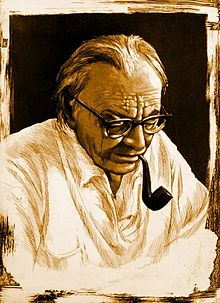 Orff was born in Munich on July 10, 1895. His family was Bavarian and active in the German military.

Orff started studying the piano at age five and also took organ and cello lessons. However, he was more interested in composing original music than in studying to be a performer. Orff wrote and staged puppet shows for his family, composing music for piano, violin, zither, and glockenspiel to accompany them. He had a short story published in a children's magazine in 1905 and started to write a book about nature. In his spare time he enjoyed collecting insects.

By the time he was a teenager, Orff was writing songs, although he had not studied harmony or composition; his mother helped him set down his first works in musical notation. Orff wrote his own texts and he learned the art of composing, without a teacher, by studying classical masterworks on his own.

In 1911, at age 16, some of Orff's music was published.[1] Many of his youthful works were songs, often settings of German poetry. They fell into the style of Richard Strauss and other German composers of the day, but with hints of what would become Orff's distinctive musical language.

In 1911/1912, Orff wrote Also sprach Zarathustra (Thus Spoke Zarathustra), Op. 14, a large work for baritone voice, three choruses and orchestra, based on a passage from Friedrich Nietzsche's philosophical novel of the same title.[2][3] The following year, he composed an opera, Gisei, das Opfer (Gisei, the Sacrifice). Influenced by the French Impressionist composer Claude Debussy, he began to use colorful, unusual combinations of instruments in his orchestration.

Moser's Musik-Lexikon states that Orff studied at the Munich Academy of Music until 1914. He then served in the military in World War I, during which he was severely injured and nearly killed in a trench cave-in. Afterwards, he held various positions at opera houses in Mannheim and Darmstadt, later returning to Munich to pursue his music studies.

In the mid-1920s Orff began to formulate a concept he called "elementare Musik", or elemental music, which was based on the unity of the arts symbolized by the ancient Greek Muses (who gave music its English name) and involved tone, dance, poetry, image, design, and theatrical gesture. Like many other composers of the time he was influenced by the Russian-French émigré Igor Stravinsky. But while others followed the cool, balanced "neoclassic" works of Stravinsky, it was works like the composer's Les noces (The Wedding), a pounding, quasi-folkloric evocation of prehistoric wedding rites, that appealed to Orff. He also began adapting musical works of earlier eras for contemporary theatrical presentation, including Claudio Monteverdi's opera L'Orfeo (1607). Orff's German version, Orpheus, was staged in 1925 in Mannheim, Germany, under Orff's direction, using some of the instruments that had been used in the original 1607 performance. The passionately declaimed opera of Monteverdi's era was almost unknown in the 1920s, however, and Orff's production met with reactions ranging from incomprehension to ridicule.

In 1924 Dorothee Günther and Orff founded the Günther School for gymnastics, music, and dance in Munich, where he was from 1925 until the end of his life the head of a department and where he worked with musical beginners. This is where he developed his theories in music education, having constant contact with children. In 1930, Orff published a manual titled Schulwerk, where he shares his method of conducting. Before writing Carmina Burana, Orff edited 17th century operas. Nevertheless, these various activities brought Orff very little money.

Orff's relationship with German fascism and the Nazi Party has been a matter of considerable debate and analysis. His Carmina Burana was hugely popular in Nazi Germany after its premiere in Frankfurt in 1937. Given Orff's previous lack of commercial success, the monetary factor of Carmina Burana's acclaim was significant to him. But the composition, with its unfamiliar rhythms, was also denounced with racist taunts.[4] He was one of the few German composers under the Nazi regime who responded to the official call to write new incidental music for A Midsummer Night's Dream after the music of Felix Mendelssohn had been banned – others refused to cooperate in this.[5] Defenders of Orff note that he had already composed music for this play as early as 1917 and 1927, long before this was a favour for the Nazi government.

Orff was a friend of Kurt Huber, one of the founders of the resistance movement Die Weiße Rose (the White Rose), who was condemned to death by the Volksgerichtshof and executed by the Nazis in 1943. Orff by happenstance called at Huber's house on the day after his arrest. Huber's distraught wife begged Orff to use his influence to help her husband, but Orff denied her request. If his friendship with Huber came out, he told her, he would be "ruined". Huber's wife never saw Orff again. Wracked by guilt, Orff would later write a letter to his late friend Huber, imploring him for forgiveness.[6][7]

Nonetheless, he had a long friendship with German-Jewish musicologist, composer and refugee Erich Katz,[8] who fled Nazi Germany in 1939. 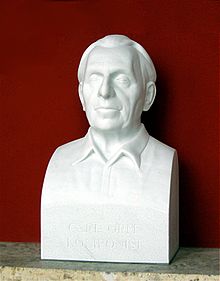 Following World War II, during his denazification process in Bad Homburg, Orff claimed to an American officer, Newell Jenkins (subsequently an orchestral conductor), that he had helped establish, and had been a member of, the White Rose resistance movement.[6] There was no evidence for this other than his own word, and other sources dispute his claim. Canadian historian Michael H. Kater made in earlier writings a particularly strong case that Orff collaborated with Nazi authorities,[9] but in Composers of the Nazi Era: Eight Portraits (2000) Kater rescinded his earlier accusations to some extent. Orff's assertion that he had been anti-Nazi during the war was accepted by the American denazification authorities, who changed his previous category of "grey unacceptable" to "grey acceptable", enabling him to continue to compose for public presentation, and to enjoy the royalties that the popularity of Carmina Burana had brought him.[10]

Most of Orff's later works – Antigonae (1949), Oedipus der Tyrann (Oedipus the Tyrant, 1958), Prometheus (1968), and De temporum fine comoedia (Play on the End of Times, 1971) – were based on texts or topics from antiquity. They extend the language of Carmina Burana in interesting ways, but they are expensive to stage and (on Orff's own admission) are not operas in the conventional sense. Live performances of them have been few, even in Germany.

When Carl Orff died in Munich in 1982 at the age of 86, he had lived through four epochs in the course of his life: the German Empire, the Weimar Republic, Nazi Germany and the post World War II West German Bundesrepublik. Orff was buried in the Baroque church of the beer-brewing Benedictine priory of Andechs, south of Munich. His tombstone bears his name, his dates of birth and death, and the Latin inscription "Summus Finis" (the ultimate goal).

Orff is most known for Carmina Burana (1937), a "scenic cantata". It is the first of a trilogy that also includes Catulli Carmina and Trionfo di Afrodite. Carmina Burana reflected his interest in medieval German poetry. Together the trilogy is called Trionfi, or "Triumphs". The composer described it as the celebration of the triumph of the human spirit through sexual and holistic balance. The work was based on thirteenth-century poetry found in a manuscript dubbed the Codex latinus monacensis found in the Benedictine monastery of Benediktbeuern in 1803 and written by the Goliards; this collection is also known as Carmina Burana. While "modern" in some of his compositional techniques, Orff was able to capture the spirit of the medieval period in this trilogy, with infectious rhythms and easy tonalities. The medieval poems, written in Latin and an early form of German, are often racy, but without descending into smut. "Fortuna Imperatrix Mundi", commonly known as "O Fortuna", from Carmina Burana is often used to denote primal forces, for example in the Oliver Stone movie The Doors..[12] The work's association with fascism also led Pier Paolo Pasolini to use the movement "Veris Leta Facies" to accompany the concluding scenes of torture and murder in his final film Salò, or the 120 Days of Sodom.[13]

With the success of Carmina Burana, Orff disowned all of his previous works except for Catulli Carmina and the Entrata (an orchestration of "The Bells" by William Byrd (1539–1623)), which were rewritten until acceptable by Orff. Later on, however, many of these earlier works were released (some even with Orff's approval). As an historical aside, Carmina Burana is probably the most famous piece of music composed and premiered in Nazi Germany. Carmina Burana was in fact so popular that Orff received a commission in Frankfurt to compose incidental music for A Midsummer Night's Dream, which was supposed to replace the banned music by Mendelssohn. After the war, he claimed not to be satisfied with the music and reworked it into the final version that was first performed in 1964.

Orff was reluctant to term any of his works simply operas in the traditional sense. His works Der Mond (The Moon, 1939) and Die Kluge (The Wise Woman, 1943), for example, he referred to as "Märchenoper" ("fairytale operas"). Both compositions feature the same "timeless" sound in that they do not employ any of the musical techniques of the period in which they were composed, with the intent that they be difficult to define as belonging to a particular era. Their melodies, rhythms and, with them, text appear in a union of words and music.

About his Antigonae (1949), Orff said specifically that it was not an opera, rather a Vertonung, a "musical setting", of the ancient tragedy. The text is an excellent German translation, by Friedrich Hölderlin, of the Sophocles play of the same name. The orchestration relies heavily on the percussion section, and is otherwise fairly simple. It has been labelled by some as minimalistic, which is most adequate in terms of the melodic line. The story of Antigone has a haunting similarity to the history of Sophie Scholl, heroine of the White Rose, and Orff may have been memorializing her in his opera.

Orff's last work, De Temporum Fine Comoedia (Play on the End of Times), had its premiere at the Salzburg Festival on August 20, 1973, performed by Herbert von Karajan and the WDR Symphony Orchestra Cologne and Chorus. In this highly personal work, Orff presented a mystery play, in which he summarized his view on the end of time, sung in Greek, German, and Latin.

Gassenhauer, which Orff composed with Gunild Keetman, was used as the theme music for Terrence Malick's film Badlands (1973). Hans Zimmer later reworked this music for his True Romance (1993) score.

In pedagogical circles he is probably best remembered for his Schulwerk (School Work). Originally a set of pieces composed and published for the Güntherschule (students ranging from 12 to 22),[14] this title was also used for his books based on radio broadcasts in Bavaria in 1949. These pieces are collectively called Musik für Kinder [Music for Children], and also use the term "Schulwerk". The Music for Children volumes were not designed to be performance pieces for the average child. Many of the parts are challenging for teachers to play. They were designed as examples of pieces that show the use of ostinati, bordun, and appropriate texts for children. Teachers using the volumes are encouraged to simplify the pieces, write original texts for the pieces and modify the instrumentation to adapt to the teacher's classroom situation.

Orff's ideas were developed, together with Gunild Keetman, into a very innovative approach to music education for children, known as the Orff Schulwerk. The music is elemental and combines movement, singing, playing, and improvisation.