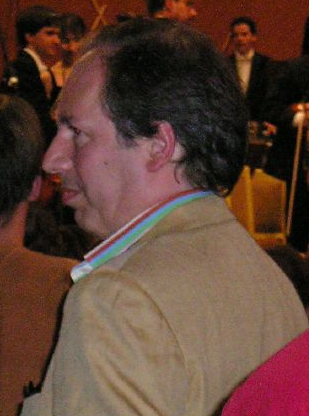 Hans Florian Zimmer (born , in , ) is an , Grammy, and Golden Globe award-winning film score and producer from . He is a film score composer who had integrated the electronic musical world with traditional orchestral arrangements.

Born in am Main. When he was a teenager, Zimmer moved to London. While he lived in London, Zimmer wrote advertising jingles for Air-Edel Associates. [ [http://www.starpulse.com/Music/Zimmer,_Hans/Biography/ Hans Zimmer biography] ] Zimmer began his musical career playing keyboards and synthesizers. In 1980, Zimmer worked with the , a band formed in 1977 with Trevor Horn, Geoff Downs, and Bruce Woolley. Zimmer can be briefly seen in the Buggles music video for "Video Killed the Radio Star" (1979). After working with the Buggles, he started to work for the Italian group , a New Wave band formed in 1976 with Maurizio Arcieri and Christina Moser. He was a featured synthesizer for Krisma’s third album, "Cathode Mamma". [ [http://www.starpulse.com/Music/Zimmer,_Hans/Biography/ Hans Zimmer biography] ] He has also worked with the band Helden (with from ). [ [http://www.spherestudios.com/debi/index.htm Debi Doss – ‘70’s Rock Archive Photographs] ]

In the 1980s, Zimmer partnered with film composer , a prolific film composer who composed scores for over sixty films. Zimmer and Myers co-founded the London-based Lillie Yard recording studio. Together, Myers and Zimmer worked on fusing the traditional orchestral sound with state-of-the-art electronics. [ [http://www.hans-zimmer.com/fr/bio.php Biography: Hans Zimmer] ] Some of their first movies with this new sound include "Moonlighting" (1982), "Success is the Best Revenge" (1984), "Insignificance" (1985), and "My Beautiful Launderette" (1985). In 1986, Hans Zimmer joined , a Scottish-American musician and artist, and , a Japanese musician, composer, producer, and actor, on their Oscar-winning score for "The Last Emperor" (1988). [ [http://www.starpulse.com/Music/Zimmer,_Hans/Biography/ Hans Zimmer biography] ]

Soon after "The Last Emperor", Hans Zimmer began working on his own solo projects. During his solo career years, Zimmer experimented and combined the use of old and new musical technologies. His first solo work for composing a score was for Chris Menges’s film "A World Apart" (1988). However, Zimmer’s turning point in his career came later in that year when he was asked to compose a score for Barry Levinson’s film "Rain Man" (1988). [ [http://www.hans-zimmer.com/fr/bio.php Biography: Hans Zimmer] ] In the score, Zimmer uses synthesizers mixed with steel drums. In a reflection on his greatest scores, Zimmer said that "Rain Man" was a road movie, so the music is full of guitars strings. Zimmer did not want the music to be bigger than the characters, so he kept the music contained and not overbearing. Since the Raymond character saw the world as different from everyone else, Zimmer wanted to compose his own music for a world that does not exist, like in Raymond’s mind. [ [http://www.ew.com/ew/gallery/0,,20216261,00.html 2008 Interview with Entertainment Weekly] ] Zimmer’s score was nominated for an Academy Award for "Rain Man" in 1989.

A year after composing "Rain Man", Hans Zimmer was asked to compose a score for Bruce Beresford's "Driving Miss Daisy" (1989), which won an Oscar for Best Picture. "Driving Miss Daisy’s" instrumentation consisted only of synthesizers and samplers, which were all done electronically by Hans Zimmer. Zimmer won a Grammy Award for "Driving Miss Daisy" in 1991. [ [http://www.hans-zimmer.com/fr/bio.php Biography: Hans Zimmer] ] In 1994, Zimmer won his biggest commercial hit for Disney’s "The Lion King" (1994). Zimmer actually went to South Africa to record the soundtrack for "The Lion King". [ [http://www.hans-zimmer.com/fr/bio.php Biography: Hans Zimmer] ] Zimmer used African choirs, which was inspired by his previous film score for "The Power of One" (1992), which he used African choirs and drums. [ [http://www.ew.com/ew/gallery/0,,20216261,00.html 2008 Interview with Entertainment Weekly] ] "The Lion King" soundtrack won numerous awards, including an Oscar, a Golden Globe, and two Grammys. His soundtrack was then adapted for the Broadway Musical, which won the Tony for Best Musical in 1998.

After the success of "The Lion King", Hans Zimmer wrote numerous film scores. One of his hardest compositions was for "The Thin Red Line" (1998). In an interview, Zimmer said that Terrence Malick, the director, wanted the music before he started filming, so Zimmer had recorded six and a half hours of music. [ [http://www.ew.com/ew/gallery/0,,20216261,00.html 2008 Interview with Entertainment Weekly] ] Even though Hans Zimmer had a hard time composing for "The Thin Red Line", he was very excited to work on his next film, "The Prince of Egypt" (1998). In an interview, Zimmer said that he was able to work with , an Israeli Yemenite singer. He introduced her to the directors, and they thought she was so beautiful that they based one of the characters in the movie to look like her. [ [http://www.ew.com/ew/gallery/0,,20216261,00.html 2008 Interview with Entertainment Weekly] ] For Zimmer, composing had its disadvantages, such as having to compose six hours of music for "The Thin Red Line", and advantages, such as working with singer Ofra Haza.

The 21st century was the biggest mark on Hans Zimmer’s career. He composed film scores for blockbuster hits such as "Gladiator" (2000), "Hannibal" (2001), "The Last Samurai" (2003), "Batman Begins" (2005), "Pirates of the Caribbean: Dead Man’s Chest" (2006), and "The Da Vinci Code" (2006). Zimmer’s 100th film score composition was "The Last Samurai" (2003), for which Zimmer won both a Golden Globe and a Broadcast Film Critics nomination in 2004. [ [http://www.starpulse.com/Music/Zimmer,_Hans/Biography/ Hans Zimmer biography] ] While writing the score for "The Last Samurai", Zimmer felt like he knew nothing about Japanese music. He said in an interview that he had no background with Japanese music, so he researched the music, but the more he researched the music, the more he felt that he knew nothing of it. He even went to Japan to test his music, and when the Japanese heard the music, they wondered how he knew so much about Japanese music. [ [http://www.ew.com/ew/gallery/0,,20216261,00.html 2008 Interview with Entertainment Weekly] ]

After composing over 100 film scores, Zimmer finally performed live for the first time in concert with a 100-piece orchestra and a 100-piece choir at the 27th Annual Flanders International Film Festival. Hans Zimmer has received numerous honors and awards, some of which include: Prestigious Lifetime Achievement Award in Film Composition from the National Board of Review, Frederick Loewe Award in 2003 at the Palm Springs International Film Festival, ASCAP’s Henry Mancini Award for Lifetime Achievement, and BMI's prestigious Richard Kirk Award for lifetime achievement in 1996. Today, Hans Zimmer is considered to be the father of integrating the electronic musical world with traditional orchestral arrangements. [ [http://www.hans-zimmer.com/fr/bio.php Biography: Hans Zimmer] ]

He composed the theme for the boxing series "The Contender" and also produced the soundtracks for the 2005 series "". Other composers like , James Dooley, and work in Zimmer's studio, (formerly known as ). Accomplished composers including , , , , , and are also all former members of the studio. listen
filename=Roll tide wiki.ogg
title=Hans Zimmer - "Roll Tide"
description=listen to a clip from the score of the 1995 film "Crimson Tide".