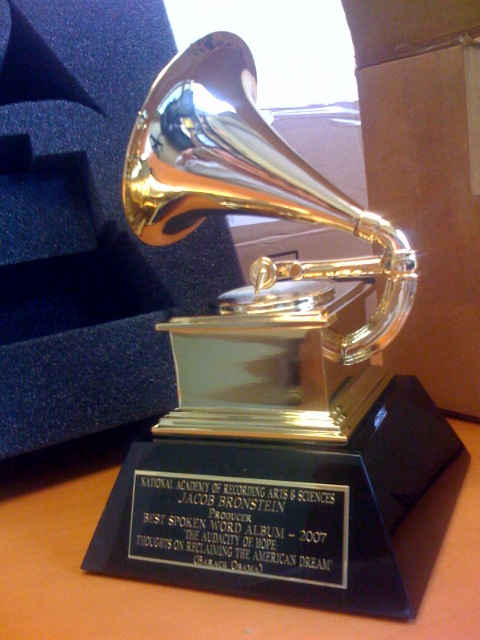 imagesize = 200px
caption = The Grammy awards are named for the trophy: a small, gilded statuette. The trophy is made by [http://www.billingsartworks.com/grammy_making.php Billings Artworks]
current_awards =
description = Outstanding achievements in the
presenter =
country = USA
year = 1958
website = http://www.grammy.com/The Grammy Awards (originally called the Gramophone Awards)—or Grammys—are presented annually by the of the for outstanding achievements in the . The awards ceremony features performances by prominent artists, and some of the more prominent Grammy Awards are presented in a widely-viewed televised ceremony. The current President of the Academy is . The Grammys are considered the highest music honor, the U.S. record industry's equivalent to the Academy Awards (Oscars) for motion pictures. [Thomas O'Neill, The Grammys: The Ultimate Unofficial Guide to Music's Highest Honor. Perigee Trade, 1999]

The awards were established in . Prior to the first live Grammys telecast in 1971 on ABC, a series of taped annual specials in the 1960s called "The Best on Record" were broadcast on . The first Grammy Award telecast took place on the night of November 29, 1959, as an episode of the NBC anthology series "Sunday Showcase", which was normally devoted to plays, original TV dramas, and variety shows. Until 1971, awards ceremonies were held in both New York and Los Angeles, with winners accepting at one of the two. bought the rights to broadcast the ceremony from , and organized the first live telecast. [, "At The Grammys: Behind the Scenes at Music's Biggest Night". New York, Hal Leonard Books, 2007.] bought the rights in 1973 after moving the ceremony to ; the were created for ABC as a result.

Other awards are given for performance and production in specific genres, as well as for other contributions such as artwork and video. Special awards are also given out for more long-lasting contributions to the music industry.

The and record companies are responsible for entering into nomination the works that they deem most deserving. Once a work is entered, reviewing sessions are held by over 150 experts from the recording industry. This is done only to determine whether or not a work is eligible or entered into the proper category for official nomination. The nomination process requires that members vote only in their fields of expertise. They may nominate in the four general categories (Record of the Year, Album of the Year, Song of the Year and ) and in no more than nine out of 31 fields on their ballots. Once the nominations are secured, Recording Academy members may then vote in the four general categories and in no more than eight of the 31 fields. Ballots are tabulated secretly by the major independent accounting firm . [ [http://www.grammy.com/GRAMMY_Awards/Voting/ GRAMMY.com ] ] As of 2006, the eligibility period for the Grammy Awards begins .

Certain musical artists have voiced personal issues with the nature of the Grammys. Singer , of rock band Tool did not attend the Grammys ceremony to receive their award. He explained his reasons:

cquote|I think the Grammys are nothing more than some gigantic promotional machine for the music industry. They cater to a low intellect and they feed the masses. They don't honor the arts or the artist for what he created. It's the music business celebrating itself. That's basically what it's all about.|Maynard James Keenan
url = http://www.nyrock.com/interviews/2002/tool_int.asp
title = Interview with Maynard James Keenan of Tool
author = Gabriella
publisher = NY Rock
year = 2002
month = July

The Grammys are often criticized for failing to represent adequately the sentiments of the public. Some critics have argued that major award shows like the Grammys are merely the recording industry's attempt to congratulate themselves while advertising their products and ideas through the use of in the nomination and award process. Some critics argue that winners naturally reflect "the social, political and artistic preferences of the nominating and voting members."

Other critics within and outside of the industry, question openly whether music award shows are relevant in today's digital society. Award shows like the Grammys appear generally to be relevant agents of change in the industry: regularly observes a spike in an artist or group's album after winning a Grammy Award. Such evidence, however, should naturally be considered in light of .

Additionally, many have criticized the Grammys for distributing many more awards than necessary, and that a large portion of the ceremony is "filler" to result in a longer engagement. [ [http://newcritics.com/blog1/2007/12/08/the-grammy-awards-yours-and-mine/ The Grammy Awards: Yours and Mine] ]

() wrote on his blog , , "While the music industry is doing everything they possibly can to go out of business, can we all make sure to rid ourselves of the Grammys, too? Out of touch old men jacking each other off. ENOUGH! Have a nice day." [ [http://ninblogs.wordpress.com/2007/12/06/a-suggestion/ A Suggestion] ]

() admits to having felt this way in the past:

He was wearing sunglasses when he stated "We called them 'The Grannys'. Snobs, we did not want to hear anything about music from anyone older than us." But, he continues, he changed his mind, not because of the awards themselves, but the telecast's inclusivity: "And then the came on... It was all there: anger, love, forgiveness, family, community, and the deepest sense of history... Here was the full power of American music challenging my arrogance. I watched the rest of the show with new eyes. The Grammys invited , country, rock, soul and classical into the same hall. No regard for demographic studies of what would deliver ratings, no radio call-out research-- a mad amalgam of the profound and the absurd and the creeping realization that one man's Mozart is another man's Vegas." [, Foreword, in , "At The Grammys: Behind the Scenes at Music's Biggest Night". New York, Hal Leonard Books, 2007.]