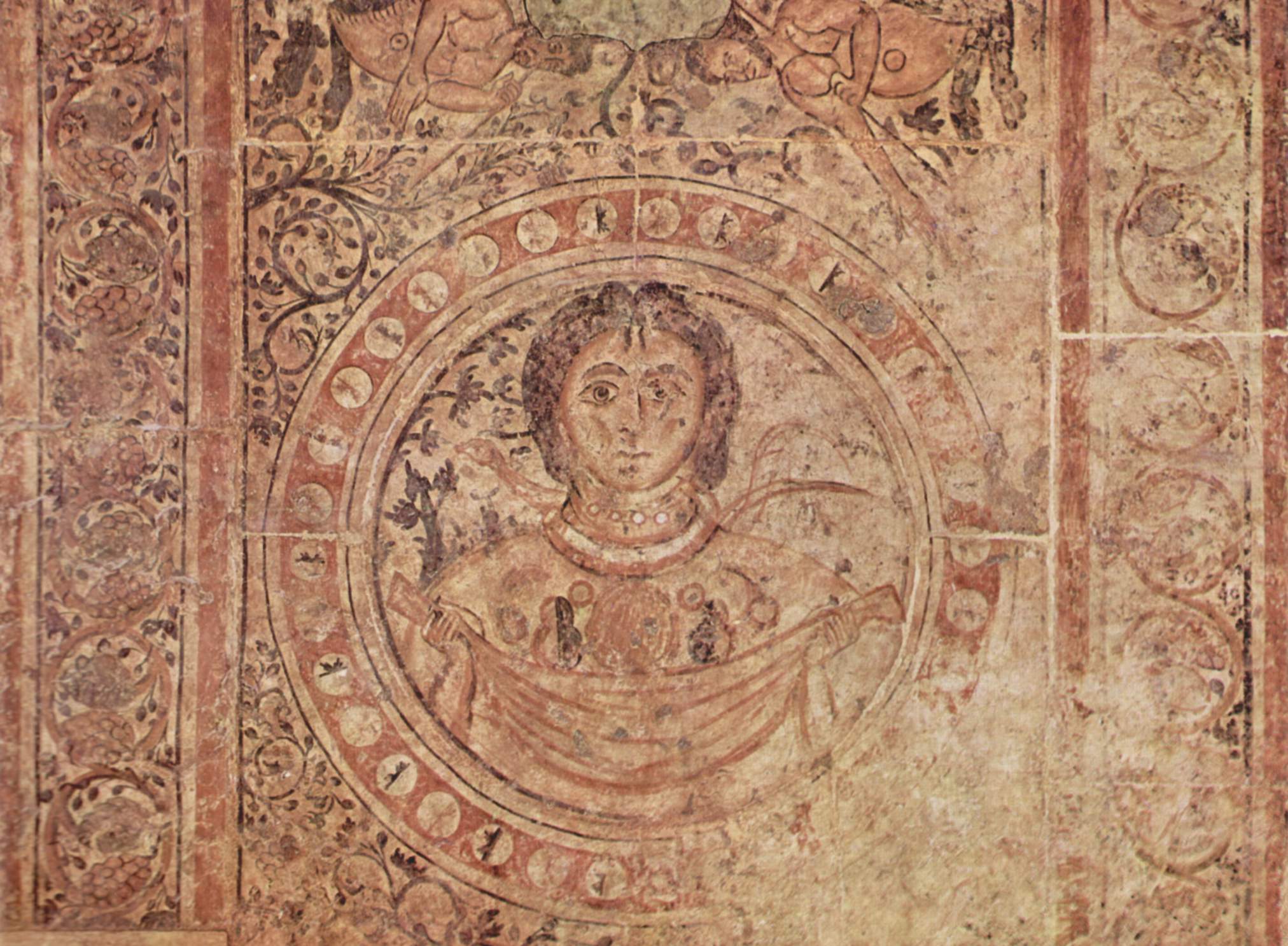 Gaia (pronEng|ˈgeɪə or IPA|/ˈgaɪə/) ("land" or "", from the Ancient Greek Γαîα; also Gæa or Gea (Modern Greek Γῆ) [The spelling "Gea" is not normally used in modern English.] is the primal Greek personifying the .

Gaia is a primordial and deity in the Ancient Greek pantheon and considered a or "Great Goddess".

Her equivalent in the Roman pantheon was Terra.

's "" (116ff) tells how, after Chaos, arose broad-breasted Gaia the everlasting foundation of the gods of Olympus. She brought forth Uranus, the starry sky, her equal, to cover her, the hills, and the fruitless deep of the Sea, Pontus, "without sweet union of love," out of her own self through . But afterwards, as Hesiod tells it, she lay with her son, Uranus, and bore the World-Ocean , and and the Titans Hyperion and Iapetus, and Rhea, , , and Phoebe of the golden crown, and lovely Tethys. "After them was born the wily, youngest and most terrible of her children, and he hated his lusty sire."

Hesiod mentions Gaia's further offspring conceived with Uranus: first the giant one-eyed Cyclopes: ("thunderer"), ("lightning") and the "bright" : "Strength and might and craft were in their works." Then he adds the three terrible hundred-handed sons of Earth and Heaven, the : , and , each with fifty heads.Uranus hid the Hecatonchires and the Cyclopes in so that they would not see the light, rejoicing in this evil doing. This caused pain to Gaia (Tartarus was her bowels) so she created grey flint (or adamantine) and shaped a great flint sickle, gathering together Cronos and his brothers to ask them to obey her. Only Cronos, the youngest, had the daring to take the flint sickle she made, and his father as he approached Gaia to have intercourse with her. And from the drops of blood and semen, Gaia brought forth still more progeny, the strong and the armoured and the ash-tree Nymphs called the "".

From the testicles of Uranus in the sea came forth . For this, a Greek urged, Uranus called his sons "Titans," meaning "strainers" for they strained and did presumptuously a fearful deed, for which vengeance would come afterwards; for, as Uranus had been deposed by his son, Cronos, so was Cronos destined to be overthrown by , the son born to him by his sister-wife Rhea. In the meantime, the Titans released the Cyclopes from Tartarus, and Cronos was awarded the kingship among them, beginning a .

After Uranus's castration, Gaia gave birth to Echidna and by . By Pontus, Gaia birthed the sea-deities , , , , and . , a goddess of sloth and laziness, is the daughter of Aether and Gaia.

Zeus hid Elara, one of his lovers, from by hiding her under the earth. His son by Elara, the giant , is therefore sometimes said to be a son of Gaia, the earth goddess, and Elara.

Gaia is believed by some sources (Joseph Fontenrose 1959 and others) to be the original deity behind the Oracle at . She passed her powers on to, depending on the source, , Apollo or . Apollo is the best-known as the oracle power behind Delphi, long established by the time of Homer, having killed Gaia's child Python there and usurped the power. Hera punished Apollo for this by sending him to King as a shepherd for nine years.

s sworn in the name of Gaia, in ancient Greece, were considered the most binding of all.

In classical art Gaia was represented in one of two ways. In Athenian vase painting she was shown as a matronly woman only half risen from the earth, often in the act of handing the baby Erichthonius (a future king of Athens) to Athena to foster ("see" example below).

Later in mosaic representations she appears as a woman reclining upon the earth surrounded by a host of Carpi, infant gods of the fruits of the earth ("see" example below under Interpretations).

Gaia is the titan of Earth and these are her offspring as related in various myths. Some are related consistently, some are mentioned only in minor variants of myths, and others are related in variants that are considered to reflect a confusion of the subject or association.

Etymologically Gaia is a compound word of two elements. "Ge", meaning "", is found in many s, such as (Ge/graphos = writing about Earth) and Geology (Ge/logos = words about the Earth). "*Ge" is a pre-Greek substrate word that some relate to the Ki, also meaning Earth. "Aia" is a derivative of an Indo-European stem meaning "Grandmother". The full etymology of Gaia would, therefore, appear to have been "Grandmother Earth" [This topic has been discussed on various Indo-European fora such as [http://groups.yahoo.com/group/cybalist| cybalist] ] .Some sources, such as anthropologists , and Barbara Walker, claim that Gaia as the Mother Earth is a later form of a who had been venerated in times, but this point is controversial in the academic community. Belief in a nurturing Earth Mother is often a feature of modern "Goddess" worship, which is typically linked by practitioners of this religion to the Neolithic goddess theory. For more information, see the article .

Hesiod's separation of Rhea from Gaia was not rigorously followed, even by the Greek mythographers themselves. Modern mythographers like or Carl A. P. Ruck and Danny Staples, as well as an earlier generation influenced by Frazer's "", interpret the goddesses the "mother," the "daughter" and the "crone," as understood by the Greeks, to be three aspects of a former , who could be identified as Rhea or as Gaia herself. Such tripartite goddesses are also a part of and may stem from the . In (modern ), Rhea was known as , a goddess derived from n Kubau, or . The Greeks never forgot that the Mountain Mother's ancient home was , where a figure some identified with Gaia had been worshipped as "" (the "Mistress of the Animals") or simply ("Mistress"), an appellation that could be applied in later Greek texts to , or . In Rome the imported goddess was venerated as , the "Great Mother" or as , "Our Mother" and identified with Roman Ceres, the grain goddess who was an approximate counterpart of Greek Demeter, but with differing aspects and venerated with a different cult. Her worship was brought to Rome following an of the that Rome could not defeat the Carthaginian until the worship of Cybele came to Rome. As a result she was a favoured of Roman legionaries, and her worship spread from Roman military encampments and military colonies.

The idea that the fertile earth itself is female, nurturing mankind, was not limited to the Greco-Roman world. These traditions themselves were greatly influenced by earlier cultures in the Central area of the . In Sumerian mythology influenced Biblical notions of in 1. The title "The mother of life" was later given to the Akkadian Goddess Kubau, and hence to Hurrian Hepa, emerging as Hebrew Eve (Heva) and Phygian Kubala (). In the Great Mother, the mother of himself, was known as "", "Hlódyn", or "Fjörgyn". The Irish s worshipped Danu, whilst the Welsh Celts worshipped . Dana played an important part in Hindu mythology and hints of their names throughout Europe, such as the , the , the and Dnepr, suggest that they stemmed from an ancient Proto-Indo-European goddess [ Indo-European scholars at [http://groups.yahoo.com/groups/cybalist| sybalist suggest *Don may come from a Proto-Indo-European root meaning "Swift" as applied to the flowing rivers mentioned ] . In Gaia - is daughter of Sun and Moon. Also she is wife of (). In Pacific cultures, the Earth Mother was known under as many names and with as many attributes as cultures who revered her for example whose creation myth included Papatuanuku, partner to Ranginui - the . In South America in the a cult of the Pachamama still survives (in regions of , , , and ). The name comes from Pacha (Quechua for change, epoch) and Mama (mother). While ancient Mexican cultures referred to Mother Earth as that means "Revered Mother Earth". In Indian religions, the Mother of all creation is called "", a surprisingly close form of Gaia.

Only in is the reverse true - is the Earth Father while Nut is the Sky Mother.

suggested that the archetypal mother was a part of the of all humans, and various Jungian students, e.g. and have argued that such mother imagery underpins many mythologies, and precedes the image of the paternal "father", in such religious systems. Such speculations help explain the universality of such mother goddess imagery around the world.

The Upper Paleolithic Venus figurines have been sometimes explained as depictions of an similar to [Christopher L. C. E. Witcombe, " [http://witcombe.sbc.edu/willendorf/willendorfwomen.html Women in the Stone Age] ," in the essay "The Venus of Willendorf" (accessed , )]

Many Neopagans actively worship Gaia. Beliefs regarding Gaia vary, ranging from the common n belief that Gaia is the Earth (or in some cases the spiritual embodiment of the earth, or the Goddess of the Earth), to the broader Neopagan belief that Gaia is the goddess of all creation, a "Mother Goddess" from which all other gods spring. Gaia is sometimes thought to embody the planets and the Earth, and sometimes thought to embody the entire universe. Worship of Gaia is varied, ranging from prostration to druidic ritual.

Unlike Zeus, a roving nomad god of the open sky, Gaia was manifest in enclosed spaces: the house, the courtyard, the womb, the cave. Her sacred animals are the serpent, the lunar bull, the pig, and bees. In her hand the narcotic poppy may be transmuted to a .

Some who worship Gaia attempt to get closer to "Mother Earth" by becoming unconcerned with material things and more "in tune with nature". Others who worship Gaia recognize Gaia as a great goddess and practice rituals commonly associated with other forms of worship. Many sects worship Gaia, even more than worship , , and .Fact|date=February 2007 Some common forms of worship may include prostration, attempting to reach a greater connection to the earth, shamanistic practices, tithing, praising and praying, creating inspired works of art dedicated to the goddess, burning oils and incense, rearing plants and gardens, the creation and maintaining of "Sacred Groves". Other forms of worship may indeed be common, as worship of Gaia is very broad and can take many forms.

The mythological name was revived in 1979 by , in "Gaia: A New Look at Life on Earth"; his was supported by . The hypothesis proposes that living organisms and inorganic material are part of a system that shapes the 's biosphere, and maintains the Earth as a fit environment for life. In some Gaia theory approaches the Earth itself is viewed as an organism with self-regulatory functions. Further books by Lovelock and others popularized the , which was widely embraced and passed into common usage as part of the heightened awareness of planetary vulnerability of the .

Gaia (Gaea) is referenced through the re-naming of a character in 's , "Anthem"."

Gaia is described as the Earth Mother and aids the protagonists in Chris D' Lacey's series. She takes on many animal forms, such as an albino hedgehog (dubbed 'Spikey') and the legendary mate of one of the seven bears that ruled the ice, Sunasala.

*, "Python: A Study of Delphic Myth and its Origins," Berkeley: University of California Press, 1959; reprint 1980
*, "The Gods of the Greeks" 1951
*Carl A.P. Ruck and Danny Staples, "The World of Classical Myth", 1994.
* Gaia's voice is heard throughout the first God of War, voiced by Linda hunt, telling the story of the main character's, Kratos, journey from Spartan general all the way through to his becoming the new god of war. She also appears in God of War 2 and helps Kratos get out of Hades and on his way to exacting revenge against Zeus