Metalcore is a subgenre of heavy metal combining various elements of extreme metal and hardcore punk. The name is a portmanteau of the names of the two genres. The term took on its current meaning in the mid-1990s, describing bands such as Earth Crisis, Deadguy and Integrity.[1] The earliest of these groups, Integrity, began performing in 1988; some modern practitioners of the genre include Killswitch Engage, Underoath, All That Remains, Trivium, As I Lay Dying, Bullet for My Valentine, and The Devil Wears Prada.[2]

Metalcore is distinguished from other punk metal fusions by its emphasis on general heavy metal characteristics as well as breakdowns:[3] slower, intense passages conducive to moshing.[4] The genre has had a saturation of bands in the last five years. Sepultura has been credited to "lay the foundation" for the genre.[5]

Black Flag[6] and Bad Brains,[7] among the originators of hardcore, admired and emulated Black Sabbath. British street punk groups such as Discharge and The Exploited also took inspiration from heavy metal.[8] The Misfits put out the Earth A.D. album, becoming a crucial influence on thrash.[9] Nonetheless, punk and metal cultures and music remained separate through the first half of the 1980s.

Cross-pollination between metal and hardcore eventually birthed the crossover thrash scene, which gestated at a Berkeley club called Ruthie's, in 1984.[10] The term "metalcore" was originally used to refer to these crossover groups.[11] Hardcore punk groups Corrosion of Conformity,[12] Dirty Rotten Imbeciles and Suicidal Tendencies[13] played alongside thrash metal groups like Metallica and Slayer. This scene influenced the skinhead wing of New York hardcore, which also began in 1984, and included groups such as Cro-Mags, Murphy's Law, Agnostic Front[14] and Warzone.[15] The Cro-Mags were among the most influential of these bands, drawing equally from Bad Brains, Motörhead, and Black Sabbath.[16] Cro-Mags also embraced straight edge and, surprisingly enough, Krishna consciousness.[17] Other New York straight edge groups included Gorilla Biscuits, Crumbsuckers, and Youth of Today,[18] who inaugurated the youth crew style.[19] 1985 saw the development of the hardcore breakdown, an amalgamation of Bad Brains' reggae and metal backgrounds,[4] which encouraged moshing. Agnostic Front's 1986 album Cause for Alarm, a collaboration with Peter Steele, was a watershed in the intertwining of hardcore and metal.[20] 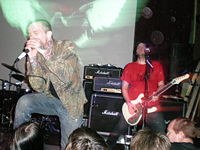 Converge at Neumo's in Seattle, Washington in 2008.

Between 1989 and 1995, a new wave of hardcore bands emerged.[2] These included Merauder, All Out War,[21] Integrity,[22] Biohazard, Earth Crisis,[22][23] Converge,[23] Shai Hulud,[24][25][26] Starkweather, Judge,[23] Strife,[22] Rorschach,[27] Vision of Disorder,[27] and Hatebreed.[22][27][27] Integrity drew influence primarily from the Japanese hardcore terrorism of GISM and the metal of Slayer, with more subtle elements of Septic Death, Samhain, Motörhead, and Joy Division,[28] while Earth Crisis, Converge, and Hatebreed[29] borrowed from death metal.[30] Shai Hulud's Hearts Once Nourished with Hope and Compassion[24][25][26] and Earth Crisis's 1995 album Destroy the Machines were particularly influential.[31] In guitarist Scott Crouse's words,

It was a very mixed reaction. I'm often quoted as saying that Earth Crisis was the first hardcore band with a metal sound. Of course we weren't the first, but I think we definitely took it to another level. We heard a lot of, 'These guys are trying to be Pantera,' which we all took as a great compliment![31]

Biohazard, Coalesce,[32] and Overcast were also important early metalcore groups. These groups are sometimes referred to as "metallic hardcore".[33][34] As journalist Lars Gotrich writes, "Along with key records by Dillinger Escape Plan and Botch, Give Them Rope is an underground milestone that helped pioneer what was soon called 'metalcore.' At the risk of sounding too reductive — too late! — metalcore was the natural progression where extreme metal and hardcore met, but with spiraling time signatures that somehow felt more aggressive."[35]

In the early 1990s, a third wave of metalcore groups appeared, who placed significantly greater emphasis on melody. These bands tend to fuse melodic death metal, hardcore punk and emo.[36] Melodic metalcore bands include Atreyu,[36][37][38] Avenged Sevenfold,[38] Bullet for My Valentine,[39] Darkest Hour, Eighteen Visions,[37] Killswitch Engage[36][40] and Poison the Well.[37] These groups took major influence, cues, and writing styles from Swedish melodic death metal bands, particularly At the Gates,[37] Arch Enemy, In Flames and Soilwork.[41] Melodic metalcore frequently makes use of clean vocals.[40][42][43] Some of these groups, such as Shadows Fall, have voiced an affection for '80s glam metal.[44] Melodic metalcore groups have been described as "embrac[ing] '80s metal clichés", such as "inordinate amounts of smoke machines, rippin' solos, [and] three bass drums".[38]

In the mid-2000s, metalcore emerged as a commercial force, with several independent metal labels, including Century Media and Metal Blade, signing metalcore bands. By 2004, metalcore had become popular enough that Killswitch Engage's The End of Heartache,[45] and Shadows Fall's The War Within[46] debuted at numbers 21 and 20, respectively, on the Billboard album chart. All That Remains' single "Two Weeks" peaked at number nine at the Mainstream Rock Tracks chart in the U.S. The song peaked on the Modern Rock Tracks chart at number 38. In 2007, the song "Nothing Left" by As I Lay Dying was nominated for a Grammy award in the "Best Metal Performance" category. An Ocean Between Us (the album that included "Nothing Left") itself was a commercial success, debuting at #8 on the "Billboard 200". Welsh metalcore band Bullet for My Valentine's second album, Scream Aim Fire, went straight to #4 on the Billboard 200,[47] later surpassing this in 2010 with their third album Fever, which debuted at #3 selling more than 71,000 copies in its first week in the U.S.A. and more than 21,000 in the UK. Underoath's fifth album Define the Great Line, released in 2006, peaked at #2 on the Billboard 200 charts, selling 98,000 copies in its first week.[48] The Devil Wears Prada has achieved much commercial success with their album, With Roots Above and Branches Below, peaking at #11 on the Billboard 200 upon its release.[49] Trivium has met with very strong success, making top 25 positions on the charts in several countries, including the USA, and top 10 positions in both Australia and the UK, even making Gold status in the UK. Hatebreed, God Forbid, and As I Lay Dying have also charted.[50][51][52] Underoath's album Lost in the Sound of Separation reached #8 on the Billboard 200 and sold 56,000 copies in its first week of sales in the U.S. alone,[53] with Killswitch Engage's self-titled fifth album reaching #7 on the Billboard 200 and selling 58,000 copies.[54] Another recent success is the album "Reckless & Relentless" by British band Asking Alexandria, reaching up to now #9 on the Billboard 200, selling 31,000 in its first week. The most recent success is the album "Dead Throne" by Christian band The Devil Wears Prada, debuting at #9 on the Billboard 200, selling 32,400 in its first week.

The vocalizing technique in metalcore is generally screamed vocals, particularly common among many 1990s metalcore groups. Today many metalcore bands combine screamed vocals throughout with the use of clean vocals usually during the bridge or chorus of a song.

Harmonized guitar riffs, double bass drumming, and breakdowns are common in metalcore. Drop guitar tunings are used almost universally, earlier bands usually used either Drop D or C tunings. More recently certain bands have been known to tune as low as Drop A. Drummers typically use a lot of double bass technique and general drumming styles across the board. Blast beats are also seen at times.

Metalcore emerged from the milieu surrounding youth crew hardcore punk subculture, with many of the groups adhering to straight edge beliefs (abstention from drugs and alcohol), although Integrity was a notable exception.[2] Converge was notable for their focus on personal anguish and experiences of failed romantic love.[55][56] Dwid Hellion, frontman of Integrity, advocated the "Holy Terror Church of Final Judgment", an apocalyptic belief system related to Gnosticism and Catharism.[57] Several members of contemporary metalcore bands are practicing Christians, including members of Zao,[58] The Devil Wears Prada, As I Lay Dying,[59] August Burns Red, Texas in July, Demon Hunter, Oh, Sleeper and Underoath.[60][61]

Mathcore began with the mid-'90s work of Converge,[62] Botch[63][64] and The Dillinger Escape Plan.[65] The term mathcore is suggested by analogy with math rock. Mathcore is characterized by speed, technical riffing, and unusual time signatures.[66][67] Bands such as Fear Before are bands that incorporate metalcore standards along with odd time signatures and progressive elements.[68]

Deathcore is an amalgamation of metalcore, hardcore punk and death metal.[69][70][71] Deathcore is defined by breakdowns, blast beats and death metal riffs.[72][73] Bands also incorporate guitar solos and melodic riffs similar to those in metalcore.[69]