Neo-classical metal is a subgenre of heavy metal music that is heavily influenced by classical music. It refers to a very technical performance[1][Note 1] consisting of elements borrowed from both classical and heavy metal music. Yngwie Malmsteen, the most notable musician in the sub-genre, contributed greatly to the development of the style in the 1980s.[1][Note 2] Four others of the most noted players in this genre are Jason Becker, Tony MacAlpine and Vinnie Moore[1][Note 3] & Shawn Lane[citation needed].

Neo-classical metal takes its name from a broad conception of classical music. In this it is a concept distinct from how neoclassicism is understood within the classical music tradition. Neoclassical music usually refers to the movement in musical modernism in which composers gained influence from the Classical period. This period roughly spans the years from 1750 to 1810 with the best known composers of strictly classical music including Mozart and Haydn and also Beethoven during the early part of his career before he laid the musical foundations of the romantic movement in music. The classical period was a time in which rigidly structured musical forms such as the sonata, symphony and string quartet were developed. Musical Neoclassicism developed roughly a century after the end of the classical period and peaked during the years in between the two World Wars. It was a reaction against late 19th and early 20th Century romanticism as embodied in the works of composers such as Richard Wagner and Gustav Mahler who had stretched both musical language and musical form to produce massive works where the limits of tonality were broken. Neoclassical composers include both Igor Stravinsky[2] and Paul Hindemith[3] who fused elements from the Classical period, such as a "common practice" harmony and strict adherence to form, with their own unique "advanced" harmonic vocabularies and rhythmic variety.[citation needed]

On the other hand, neo-classical metal music does not restrict itself to a return to classical aesthetic ideals, such as equilibrium and formalism. Its influences include both the Romantic musical period and the Baroque period of the seventeenth and first half of the eighteenth centuries. The music of late Baroque composers such as Vivaldi, Handel and Bach was often highly ornate. Neo-classical metal musicians such as Yngwie J. Malmsteen are inspired by this aspect of Baroque music[1][Note 4] and also by later virtuoso composers such as the violinist Niccolò Paganini in using runs and other decorative and showy techniques in their performances. Indeed several neo-classical Metal musicians have performed their own versions of Paganini's famous 24th caprice.

History of the genre and influences 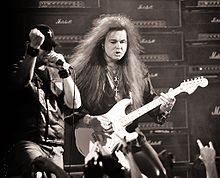 The 1980s saw the birth and rise of neo-classical metal as a distinct subgenre, although classical influences could be heard in the compositions and improvisations of prominent musicians from the earliest beginnings of heavy metal throughout its evolution. Early classical influences within hard rock and heavy metal are most notably found in the playing of Ritchie Blackmore, Uli Jon Roth and Randy Rhoads. The styling existed mainly with guitarists but was also present with other instrumentalists, such as Yes keyboardist Rick Wakeman.

The "golden age" of neo-classical metal in the middle to late 1980s revolved around the sizeable roster of flashy electric-guitar soloists who recorded mostly instrumental albums for Mike Varney's Shrapnel Records label. Swedish guitarist Yngwie Malmsteen, widely regarded as the originator[Note 5] and still-reigning king of neo-classical metal,[4] was brought to the United States by Varney to sign with Shrapnel Records in 1982. Malmsteen drew influence from both rock and classical idioms from a young age in developing his hyper-amplified, hyper-fast technique on the electric guitar; Malmsteen's style in turn inspired countless imitators from the moment his earliest Shrapnel recordings appeared.

In recent years, appreciation of the neo-classical metal oeuvre has been largely confined to guitarists in more of an underground setting, as the style is not well known beyond the realm of guitarists. Today, there are many more bands that contribute as a whole as opposed to the "solo" musicians in the past. Some of today's notable neo-classical metal performers are Michael Angelo Batio, Vitalij Kuprij, Trans-Siberian Orchestra, Mark Wood, Joe Stump, Cacophony, Symphony X, Stratovarius, Rata Blanca, Narnia, Rhapsody of Fire, Time Requiem, At Vance, Galneryus, Mastercastle, Versailles, Sound Horizon, Necrophagist, Heavenly, Concerto Moon, Fleshgod Apocalypse, Adagio, Dark Moor, Warmen, and Artension. Even more recently there has been a sudden burst of slight neo-classical influence within mainstream metal acts such as Children of Bodom, Protest the Hero and The Human Abstract. On disc two of her instrumental album Laced/Unlaced, violinist Emilie Autumn performs classical-inspired "shred" solos with heavy distortion on the electric violin, reminiscent of neo-classical metal guitar solos.

A common practice in the genre is to transcribe classical pieces and play them in a rock/metal band format. The Baroque and Classical periods have been particularly influential to the genre because of their unique sound and techniques that blend into a rock setting effectively. Some of the techniques used include counterpoint and pedal point.