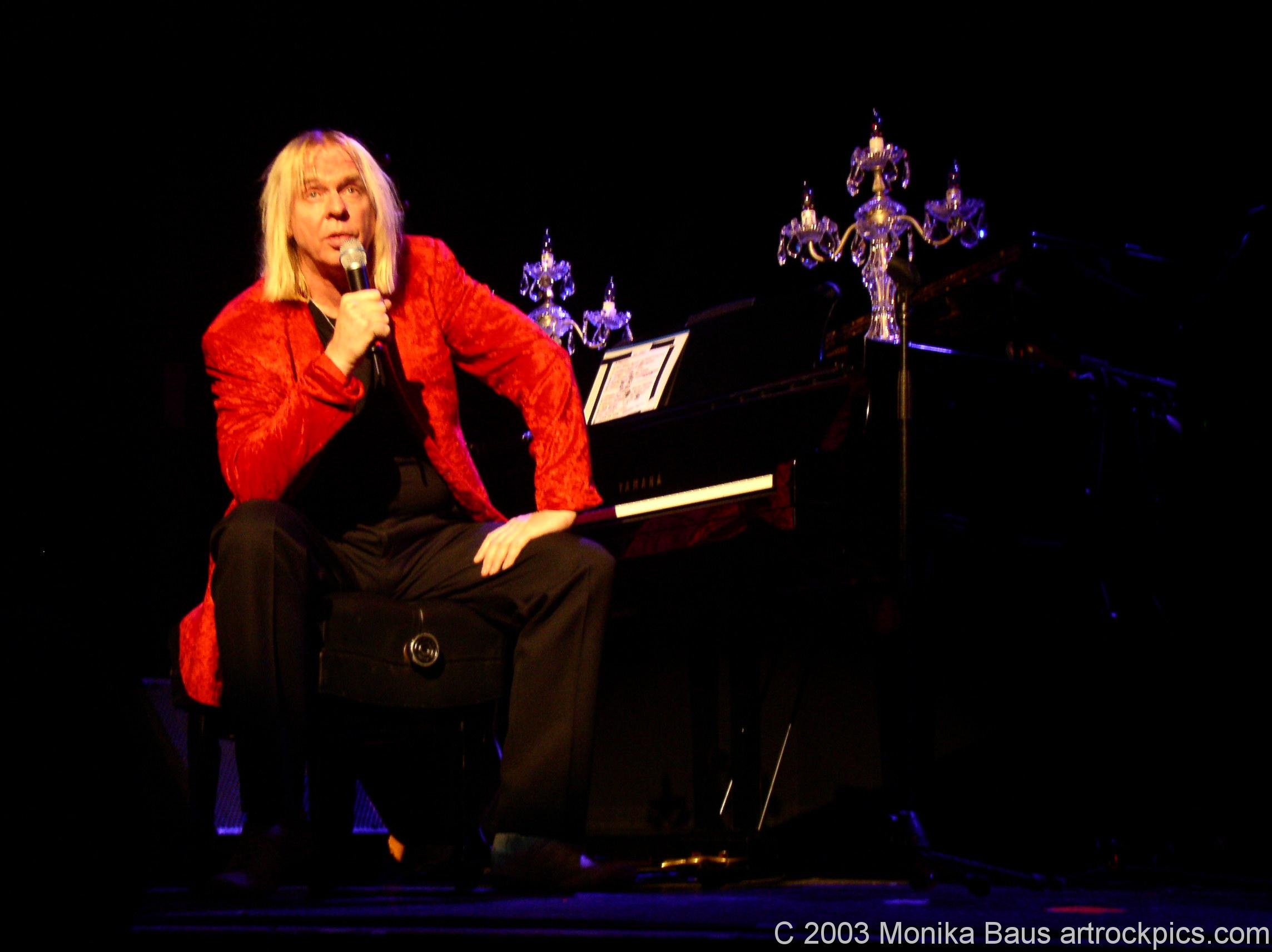 Richard Christopher Wakeman (born in , ) is an English best known as the keyboardist for group Yes. Originally a classically trained pianist, he was a pioneer in the use of electronic keyboards and in the use of a rock band in combination with and .Fact|date=July 2007 He purchased his first electronic keyboard, a , from the actor . Wakeman was able to buy it for half the regular selling price because Wild thought it did not work as it only played one note at a time. [A conversation with Rick Wakeman and in the 2004 documentary "Moog".] He hosts a regular radio show on Planet Rock.

Wakeman was born in the suburb of , West London, and attended Drayton Manor Grammar School. He initially studied , , and modern music at the , but he left of his own accord after a year and a half in favour of work as a session musician.

In 1970, Wakeman played with and was an active studio musician, playing with such artists as , and notably playing piano on Bowie's and , and by . He joined Yes in 1971, after keyboardist Tony Kaye was asked to leave the band because of his refusal to play anything more than the . His first album with the band was "Fragile" released 1971 in the UK and 1972 in the US, and very nearly his last was "", released in 1973. He also played on the studio album "" (his favourite Yes album) and his live performances with the group were released as "". He left the band following the Tales from Topographic Oceans tour.

During his time with Yes, he released his first solo album, "The Six Wives Of Henry VIII", which showcases his skills with various electronic and acoustic keyboard instruments. Some members of Yes played their respective instruments on certain tracks.

In 1975, he released the concept album which was supported by a live show featuring ice skating theatrical performances accompanied by a large number of musicians, an orchestra and choirs. The cost of the show was and it caused Wakeman to declare . [ [http://www.soundonsound.com/sos/1995_articles/nov95/rickwakeman.html?print=yes Rock And Roll Circus ] ] [ [http://www.amiannoying.com/(S(3grkgra0olmjfx552rfjn5rv))/view.aspx?id=7641&collection=3607 AmIAnnoying.com ] ] Of all the members of the band, Wakeman is the only non-vegetarian, a difference which contributed to his first departure from the bandFact|date=June 2007. The primary reason for that initial departure, however, was musical differences. Wakeman felt "Tales from Topographic Oceans" was thin on substance and did not connect with its themes. Further, he did not enjoy the experience of reproducing the entire work on stage each night. He felt the length of the songs prohibited the band from playing many of their more popular songs of the time. Following the tour, as the band began work on what would become "", Wakeman felt further alienated from the group. Disenchanted with the direction in which Yes were going, and already into a successful solo career, Wakeman jumped ship.

He rejoined Yes for their 1977 album "". He remained until their next album, "", a year later. He is reputed to have given the album its name by throwing a at a showing of the art used for the album's cover.Fact|date=July 2007

In 1989, he joined with three fellow ex-Yes members to form (a.k.a. "ABWH"). After ABWH's first album, some of the completed tracks for a planned second album were merged with tracks from an in-progress Yes album to create the album Union. Wakeman, along with the combined members of both bands then joined to form a Yes supergroup (made up of past and present members of Yes) for the subsequent tour in 1991. When the tour ended a year later, Wakeman left again. He then returned in 1996 for the "Keys to Ascension" albums but left before the band could tour. In 2002, he rejoined Yes and has been with the group ever since, but also enjoys a successful solo career.

He has also performed as a guest or session musician for artists as disparate as:
*John Williams,
*,
*,
*,
* (notably mellotron on 'Space Oddity', piano on 'Life On Mars' and 'Changes'),
* (including piano on Stevens' hit cover of the hymn ""),
*T. Rex,
*,
* (playing keyboards on "Sabbra Cadabra" and "Who are You" on 1973's ""),
*
* and played piano on "There's no one quite like Grandma"Fact|date=July 2007 by . This was refuted by Rick himself on Friday 22 August 08 at the Edinburgh Book Festival whilst being interviewed by Ian Rankin. He pointed out that he did however play on Clive Dunn's "There's no one quite like Grandma", a follow up to his "Grandad" No.1 (apparently it was not very successful).

Although Wakeman was a noted player of the and the , he also played a key part in the popularisation of the &ndash; an that used a bank of prerecorded tape strips, activated by each key on its keyboard. It proved too unwieldy and unreliable for regular touring, and Rick eventually doused his in petrol and set fire to it in a field [ [http://www.8trackheaven.com/birotron.html The Birotron ] ] . Undeterred, Rick worked with David Biro to develop the , which used the then popular cassette format rather than bare tape strips. Only 35 Birotrons were produced, it was not a commercial or technical success, and Rick eventually threw his across the stage after it broke down mid-concert, an action he now regrets, as there are only 6 known remaining examples. [ [http://www.8trackheaven.com/birotron.html The Birotron ] ]

He has written the soundtracks for two films by : (1975), which features vocals from and which takes as its starting point the music of and ; and Crimes of Passion (1985), much of which is built around themes taken from Dvořák's .

As announced on the official Yes website, Rick Wakeman would not be joining Yes on their 40th Anniversary tour, he would instead be replaced by his son (the tour was cancelled because of Jon Anderson's poor health). In 2008, Wakeman has been touring with a solo show, "Rick Wakeman's Grumpy Old Picture Show", an evening of biography, stories and music.

A self-confessed former , he had several heart attacks in his twenties. The first of them occurred just after he first left Yes in early 1974, during the release of "Journey To The Centre Of The Earth". He married former Page Three model , although they have since divorced. He has had a renewal of his Christian faith, [ [http://www.rwcc.com/sayyes.asp RWCC > Say Yes - The Autobiography ] ] which began around the time of their marriage.Fact|date=June 2007

Children include , , Oscar Wakeman, Jemma Wakeman, Ben Wakeman, and Manda Wakeman, who have inherited their father's interest in music.

A passionate football fan, Wakeman has supported since he was a child, and later on he also became a director of the West London club. After a disagreement with the board, he moved on to but never stopped loving the Bees. He was also involved in the ownership of the American soccer club in the late , along with other rock celebrities such as and .

He is a strong supporter of the UK's Conservative Party, and performed a concert in September 2004 for the benefit of the party. The "Arthur" section of his "King Arthur and the Knights of the Round Table" suite has been used as the theme tune to the BBC's Election Night Coverage since 1979 (with the exception of 2001). Wakeman's album "Fields of Green '97" featured the track "Election '97/Arthur", which was used by the BBC for their coverage of the 1997 General Election. The music was further revamped for the BBC's 2005 Election Night coverage.

Rick can currently be seen as a contributor on BBC Two's series, "Grumpy Old Men". He has also appeared in a number of episodes of Countdown; about twenty per year, according to Wakeman. He currently (2008) presents a weekly Saturday morning programme, "Rick's Place", on Planet Rock. He has also appeared on the satirical panel show "" as a guest.

Rick appeared as himself in "Journey to the Centre of Rick Wakeman", the last episode of season two of "", a comedy programme. The episode detailed a fictional war between England and Wales in 2009 which only Rick could stop. The majority of the episode was set inside Rick where Mitch and his team are sent to rouse him from a coma and thus stop the war. Wakeman provided piano for Benn's 2008 single "Sing Like an Angel", which was released on .

In December 2006, Rick was the guest host for an episode of , a BBC Radio 4 programme where the panel stay the same and the host changes each week. The questions set in the programme are all about the host. Rick set a challenge for a new concept album idea, and the comedian Will Smith suggested "Spiders and Other Invertebrates". Rick said he liked that idea so much, he would include a track of his next album called "Spiders and Other Invertebrates", and would include a sleeve credit to Will. Will responded by saying that Rick had "...just made my life". [ [http://www.bbc.co.uk/radio4/personality_test/pip/t8wos/ BBC - Radio 4 - The Personality Test - 14 December 2006 ] ]

Rick has been president of the show business charity The Heritage Foundation (formerly ) for the past two years. The charity erects blue plaques on the homes and/or work-places of late entertainers and sportspeople. He is also Honorary President of the , a UK-based organisation helping to promote classic and progressive rock. In October 2007 Rick commenced a new tour 'Rick Wakeman's Grumpy Old Picture Show', where Rick accompanies video performers such as and the English Rock Ensemble( Ashley Holt, Lee Pomeroy, Dave Colquhoun and Tony Fernandez)

In December 2006 and 2007, Rick was the celebrity who turned on the Christmas lights in , , a town close to his home.

olo and with his son Adam