The New Wave of British Heavy Metal (frequently abbreviated as NWOBHM and pronounced /n.ˈwɒbm/) was a heavy metal movement that started in the late 1970s, in Britain, and achieved international attention by the early 1980s. The movement developed as a reaction in part to the decline of early heavy metal bands such as Deep Purple, Led Zeppelin and Black Sabbath.[1] NWOBHM bands toned down the blues influences of earlier acts, incorporated elements of punk, increased the tempo, and adopted a "tougher" sound, taking a harder approach to its music.[1] It was a scene directed almost exclusively at heavy metal fans.[1] The era is considered to be a major foundation stone for the extreme metal genres; acts such as the American metal band Metallica cite NWOBHM bands like Saxon, Motörhead, Diamond Head, and Iron Maiden as a major influence on their musical style.[1][2]

The NWOBHM came to dominate the heavy metal scene of the early-mid 1980s. NWOBHM was musically characterized by fast upbeat tempo songs, power chords, fast guitar solos and melodic, soaring vocals, with lyrical themes often drawing inspiration from mythology and fantasy fiction. Many of the bands of this era were signed to Neat Records, who has released volumes of NWOBHM compilations in later years.[3][4][5]

The Welsh group Budgie are considered precursors to the movement for they have been cited as "a seminal influence on the New Wave of British Heavy Metal".[6] Also Judas Priest, while pre-dating the movement by several years, would later become a part of it.[7] 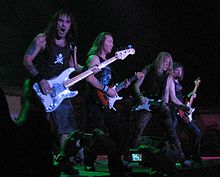 The early movement was associated with acts such as Iron Maiden, Def Leppard, Saxon, Angel Witch, Raven, Girlschool, Diamond Head, Samson,[1][8][9] Motörhead,[1][8] Tygers of Pan Tang,[1][9] Blitzkrieg, Sweet Savage, Jaguar,[9] Avenger, Demon and Tank. The image of bands such as Saxon, consisting of long hair, denim jackets, leather and chains, would later become synonymous with heavy metal as a whole during the 1980s. Some bands, although conceived during this era, saw success on an underground scale, as was the case with Venom and Quartz.

The New Wave of British Heavy Metal suffered the same decline as many other musical movements. Many of the movement's leaders were unable to follow up on their initial successes. In addition, many bands moved further away from the era towards mainstream hard rock, with Def Leppard in particular targeting the American market with a more refined sound despite having major success. By the mid 1980s, young rock fans found a more commercial metal scene emanating from Los Angeles led by bands such as Mötley Crüe and Poison. Record companies also latched onto the Los Angeles artists over the more underground NWOBHM bands. In addition, thrash metal, another new but much less mainstream metal scene, emerged around the same time, and attracted many rock fans for being even faster and even heavier than NWOBHM, despite originating from the movement.[8]

Some of the more popular bands of the movement, however, went on to considerable, lasting success. Iron Maiden and Motörhead stayed with a more traditional heavy metal style, allowing them to retain a large and loyal fanbase even after bands with a similar sound had lost record company support. Iron Maiden has since then become one of the most commercially successful and influential heavy metal bands of all time. Def Leppard, despite discarding their earlier, heavier sound, became even more successful when they used MTV to play their promotional music videos, and thus commercializing their hard rock sound in order to help sales of their albums on strengths of singles.[10]

Groups such as Motörhead, Iron Maiden, Venom, and Saxon, as well as many lesser-known ones, became part of the canon that influenced American bands that formed in the early eighties, such as Metallica. Metallica's early material has been influenced by a number of NWOBHM bands, including Diamond Head.[11]

In 1990 Lars Ulrich of Metallica, along with Geoff Barton compiled a double CD compilation album, entitled NWOBHM '79 Revisited, featuring bands as obscure as Hollow Ground right through to the major acts of the era.[9]

The widespread popularity of the internet in the late 1990s/early 2000s helped the New Wave of British Heavy Metal fans to communicate again and some NWOBHM bands experienced a minor revival. Encouraged by the success of tribute bands and nostalgia acts, many of the original NWOBHM bands reformed for successful tours and the revival was championed by Classic Rock magazine, a new publication featuring many of the original NWOBHM writers of the 1980s including Geoff Barton.[12]

During the first Metal Crusade Music Machine tour, Samson, Angel Witch and Iron Maiden – among others – played a gig in London on 8 May 1979. Geoff Barton reviewed the show in Sounds magazine using the term New Wave Of British Heavy Metal to coin a common stylistic element of the bands' music.

The New Wave of British Heavy Metal existed mostly outside the world of the mainstream pop and rock culture. Magazines such as NME, The Face and Melody Maker did not generally feature NWOBHM acts at all. It was left therefore to Sounds to feature NWOBHM artists. Geoff Barton began writing features on the new up and coming metal bands and Sounds even featured a weekly Heavy Metal chart compiled from record requests at “The Soundhouse”, a heavy metal 'disco' in North West London and the spiritual home of the movement. Barton set up Kerrang!, the first magazine exclusively devoted to heavy metal. Making a massive impact for the genre in London, both on air and with their own 'roadshow' with many appearances in rock pubs & clubs, was pirate rock station Alice's Restaurant Rock Radio.

This is a list of bands signed to record labels who emerged during the NWOBHM era of music: