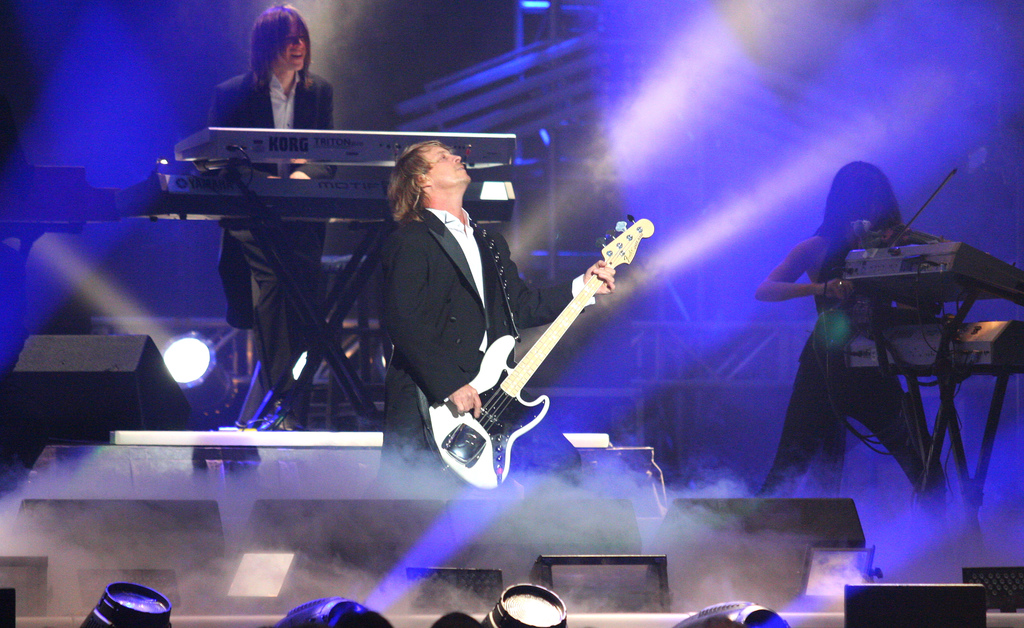 Trans-Siberian Orchestra (often abbreviated as TSO) is a rock founded by Paul O'Neill, , and in 1996. The band's musical style is often described in different terms, incorporating , , and heavy metal, with influences from . The group is based in New York City, but frequently tours worldwide, bringing their music to sometimes obscure areas. The Trans-Siberian Orchestra is well known for its renditions of traditional songs. Some of their most well-known works include such songs as (a rendition of ), and , both of which are popular selections of radio DJs during the Christmas season.

The Trans-Siberian Orchestra was founded in 1996 in by composers Paul O'Neill and , and lead singer . The group's name is inspired by the in which Kinkel says connects many cultures otherwise isolated, much like music.

O'Neill had managed and produced rock bands including , , and Scorpions, later writing for and producing Savatage, where he began working with Kinkel and Oliva. The concept for a band playing s in a style was not received warmly by the industry, but quickly proved a success with adults as well as young people.

In the recording studio, Trans-Siberian Orchestra uses a full 60-piece and a choir. As of 2004, their touring band included fourteen vocalists, fourteen musicians, and two narrators.

Trans-Siberian Orchestra released their debut album "Christmas Eve and Other Stories" in 1996, and it remains their best-selling album. Their 1998 release "The Christmas Attic" was similarly a concept album with a theme. This album featured what remains one of their most recognizable songs, "", a take on Pachelbel's "".

In 2000, they released their first (and to date only) non-Christmas album, "Beethoven's Last Night", a about 's last night on earth, during which he meets Fate, her son Twist, and .

After several years of touring, they returned to the studio and subsequently released another full-length album, "Lost Christmas Eve", and the accompanying /3-CD release "The Christmas Trilogy", which contained all three of their Christmas albums to date.

The band is, as of early 2005, working on a new non-Christmas album, . It was projected to be released in the spring of 2008, according to an announcement made by Paul O'Neill at the December 30, 2007 concert in Cleveland, and is expected to feature the band's rendition of "O Fortuna" from 's "Carmina Burana", performed as a preview by the band during their 2004, 2005, 2006, and 2007 tours. As of now, the album is entering its final stages of development.

Their 2005 tour placed twenty-first on the list of the most successful concert tours of the year, earning just over US$21 million. [ [http://www.pollstaronline.com/sf-ye2005-top100tours.asp PollstarPro: News ] ] The string section comprises local musicians. Live shows are known for their extensive use of , & lights synchronized with the performance, all of which takes 15 hours to set up. [ [http://classicrock.about.com/od/artistprofilesrz/a/tso_review.htm Trans Siberian Orchestra - Concert Review ] ]

Shows are divided into two halves: the first consisting of the story and songs of , the second a mix of songs from , , , and a few miscellaneous covers (including , , and ), finishing with a reprise of .

During recent performances of their 2006 tour, stated that production of the album is currently behind schedule, largely because of the band's perfectionism. This delay echoes the two-year delay in the release of "" and the year-long delay in the release of "". TSO stated, on their website, that they are "buried in the studio" attempting to finish the album. [" [http://www.trans-siberian.com/index-main.php Trans-Siberian Orchestra Official Site] ". URL Accessed , .]

In several cities during their 2007-2008 winter tour, a joke was made on-stage as to what we would be more likely to see in our lifetimes: a McDonald's on Mars, or the release of the long awaited album. This was followed by the band's performance of 'O Fortuna' which will be on the upcoming album.

In the latest edition of TSO's souvenir program there is a page featuring "excerpts from the lyrics on Trans-Siberian Orchestra's upcoming album "Night Castle" copyrighted 2007 . The song is titled "There Was a Life" and is adjacent to a full page photo of on the west coast and a picture of Robert Kinkel on the east coast. This song is not one of the three featured in the concert.

On October 8, Paul O'Neill was interviewed on Seattle's Bob Rivers radio show, he mentioned that during 2008's TSO Xmas tour, more songs will be played from Nightcastle, but the album will not be out until next summer.

Members (past, present and touring only)

*2004: "Christmas Trilogy" – Contains all 3 previous Christmas CDs and one DVD

*, the electrical engineer who choreographed the song "" by the Trans-Siberian Orchestra to his outdoor Christmas lights.
*
*
*
*Twelve-Twenty Four, a TSO Tribute Band in the Northeast United States