Portmanteau
For other uses of "Portmanteau", see Portmanteau (disambiguation).

"Portmanteau word" is used to describe a linguistic blend, namely "a word formed by blending sounds from two or more distinct words and combining their meanings."[4] This definition overlaps with the grammatical term contraction, but a distinction can be made between a portmanteau and a contraction by noting that contractions are formed from words that would otherwise appear together in sequence, such as do and not, whereas a portmanteau word is typically formed by combining two or more existing words that all relate to a singular concept which the portmanteau word is meant to describe, such as Spanish and English, into "spanglish".[original research?]

The word "portmanteau" was first used in this sense by Lewis Carroll in the book Through the Looking-Glass (1871),[4] in which Humpty Dumpty explains to Alice the coinage of the unusual words in Jabberwocky,[9] where "slithy" means "lithe and slimy" and "mimsy" is "flimsy and miserable". Humpty Dumpty explains the practice of combining words in various ways by telling Alice,

'You see it's like a portmanteau -- there are two meanings packed up into one word.'

In his introduction to The Hunting of the Snark, Carroll uses "portmanteau" when discussing lexical selection:

Humpty Dumpty's theory, of two meanings packed into one word like a portmanteau, seems to me the right explanation for all. For instance, take the two words "fuming" and "furious". Make up your mind that you will say both words, but leave it unsettled which you will say first ... if you have the rarest of gifts, a perfectly balanced mind, you will say "frumious".[9]

The word "portmanteau" itself was converted by Carroll to describe the concept. "Portmanteau" comes from French porter, to carry + manteau, cloak (from Old French mantel, from Latin mantellum).[10] In then-contemporary English, a portmanteau was a suitcase. In modern French, a portemanteau (or porte-manteaux) is a clothes valet, a coat-tree or similar article of furniture for hanging up jackets, hats, umbrellas and the like. 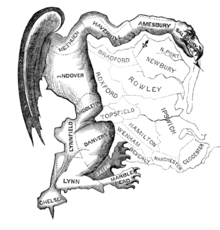 The original "Gerrymander" pictured in an 1812 cartoon. The word is a portmanteau of Massachusetts Governor Elbridge Gerry's name, with "salamander"

Many neologisms are examples of blends, but many blends have become part of the lexicon.[9] In Punch in 1896, the word brunch (breakfast + lunch) was introduced as a "portmanteau word".[11] In 1964, the newly independent African republic of Tanganyika and Zanzibar chose the portmanteau word Tanzania as its name.

"Wikipedia" is an example of a portmanteau; it combines the word "wiki" with the word "encyclopedia".

Portmanteau words may be produced by joining together proper nouns with common nouns, such as "gerrymandering", which refers to the scheme of Massachusetts Governor Elbridge Gerry for politically contrived redistricting; one of the districts created resembled a salamander in outline. Bardolatry, a portmanteau of "the bard" and "idolatry," means excessive worship of William Shakespeare and his works.

Some city names are portmanteaux of the regions they straddle: Texarkana spreads across the Texas-Arkansas-Louisiana border, while Calexico and Mexicali are respectively the American and Mexican sides of a single conurbation. Kentuckiana, while generally used to specifically describe the Louisville metropolitan area, is also used (although a bit more lightly) to describe the entire stretch of the Ohio Valley in the adjoining states of Indiana and Kentucky. 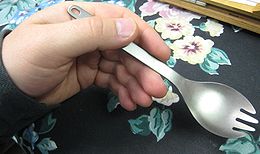 Many portmanteau words receive some use but do not appear in all dictionaries. For example, a spork is an eating utensil that is a combination of a spoon and fork. A skort is an item of clothing that is part skirt, part shorts. The Pegacorn or a Unipeg is a fantasy creature that combines Pegasus and unicorn to describe a winged unicorn. A real creature that is a crossbred lion and tiger is called a liger or a tiglon. In 2009, the term jeggings was coined to describe a pair of pants with the appearance of denim jeans, but the stretchiness of leggings. Portmanteaus are also commonly utilized in avant-garde scientific and literary theory; the word "stragmatics," for example, is increasingly employed in the context of posthuman factors research to address the strategic pragmatics of pragmatic strategies (i.e., strategies that are intrinsically realized by being arrived at by pragmatic means).

"Jeoportmanteau!" is a recurring category on the American television quiz show Jeopardy!. The category's name is itself a portmanteau of the words "Jeopardy" and "portmanteau". Responses in the category are portmanteaus constructed by fitting two words together. For example, the clue "Brett Favre or John Elway plus a knapsack" yielded the response "What is a 'quarterbackpack'?"[12][unreliable source?]

Blaxploitation is a film genre/style, whose name derives from a portmanteau of "black" and "exploitation", reflecting its main theme of social problems, along with the stereotypical depiction of Black people in film.

In the comic strip Li'l Abner, the central characters' surname, Yokum, is a portmanteau of the words yokel and hokum.

Turducken is a dish made by inserting a chicken into a duck, and thence into a turkey. In this way, the food reflects the portmanteau nature of the name. The word turducken was added to the Oxford English Dictionary in 2010 along with refudiate, coined by Sarah Palin from refute and repudiate.

In music fandom, the word stan, which came into use after rapper Eminem released a song with the same name, is a portmanteau of stalker and fan.

On the TV Show 30 Rock, Tina Fey created the word Snart which combines 'fart' and 'sneeze' and a snart is the action of a simultaneous occurrence. This appeared on the TV show 30 Rock in approximately February, 2011 on NBC

Comedian Tim Allen described an exceedingly deep belch could result in partially regurgitating as a vomit-burp, immediately calling it a "vurp"

Two proper names can also be used in creating a portmanteau word in reference to the partnership between people, especially in cases where both persons are well-known, or sometimes to produce epithets such as "Billary" (referring to former United States president Bill Clinton and his wife, United States Secretary of State Hillary Rodham Clinton). In this example of recent American political history, the purpose for blending is not so much to combine the meanings of the source words but "to suggest a resemblance of one named person to the other;" the effect is often derogatory, as linguist Benjamin Zimmer notes.[13] In contrast, the public and even the media use portmanteaux to refer to their favorite pairings as a way to "...giv[e] people an essence of who they are within the same name."[14] This is particularly seen in cases of fictional and real-life "supercouples." An early and well-known example, Bennifer, referred to film stars Ben Affleck and Jennifer Lopez. Other examples include Brangelina (Brad Pitt and Angelina Jolie) and TomKat (Tom Cruise and Katie Holmes). "Desilu Productions" was a Los Angeles, California-based company jointly owned by couple and actors Desi Arnaz and Lucille Ball. In double-barreled names, the hyphen is almost pushing one name away from the other.[14] Meshing says "I am you and you are me," notes one expert.[14] In 2009, John and Edward Grimes (twins) followed the growing trend for celebrity portmanteau names when they entered the sixth series of The X-Factor (UK) under the name "Jedward."

In 1927 the city of Wuhan, capital of the Hubei Province, was created by merging the three cities of Wuchang, Hankou, and Hanyang into one city.

Although portmanteau is a borrowing from French (modern spelling: portemanteau), it is not used in French in this sense. It is indeed a false friend. It literally means "coat carrier" and in Modern French refers to a coat stand or coat hook, but in the past it could also mean "suitcase". It was in this sense that it first came into English, and the metaphorical use for a linguistic phenomenon (putting one word inside another, as into a case) is an English coinage. The French linguistic term mot-valise, literally a "suitcase-word", is a relatively recent back-translation from English, attested only since 1970.

German Kofferwort is a recent literal translation of French mot-valise, attested since 1983. However the phenomenon is well known in German poetry. Heinrich Heine is believed to have coined over 60 portmanteaux.[15] Another example is Berlin's KaDeWe, a portmanteau of "Kaufhaus des Westens" (Shop of the West).

Modern Hebrew abounds with European mechanisms such as blending: Along with קומפקט דיסק (kompaktdisk, compact disc), Hebrew has the blend תקליטור (taklitor), which consists of the Hebrew-descent תקליט (taklít, record) and אור (or, light). Modern Hebrew is full of portmanteau blends, such as:

Common name like 'Mahesh' meaning lord of the earth, is composed of two words Maha (Great) + Ish (God), combined by the rules of Sanskrit sandhi. However unlike other languages, sandhi in Sanskrit follows strict grammar rules and is a well formed system from the very beginning of Sanskrit. There are many examples of borrowed word blends in Hindi. Another word common in both Hindi and English is Hinglish, which refers to the vernacular of the people in India, where they mix Hindi and English in the spoken language.

There is a tradition of linguistic purism in Icelandic, and neologisms are frequently created from pre-existing words. Tölva ("computer") is a portmanteau of tala ("digit; number") and völva ("oracle or seeress").[17]

Indonesian has many portmanteau words:

There are many examples of borrowed word blends in Japanese. The word パソコン (pasokon?), meaning PC, as in personal computer, is not officially an English loan word. The word does not exist in English; it is a uniquely Japanese contraction of the English personal computer (パーソナル・コンピュータ, pāsonaru konpyūta?). Another example, Pokémon (ポケモン?), is a contracted form of the English words pocket (ポケット, poketto?) and monsters (モンスター, monsutā?).[19]

Sometimes Japanese and English words are blended together. One very famous example, karaoke (カラオケ, karaoke?), is the blend of the Japanese word for empty (空っぽ, karappo?) and the English word orchestra (オーケストラ, ōkesutora?).

In linguistics the term blend is used to refer to general combination of words, and the term portmanteau is reserved for the narrow sense of combining two or more morphemes in one morph. E.g. in the Latin word animalis the ending -is is a portmanteau morph because it is used for two morphemes: the singularity and the genitive case. In English two separate morphs are used (of an animal).

The term may also be extended to include contractions. Examples of such combinations include:

This usage has been referred to as "portmanteau morph."[5]

While in Portuguese, French and Spanish the use of the short forms is mandatory, German speakers may freely choose the form they use.