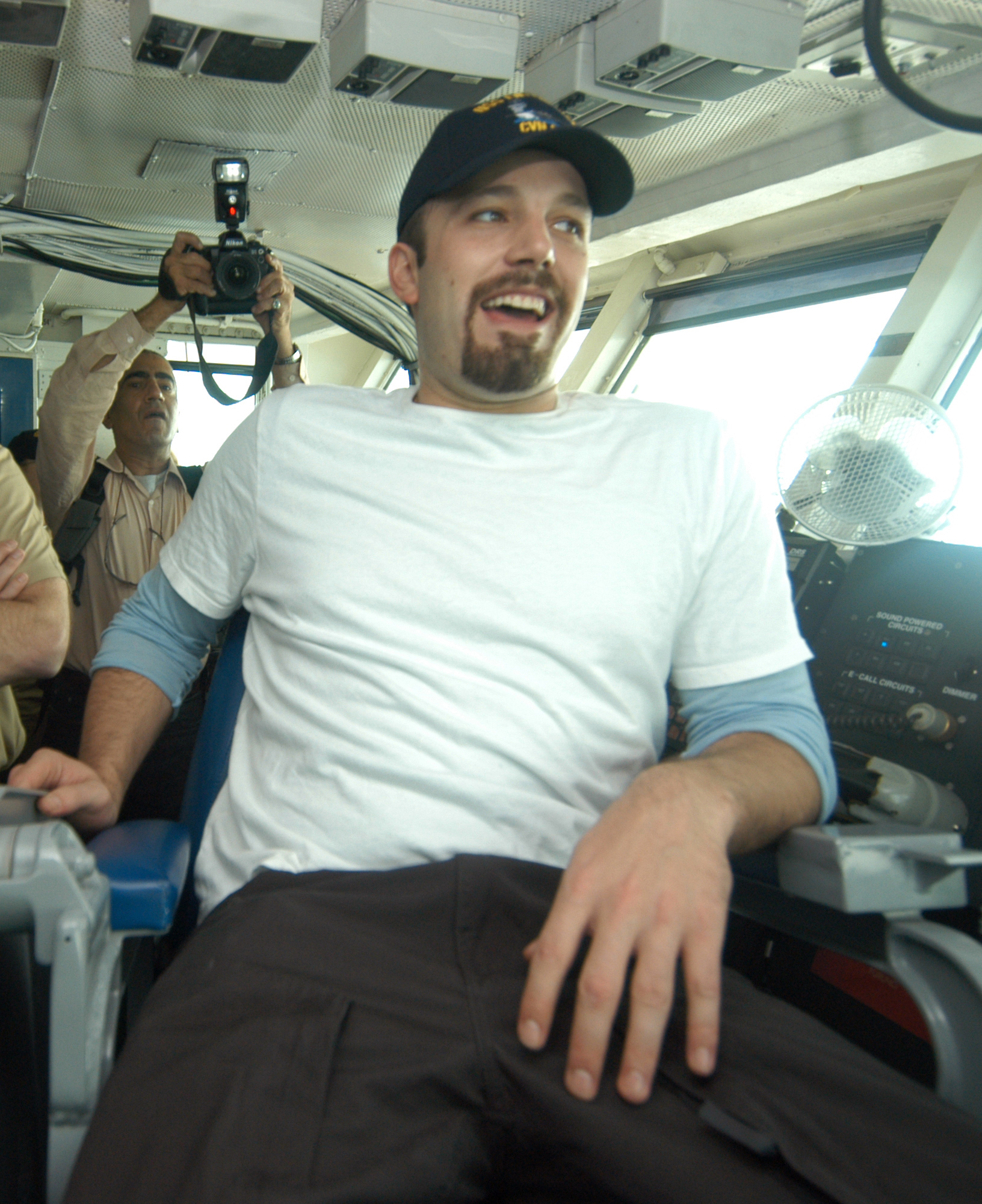 Ben Affleck (born Benjamin Géza Affleck-Boldt; [He is listed as "Benjamin G. Affleckbold"; born on August 15, 1972 in according to the . "California Birth Index, 1905–1995". Center for Health Statistics, California Department of Health Services, Sacramento, California. At Ancestry.com] August 15, 1972) is an American , director, actor, and older brother of . He became known in the mid 1990s, after his involvement in the film "", and has since become an Academy Award winner for his screenplay in "" in 1997. He has established himself as a leading man, having starred in several big budget films, such as "Armageddon", "Pearl Harbor", "", "The Sum of All Fears" and "Daredevil".

After high profile relationships with actress in 1998, his relationship with actress/singer attracted worldwide media attention in which Affleck and Lopez were dubbed as "Bennifer." Following their breakup in 2004, he began dating . The two married in June 2005 and welcomed their first child, Violet Anne Affleck, in December 2005. Affleck has been actively involved in politics, along with a organization called the A-T Children's Project. Along with childhood friend, , they founded the production company .

Affleck worked as a , appearing on the kids' series "" as well as in several movies.

Affleck had a one-line speaking role as a high school basketball player in the original "Buffy the Vampire Slayer" movie. He came to national attention working with childhood friend, Matt Damon, in "" in 1997, for which they shared credit and received the Oscar for Best Original Screenplay. Along with Damon and producers Chris Moore and Sean Bailey, Affleck founded the production company , through which the four created the documentary series "", as well as the failed mystery-hybrid series "" amongst other projects. [cite web |first=Malcolm |last=Johnson |url=http://www.in-forum.com/archive/purchases/?page=view&type=archive&id=369884 |title= Affleck, Damon: True friends in false world |accessdate=2008-06-09 |date=2002-06-18 |publisher=In-Forum] Project Greenlight was nominated for an Emmy for Outstanding Reality Program in 2002, 2004 and 2005. [cite web |publisher=Tiscali.ca |title=Matt Damon biography |url=http://www.tiscali.co.uk/entertainment/film/biographies/matt_damon_biog.html |accessdate=2007-09-10] [cite web |first=Louise A. |last=Barile |url=http://www.people.com/people/article/0,,624578,00.html |title=Ben & Matt To Give Second 'Greenlight' |accessdate=2008-06-09 |date=2002-08-21 |work=People]

Following "Good Will Hunting", Affleck had starring roles in many successful films, including "Armageddon", "", "Pearl Harbor", "", "The Sum of All Fears" and "Daredevil", establishing himself as a Hollywood leading man throughout the early 2000s. After the release, however, of several critically panned box office flops, including "Gigli" and "", Affleck's career waned considerably. He did not appear in any films until 2006 when he appeared in "". [cite video |year=2006 |title=Clerks II |medium=DVD |publisher=Paramount Pictures] In addition to being a fan of the Daredevil comics (Frank Miller's run specifically), [cite web |url=http://www.cnn.com/2003/SHOWBIZ/Movies/02/17/wkd.ben.affleck.ap/ |title=Ben Affleck on movies and marriage |accessdate=2008-06-13 |date=2003-02-17 |publisher= |work=AP] he wrote the introduction to the trade paperback "" which reprints "Daredevil" (Volume 2) #1 – 8 (written by Kevin Smith). [cite web |url=http://catalog.freelibrary.org/web2/tramp2.exe/do_ccl_search/guest?SETTING_KEY=English&servers=1home&index=ln&query=ocm63159363 |title=FLP - Catalog Record: Daredevil: Guardian Devil |accessdate=2008-06-13 |publisher=Free Library]

Affleck made what could be considered a comeback with the September 2006 release of the critically acclaimed noir "", directed by TV-series veteran Allen Coulter. His performance was impressive enough that he was awarded the Volpi Cup for Best Actor at the and won the Supporting Actor of the Year award at the Hollywood Film Festival, [cite news
url=http://www.variety.com/article/VR1117951216.html?categoryid=13&cs=1&nid=2564 |title=H'wood fest lauds Affleck |publisher=Variety |date=October 3, 2006 |author=Dave McNary |accessdate=2007-09-23] and was nominated for a for Best Performance by an Actor in a Supporting Role in a Motion Picture. [cite web |url=http://www.goldenglobes.org/browse/member/28400 |title=HFPA - Awards Search |accessdate=2008-06-10 |publisher=Golden Globes] Affleck made his directorial debut, which starred brother Casey, with ",", for which he also co-wrote the screenplay, about two Boston area detectives investigating a little girl's kidnapping and how it affects their lives. [cite news |title=Ben Affleck Makes Directorial Debut with 'Gone Baby Gone'. |url=http://www.voanews.com/english/archive/2007-10/2007-10-22-voa22.cfm?CFID=50066801&CFTOKEN=15464722 |publisher= |date=October 22, 2007 |accessdate=2007-09-25 ] Based on the book by Dennis Lehane, it opened to rave reviews in October 2007.

Affleck had a high-profile romance with actress in 1998, following her breakup with actor .

Affleck got his first tattoo when he was sixteen. He now has about a half-dozen including a tattoo of a dolphin that was used to cover up a tattoo of his high school sweetheart's name. The tattoos have been done by numerous artists including . [cite web |url=http://www.kidzworld.com/article/2004-tattoo-arists-whove-inked-celebrities |title="Tattoo Artists who've inked celebrities" |accessdate=2008-06-13 |date=2004-01-01 |publisher=Kidz World] He quit smoking after starring in the 2007 film "", in which he was required to smoke heavily, and lost his taste for it after a week of chain-smoking for his role. [ [http://atpictures.com/news.php?id=1924 "Smokin' Aces convinces Affleck to quit cigarettes."] AT Pictures.com.]

Affleck's support of the organization, the A-T Children's Project,

In the final weeks of the 2000 Presidential campaign, Affleck promoted the Democratic ticket, supporting and repeatedly delivering a get-out-the-vote plea: "It's very important to vote. The president will appoint three or four Supreme Court justices."

On October 28, 2000, Affleck flew with , who was running for a Senate seat, to , where he introduced her at a rally. He told the college crowd that Clinton had been advocating for women and working families since " was running around the frat house in his underwear". Lazio, then a congressman, was Clinton's Republican opponent. [cite web |first=J.D. |last=Heyman |url=http://www.rollingstone.com/artists/benaffleck/articles/story/5931795/the_bachelor |title=The Bachelor: Ben Affleck |accessdate=2008-06-09 |date=2001-06-15 |work=]

On November 6, 2000, the final day of the campaign, he was one of several high-profile celebrities summoned to Miami Beach by Films boss for a late-night Gore rally, just hours before polls opened nationwide. The Gore campaign's last event, a final effort to energize voters, did not end until about 1:00 a.m., but Affleck flew back to New York that morning and made a surprise live appearance on "". It was 10:15 a.m. when he made his final public pitch from a studio, noting that he was "a little bit tired... I've been out getting involved, doing stuff and trying to get people to vote. And that's why I came by here". Also, "Today is the get-out-the-vote day and...I think this is the time to get involved, especially the young folks who are here ... I'm about to go vote," He then said, "I am personally gonna vote for Al Gore". [cite web |url=http://www.imdb.com/news/ni0073253/|title=Get-out-the-vote |title=Actor Didn't Get Out To Vote, Says Web Site |accessdate=2008-06-09 |date=2001-05-01 |publisher=IMDB.com Studio Briefing]

As votes were tallied that night, Affleck told 's Amy Reiter, "I'm nervous this evening, but one of the things that's exciting to me is the number of people who voted. No matter who wins, I think it's a healthy thing for our country that so many voters have come out and participated in the process. Either way, I think the most important number will be the turnout". , however, later discovered that he had not voted that day.

In the May 2001 issue of "", Affleck said, "My fantasy is that someday I'm independently wealthy enough that I'm not beholden to anybody, so I can run for Congress on the grounds that everyday people should be in government". [cite web |url=http://www.imdb.com/news/ni0065169/ |title=Ben Affleck Wants Political Post |accessdate=2008-06-09 |date=2001-04-16 |publisher=IMDB.com |work=Wenn.com]

In 2004, Affleck actively campaigned for Democratic presidential nominee . [cite web |first=Carl |last=Hulse |url=http://www.nytimes.com/2004/07/26/politics/trail/26TRAIL-BEN.html?ex=1248667200&en=a6d0f60585c09600&ei=5088&partner=rssnyt |title=Ben Affleck Plays Himself at Convention |accessdate=2008-06-09 |date=2004-07-26 |work=] During the first day of the , he was featured on "" with and . [cite web |first=Richard |last=Corliss |url=http://www.time.com/time/magazine/article/0,9171,993703-1,00.html |title=The Trial of Ben Affable |accessdate=2008-06-09 |date=2004-03-29 |work=Time] asked if he would consider running for office, and Affleck admitted to contemplating the proposition. Specific attention focused on whether he would run for Kerry's open Senate seat (as Affleck was from ). He noted that the line between politics and entertainment is becoming increasingly blurred, as political figures , and , both came from the entertainment business, although both were members of the Republican Party. During the campaign, Affleck remained diplomatic, saying, "I had the pleasure of and the honor of meeting the President of the United States at the . I found him to be a collegial, affable, kind guy." [cite web |url=http://www.usatoday.com/life/people/2004-02-16-affleck-daytona_x.htm |title=Ben Affleck cheered at Daytona 500 |accessdate=2008-06-09 |date=2004-02-16 |work=] He went on to say Bush "is a patriot and he's a man who believes in the country. He's trying to further an agenda he believes in. I happen to disagree with most of his policies, but I respect the man." [cite episode |series=The O'Reilly Factor |network=Fox News Channel |airdate=2004-07-27 |minutes=60 ]

He appeared in a print ad with his openly gay cousin, Jason, in support of . [Cite web |url=http://www.stayclose.org/campaign/celebrity.asp?id=2 |title=Ben Affleck & his cousin Jason |publisher=stayclose.org |accessdate=2007-09-22] Though usually associated with the Democratic Party, Affleck dissents with the party line on regulation of and does not support increased . [cite web |first=Hanna |last=Rosin |url=http://www.washingtonpost.com/wp-dyn/articles/A19580-2004Jul27.html |title=From Beantown to Bentown |accessdate=2008-06-09 |date=2004-07-28 |work=Washington Post]

On June 23, 2008, he appeared in an ABC News exclusive exploring the humanitarian crisis in Congo. Affleck travelled to Congo and interviewed refugees, warlords, and members of parliament. "I think the more painful something is, the more you want to distance yourself from it," Affleck said. "I think the hard part is actually to let some of that go and to realize that when you see some of these images of people suffering in some way or another, to kind of remember that these are people who are in fact just in different circumstance than you are, but that are kind of dealing with [those circumstances] in a pretty brave and enduring way." [cite web |first=Katie |last=Escherich |url=http://abcnews.go.com/Nightline/Story?id=5214496&page=1 |title=Ben Affleck's Journey Through the Congo |accessdate=2008-06-30 |date=2008-06-23|work=ABC News]