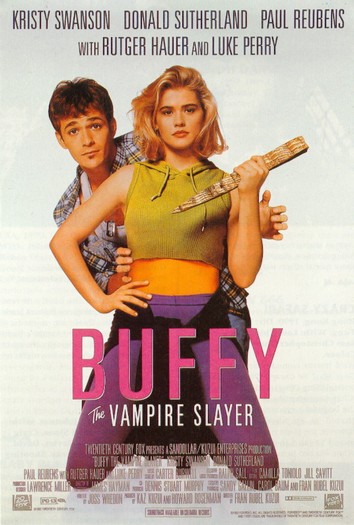 "Buffy the Vampire Slayer" is a 1992 action-comedy- about "" cheerleader Buffy () chosen by fate to fight and kill s. The movie is a light which plays on the clichés of typical s. It also led to the darker and much more popular TV series of the same name, which starred and was created and executive produced by screenwriter . Whedon often detailed how the TV series was a much closer rendering of his vision than the movie, which was compromised by commercial concerns and differences in interpretation. The film is now considered a relatively minor chapter in the broader "Buffy" legacy. When the film was first released, it was moderately successful [cite web|url=http://www.boxofficemojo.com/movies/?page=weekend&id=buffythevampireslayer.htm|title=Buffy the Vampire Slayer (1992) Weekend Box Office|work=Box Office Mojo|accessdate=2007-04-19] and received mixed reviews from critics. [cite web|url=http://www.rottentomatoes.com/m/buffy_the_vampire_slayer/|title=Buffy the Vampire Slayer (1992)|work=Rotten Tomatoes|accessdate=February 6|accessyear=2007]

Buffy () is a popular cheerleader at Hemery High School in Los Angeles when she is approached by a man named Merrick Jamison-Smythe (). He informs her that she is The Slayer - a young woman chosen to have uncommon strength and skills and a destiny to fight vampires. She admits that she has dreams of past Slayers and eventually accepts that she is one. She runs into Pike (), who is a basic loser who becomes the "damsel in distress", being rescued by Buffy many times, and her new love interest, despite her basketball player boyfriend.

After a brief training, she is drawn into conflict with a local vampire king called Lothos (), who has killed a number of past Slayers. Lothos kills Merrick. In a climactic battle set at the senior dance, Buffy defeats the vampire and his minions, primarily by being true to her own contemporary style and ignoring the conventions and limitations of previous Slayers. This is an early version of the allegory of female empowerment which would form the cornerstone of later versions of "Buffy".

* as Buffy
* as Merrick Jamison-Smythe
* as Amilyn
* as Lothos
* as Oliver Pike
* as Kimberly Hannah
* as Benny Jacks
* as Gary Murray
* as Cassandra
*Tom Jane as Zeph
* as Mrs. Summers
* (uncredited) as Basketball Player #10
* (uncredited) as Charlotte

Many of the details given in the film differ from the continuity of the later television series. For example, Buffy's history is dissimilar, and both vampires' and the Slayer's abilities are depicted differently. Joss Whedon has also expressed disapproval with the movie's interpretation of the script [ [http://www.cise.ufl.edu/cgi-bin/cgiwrap/hsiao/buffy/get-archive?date=19990117 Bronze VIP Archive - January 17, 1999 ] ] , stating

Additionally, Lothos plays on his violin the theme from the 2nd part of Schumann's "Piano Quintet Es-dur op. 44".