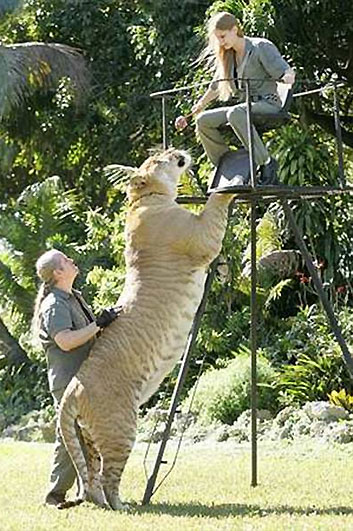 The liger, is a hybrid cross between a male and a female (i.e, "Panthera leo" × "Panthera tigris" [cite journal| author= |title= Tiggers Can't Climb Trees |journal=The London Magazine |volume=59 |issue=206 |date=December 1927] ). A liger resembles a tiger with diffused stripes. They are the largest cats in the world, although the is the largest "pure" . Ligers and tigers enjoy swimming, whereas lions do not. A similar hybrid, the offspring of a tiger and a lion is called a "".

Rare reports have been made of tigresses mating with lions in the wild. [cite book| title= The Tiger, Symbol of Freedom |editor= Nicholas Courtney, ed. |publisher=Quartet Books |location=London |year=1980 |id=ISBN 0704322455] Such mating may have occurred when, in uncommon circumstances, tigers were forced into ranges inhabited by the , "Panthera leo persica". However, since the present-day ranges of wild lions and tigers no longer overlap, [Valmik Thapar: "Im Land des Tigers." Vgs Verlagsges. (1998). ISBN 3802513703] it is generally held that such a combination of species would occur very rarely. [Ronald Tilson, director of conservation at the Minnesota Zoo]

Documentation of ligers dates to at least the early 19th century in Asia. A painting of two liger cubs was made by (1772−1844). In 1825, made an engraving of liger cubs born in 1824. The parents and their three liger offspring are also depicted with their trainer in a 19th Century painting in the naïve style.

Two liger cubs born in 1837, were exhibited to William IV and to his successor Victoria. On and on , wrote to zoologist with details and photographs of ligers born at the Hagenbeck's Tierpark in in 1897.

It has remained for one of the most enterprising collectors and naturalists of our time, Mr Carl Hagenbeck, not only to breed, but to bring successfully to a healthy maturity, specimens of this rare alliance between those two great and formidable felidae, the lion and tiger. The illustrations will indicate sufficiently how fortunate Mr Hagenbeck has been in his efforts to produce these hybrids. The oldest and biggest of the animals shown is a hybrid born on the 11th May, 1897. This fine beast, now more than five years old, equals and even excels in his proportions a well-grown lion, measuring as he does from nose tip to tail 10 ft 2 inches in length, and standing only three inches less than 4 ft at the shoulder. A good big lion will weigh about 400 lb [...] the hybrid in question, weighing as it does no less than 467 lb, is certainly the superior of the most well-grown lions, whether wild-bred or born in a menagerie. This animal shows faint striping and mottling, and, in its characteristics, exhibits strong traces of both its parents. It has a somewhat lion-like head, and the tail is more like that of a lion than of a tiger. On the other hand, it has no trace of mane. It is a huge and very powerful beast." [Bryden, A.H. (contributor). "Animal Life and the World of Nature" (1902-1903, bound partwork).]

In 1935, four ligers from two litters were reared in the Zoological Gardens of , . Three of them, a male and two females, were still living in 1953. The male weighed 750 lb. and stood a foot and a half taller than a full grown male lion at the shoulder.

Imprinted genes may be a factor contributing to liger size. [cite web | url= http://www.messybeast.com/genetics/growth-dysplasia.htm | title=Growth dysplasia in hybrid big cats | accessmonthday=June 23 | accessyear=2006] These are genes that may or may not be expressed on the parent they are inherited from, and that occasionally play a role in issues of hybrid growth. For example, in some dog breed crosses, genes that are expressed only when maternally-inherited cause the young to grow larger than is typical for either parent breed. This growth is not seen in the paternal breeds, as such genes are normally "counteracted" by genes inherited from the female of the appropriate breed. [cite web | url=http://www.hhmi.org/news/tilghman.html | title=HHMI News: Gene Tug-of-War Leads to Distinct Species | accessmonthday=June 23 | accessyear=2006 | author= | date=30 April, 2000]

The tiger produces a hormone that sets the fetal liger on a pattern of growth that does not end throughout its life. The hormonal hypothesis is that the cause of the male liger's growth is its sterility &mdash; essentially, the male liger remains in the pre-pubertal growth phase. Male ligers also have the same levels of testosterone on average as an adult male lion. In addition, female ligers also attain great size, weighing approximately 700 lb (320 kg) and reaching 10 feet (3.05 m) long on average, and are often fertile.

in is home to a liger named Hercules, the largest non-obese liger, said to weigh over 1,100 lbs, over twice the size of a male lion or a male tiger. Hercules was also featured on the Today Show, , , and in a article in 2005, when he was only 3 years old and already weighed Convert|408.25|kg|lb|0|lk=on|abbr=on at the time.Fact|date=February 2008 The liger is the largest animal in the cat family (feline family "Felidae"); [cite web| url= http://www.foundationtv.co.uk/brilliantcreatures/ser5/show4item3.html | title=FoundationTV:Biggest Cat In the World | accessmonthday=August 6 | accessyear=2006] [cite web| url= http://www.sierrasafarizoo.com/animals/liger.htm | title=Sierra Safari Zoo:Liger | accessmonthday=August 6 | accessyear=2006] and Hercules was in the Book of World Records as the largest cat. Hercules seems completely healthy and is expected to live a long life. The cat's breeding is said to have been a complete accident.Sinbad, another Liger, was shown on the National Geographic Channel. Sinbad was reported to have the exact weight of Hercules.

The fertility of hybrid big cat females is well-documented across a number of different hybrids. This is in accordance with : in hybrids of animals whose gender is determined by , if one gender is absent, rare or sterile, it is the heterogametic sex (the one with two different sex chromosomes e.g. X and Y).

According to "Wild Cats of the World" (1975) by , ligers and tigons were long thought to be sterile: In 1943, however, a fifteen-year-old hybrid between a lion and an 'Island' tiger was successfully mated with a lion at the Munich Hellabrunn Zoo. The female cub, although of delicate health, was raised to adulthood. [Guggisberg, C. A. W. "Wild Cats of the World" (1975).]

Ligers have a tiger-like striping pattern on a lion-like tawny background. In addition they may inherit rosettes from the lion parent (lion cubs are rosetted and some adults retain faint markings). These markings may be black, dark brown or sandy. The background color may be correspondingly tawny, sandy or golden. In common with tigers, their underparts are pale. The actual pattern and color depends on which subspecies the parents were and on the way in which the genes interact in the offspring.

have been crossed with lions to produce "white" (actually pale golden) ligers. In theory white tigers could be crossed with white lions to produce white, very pale or even stripeless ligers. A black liger would require both a tiger and a melanistic lion as parents. Very few melanistic tigers have ever been recorded, most being due to excessive markings (pseudo-melanism or ) rather than true melanism. No reports of black lions have ever been substantiated. A hypothetical procedure to breed black ligers is explained [http://en.wikipedia.org/wiki/Talk:Liger#Black_Liger here] . The blue or is now unlikely to exist, making gray or blue ligers an impossibility. It is not impossible for a liger to be white, but it is very rare.

According to the , accredited zoos frown on the practice of mixing two different species and have never bred ligers. Keeping the two species separate has always been standard procedure. [cite web | url=http://www.bigcatrescue.org/ligers.htm | title=BigCatRescue. Ligers. | accessmonthday=October 4 | accessyear=2006] However they have admitted that ligers have occurred by accident. Several AZA zoos are reported to have ligers.

*In the 2004 movie "", the title character draws a picture of a liger. Describing the hybrid felid as "pretty much my favorite animal," he asserts that the liger has been bred for "its skills in magic." However, the animal he draws resembles a more than a liger. Ligertown, a ramshackle roadside zoo near , where the film is set, once housed a menagerie of lion-tiger hybrids as well as lions, tigers and wolves. In 1995, some of the animals escaped, prompting an area-wide search-and-destroy mission for the animals.

*Several fictional mecha from the "" model and anime franchise are described as Liger types: most notably, the , , and . Ligers are nearly always the zoid used by the main characters in the series.

*Jimmy Graham, basketball player for the , was nicknamed "Liger" by Head Coach .

"This article incorporates text from [http://www.messybeast.com messybeast.com] , which is released under the ."