Felidae is the biological family of the cats; a member of this family is called a felid. Felids are the strictest carnivores of the thirteen terrestrial families in the order Carnivora, although the three families of marine mammals comprising the superfamily pinnipedia are as carnivorous as the felids. The most familiar felid is the domestic cat, which first became associated with humans about 10,000 years ago, but the family includes all other wild cats including the big cats.

The first felids emerged during the Oligocene, about 25 million years ago. In prehistoric times, there was a third subfamily known as Machairodontinae, which included the "saber-toothed cats" such as the well known Smilodon. There were also other superficially cat-like mammals, such as the marsupial sabertooth Thylacosmilus or the Nimravidae, which are not included in Felidae despite superficial similarities.

There are 41 known species of felids in the world today, which have all descended from the same ancestor.[1] This taxon originated in Asia and spread across continents by crossing land bridges. As reported in the journal Science, testing of mitochondrial and nuclear DNA by Warren Johnson and Stephen O'Brien of the U.S. National Cancer Institute demonstrated that ancient cats evolved into eight main lineages that diverged in the course of at least 10 migrations (in both directions) from continent to continent via the Bering land bridge and Isthmus of Panama, with the Panthera genus being the oldest and the Felis genus being the youngest. They estimated that 60 percent of the modern species of cats developed within the last million years.[3]

Most felids have a haploid number of 18 or 19. New World cats (those in Central and South America) have a haploid number of 18, possibly due to the combination of two smaller chromosomes into one larger chromosome.[4] Prior to this discovery, biologists had been largely unable to establish a family tree of cats from the fossil record because the fossils of different cat species all look very much alike, differing primarily in size.

The felids' closest relatives are thought to be the linsangs[5], and at one remove the group of civets, hyenas, mongooses, and Madagascar carnivores[6], with whom they share the Suborder Feliformia. All felid species share a genetic anomaly that prevents them from tasting sweetness.[7]

Felids are purely carnivorous animals, subsisting almost entirely on other vertebrates[citation needed]. Aside from the lion, wild felids are generally solitary; feral domestic cats do, however, form feral cat colonies. Cheetahs are also known to live and hunt in groups. Felids are generally secretive animals, are often nocturnal, and live in relatively inaccessible habitats. Around three-quarters of cat species live in forested terrain, and they are generally agile climbers. However, felids may be found in almost any environment, with some species being native to mountainous terrain or deserts.

Wild felids are native to every continent except Australasia and Antarctica.

Skull of the machairodontine Smilodon (Reconstruction) 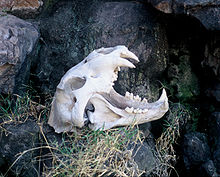 Felids tend to have lithe and flexible bodies with muscular limbs. In the great majority of species, the tail is between a third and a half the length of the body, although there are some exceptions (for example, the bobcat and margay). The limbs are digitigrade with soft toe pads and retractable claws. Compared with most other mammals, the head of cats is highly domed with a short muzzle. The skull possesses wide zygomatic arches and a large sagittal crest, both of which allow for the attachment of strong jaw muscles.[8]

The fur of felids takes many different forms, being much thicker in those species that live in cold environments, such as the Snow Leopard. The color of felids is also highly variable—although brown to golden fur is common in most species—usually marked with distinctive spots, stripes, or rosettes. The only felids to lack significant markings are the lion, puma, caracal and jaguarundi. Many species exhibit melanism, in which some individuals have an all-black coat.[8] All felids have a "tear stripe", a black stripe running from the corner of each eye down the side of the muzzle.[10]

All felids have retractable claws, although in a few species, such as the cheetah, the claws remain visible even when retracted. The claws are retracted when the animal is relaxed. They are attached to the terminal bone of the toe with a tough ligament; when the animal contracts muscles in the toe to straighten it, the ligament forces the claw outwards.[8] Cats have five toes on their forefeet and four on their hindfeet, reflecting their reliance on gripping and holding down their prey with their claws.[citation needed]

Felids have relatively large eyes, situated to provide binocular vision. Their night vision is especially good, due to the presence of a tapetum lucidum, which reflects light back inside the eyeball, and gives felid eyes their distinctive shine. As a result, the eyes of felids are approximately six times more light sensitive than those of humans, and many species are at least partially nocturnal. The retina of felids also contains a relatively high proportion of rod cells, adapted for seeing in conditions of dim light, but they also possess cone cells for sensing color during the day. However, felids appear to have relatively poor color vision in comparison with humans.[8]

The external ears of felids are also large, and especially sensitive to high-frequency sounds in the smaller cats. This sensitivity allows them to locate small rodent prey; cats themselves do not apparently produce such sounds.[8]

Felids also have a highly developed sense of smell, although not to the degree seen in canids; this is further supplemented by the presence of a vomeronasal organ in the roof of the mouth, allowing the animal to "taste" the air. The use of this organ is associated with the Flehmen response, in which the upper lip is curled upwards.

Felids possess highly sensitive whiskers set deep within the skin, which provide the cat with sensory information about the slightest air movement around it. For this reason, whiskers are very helpful to nocturnal hunters.

Most felids are able to land on their feet after a fall, an ability which relies on vision and the sense of balance acting together.

Felids have a relatively small number of teeth compared with other carnivorans, a feature associated with their short muzzles. With a few exceptions, such as the lynx, they have the dental formula:

. The canine teeth are large, reaching exceptional size in the extinct saber-tooth species. The upper third premolar and lower molar are adapted as carnassial teeth, suited to tearing and cutting flesh.[8]

The jaws of felids can only move vertically. This prevents them from being able to chew, but makes it easier for their powerful masseter jaw muscles to hold struggling prey.

All felids share a broadly similar set of vocalisations, although there is some variation between species. In particular, the pitch of calls varies, with larger species producing deeper sounds; overall, the frequency of felid calls ranges between 50–10,000 hertz.

All felids are able to spit, hiss, growl, snarl, and mew. The first four of these sounds are all used in an aggressive context. The spitting sound is a sudden burst, typically used when making threats, especially towards other species (such as humans). The hiss is a prolonged, atonal sound used in close range to other members of the species, when the animal is uncertain whether to attack or retreat. Growling is used to indicate a willingness to attack, while the higher pitched snarl is used when adopting a defensive posture.

The mewing sound may be used either as a close-contact call, typically between a mother and kittens, or as a louder, longer distance call, primarily during the mating season. There is some variation in the acoustic properties of the mew between different felid species; extreme examples include the whistling sound made by cougars and the mew-grunt of lions and tigers.

Most felids seem to be able to purr, vibrating the muscles in their larynx to produce a distinctive buzzing sound. In the wild, purring is used while a mother is caring for kittens. Precisely which species of felid are able to purr is a matter of debate, but the sound has been recorded in most of the smaller species, as well as the cheetah and cougar, and may also be found in the big cats.

Other common felid vocalisations include the gurgle, wah-wah, prusten, and roar. The first two sounds are found only among the Felinae (small cats). Gurgling is a quiet sound used during meetings between friendly individuals, as well as during courtship and when nursing kittens. The wah-wah is a short, deep-sounding call used in close contact, and is not found in all species (it is, for example, absent in the domestic cat).

In contrast, prusten and roaring are found only in big cats. Prusten is a short, soft, snorting sound reported in tigers, jaguars, snow leopards, and clouded leopards; it is used during contact between friendly individuals. The roar is an especially loud call with a distinctive pattern that depends on the species. Tigers and jaguars have a very snarly roar, while the roar of leopards and lions is much more throaty.[citation needed] Only lions, leopards, tigers and jaguars are truly able to roar, although the loudest mews of snow leopards have a similar, if less structured, sound.[8]

Traditionally, five subfamilies have been distinguished within family Felidae based on phenotypical features: the Felinae; the Pantherinae; the Acinonychinae (Cheetahs); the extinct Machairodontinae; and the extinct Proailurinae.[2]

Genetic research has provided a basis for a more concise classification for the living members of the cat family based on genotypical groupings.[1][11][12] Specifically, eight genetic lineages have been identified:[13] 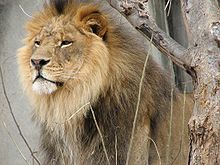 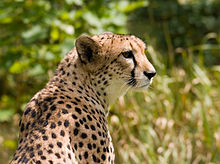 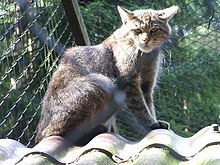 The following is the complete list of genera within family Felidae grouped according to the traditional phenotypical classification with the corresponding genotypical lineages indicated:

The American Lion was one of the abundant Pleistocene megafauna, a wide variety of very large mammals who went extinct about 10,000 years ago.[15]

The probably oldest known true felid (Proailurus) lived in the late Oligocene and early Miocene epochs. During the Miocene it gave way to Pseudaelurus. Pseudaelurus is believed to be the latest common ancestor of the two extant subfamilies and the extinct subfamily, Machairodontinae. This group, better known as the saber-tooth cats, became extinct in the Late Pleistocene era. The group includes the genera Smilodon, Machairodus and Homotherium. The Metailurini were originally classified as a distinct tribe within the Machairodontinae, though they count as members of the Felinae in recent times.[16][17] Most extinct cat-like animals, once regarded as members of the Felidae, later turned out to be members of related, but distinct, families: the "false sabretooths" Nimravidae and Barbourofelidae. As a result, sabretooth "cats" seem to belong to four different lineages. The total number of fossil felids that are known to science is low compared to other carnivoran families such as dogs and bears. Felidae radiated quite recently and most of the extant species are relatively young.

Genera of the Felidae

The list follows McKenna and Bells Classification of Mammals for prehistoric genera (1997)[2] and Wozencraft (2005) in Wilson and Reeders Mammal Species of the World for extant genera.[1] Pseudaelurus is included here in the Felinae according to McKenna & Bell despite its basal position in felid evolution. Inconsistent with McKenna and Bell, three additional prehistoric genera, Miracinonyx, Lokontailurus and Xenosmilus are listed. Sivapanthera is included into the Felinae (not Acinonychinae) and Ischrosmilus is included in the genus Smilodon. 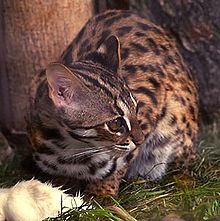 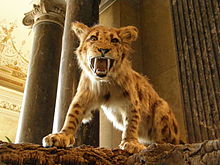