The South American Coati, or Ring-tailed Coati (Nasua nasua), is a species of coati from South America. In Brazilian Portuguese it is known as quati. It is native to Argentina, Bolivia, Brazil, Colombia, Ecuador, Guyana, Paraguay, Peru, Surinam, Uruguay and Venezuela.[3] It is the southern replacement of its very similar cousin, the White-nosed Coati. Weight in this species is 3.4–6 kg (7.5-13.2 lbs) and total length is about 1 m (3.3 ft), half of that being its tail.[4][5]

South American Coatis are diurnal animals, and they live both on the ground and in trees.[6] They typically live in the forest.[7] They are omnivorous and primarily eat fruit, invertebrates, other small animals and bird's eggs.[6] Coatis search for fruit in trees high in the canopy, and use their snouts to poke through crevices to find animal prey on the ground.[6] They also search for animal prey by turning over rocks on the ground or ripping open logs with their claws.[6]

Females generally live in large groups, called bands, consisting of 15 to 30 animals.[6][7] Males, on the other hand, are usually solitary.[7] Solitary males were originally considered a separate species due to the different social habits and were called "coatimundis",[7] a term still sometimes used today. Neither bands of females nor solitary males defend a unique territory, and territories therefore overlap.[7]

Group members produce soft whining sounds, but alarm calls are different, consisting of loud woofs and clicks.[6] When an alarm call is sounded, the coatis typically climb trees, and then drop down to the ground and disperse.[6] Coatis typically sleep in the trees.[6] Predators of the South American Coati include foxes, jaguars, jaguarundis, domestic dogs, and people.[8]

All females in a group come into heat simultaneously when fruit is in season.[7] Females mate with multiple males.[7] Gestation period is 77 days.[7] Females give birth to 2-4 young at a time, which are raised in a nest in the trees for 4–6 weeks.[6][7] Females leave the group during this time.[6][7] Females tend to remain with the group they were born in but males generally disperse from their mothers' group after 3 years.[7] 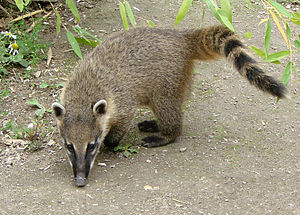 South American Coatis generally live for up to 7 years in the wild, but can live up to 14 years in captivity.[7]