The Yellow-throated Marten (Martes flavigula), also known as the Kharza, is an Asian species of marten which is listed by the IUCN as Least Concern due to its wide distribution, evidently relatively stable population, occurrence in a number of protected areas, and lack of major threats.[1] The yellow-throated marten is the largest marten in the Old World, with a tail more than half its body length. Its fur is brightly coloured, consisting of a unique blend of black, white, golden-yellow and brown.[2] It is an omnivore, whose sources of food range from fruit and nectar[3] to small deer.[4][5] The yellow-throated marten is a fearless animal with no natural predators, because of its powerful build,[6] its bright colouration and unpleasant odour. It shows little fear of humans or dogs, and is easily tamed.[7]

Although similar in several respects to the smaller beech marten, it is sharply differentiated from other martens by its unique color and the structure of its baculum. It is probably the most ancient form of marten, having likely originated during the Pliocene, as indicated by its geographical distribution and its atypical colouration.[8]

The first written description of the yellow-throated marten in the Western World is given by Thomas Pennant in his History of Quadrupeds (1781), in which he named it "White-cheeked Weasel". Pieter Boddaert featured it in his Elenchus Animalium with the name Mustela flavigula. For a long period after the Elenchus' publication, the existence of the yellow-throated marten was considered doubtful by many zoologists, until a skin was presented to the Museum of the East India Company in 1824 by Thomas Hardwicke.[9] 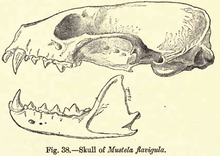 Skull, as illustrated in Blanford's The Fauna of British India

The yellow-throated marten is a large, robust, muscular and flexible animal with an elongated thorax, a small pointed head, a long neck and a very long tail which constitutes about 2/3 of its body length. The tail is not as bushy as that of other martens, and thus seems longer than it actually is. The limbs are relatively short and strong, with broad feet.[2] The ears are large and broad, but short with rounded tips. The soles of the feet are covered with coarse, flexible hairs, though the digital and footpads are naked and the paws are weakly furred.[10] The skull is similar to that of the beech marten, but is much larger. The baculum is S-shaped, with four blunt processes occurring on the tip. It is larger than other Old World martens ; males measure 500–719 mm in body length, while females measure 500–620 mm. Males weigh 2.5-5.7 kg (5.5-12.6 lbs), while females weigh 1.6-3.8 kg (3.5-8.4 lbs).[11] The anal glands sport two unusual protuberances, which can be used to secrete a strong smelling liquid for defensive purposes.[7]

The yellow-throated marten has relatively short fur which lacks the fluffiness of the pine marten, sable and beech marten. The winter fur differs from that of other martens by its relative shortness, its harshness and its lustre. It is also not as dense, fluffy and compact as that of other martens. The hairs on the tail are short and of equal length over the whole tail. The summer fur is shorter, sparser, less compact and lustrous. The colour of the pelage is unique among martens, being bright and variegated. The top of the head is blackish brown with shiny brown highlights, while the cheeks are somewhat more reddish, with a mixture of white hair tips. The back of the ears are black, while he inner portions are covered with yellowish-grey. The fur is a shiny brownish-yellow colour with a golden tone from the occiput along the surface of the back. The colour becomes browner on the hind quarters. The flanks and belly are bright yellowish in tone. The chest and lower part of the throat are a brighter, orange-golden colour than the back and belly. The chin and lower lips are pure white. The front paws and lower forelimbs are pure black, while the upper parts of the limbs are the same colour as the front of the back. The tail is of a shiny pure black colour, though the tip has a light, violet wash. The base of the tail is greyish-brown.[10] The contrasting marks of the head and throat are likely recognition marks.[7]

The yellow-throated marten holds extensive, but not permanent, home-ranges. It actively patrols its territory, having been known to cover over 10–20 km in a single day and night. It primarily hunts on the ground, but can climb trees proficiciently, being capable of making jumps up to 8–9 metres in distance between branches. After March snowfalls, the yellow-throated marten restricts its activities up treetops.[12] Estrus occurs twice a year, from mid-February to late-March and from late-June to early-August. During these periods, the males fight each other for access to females. Litters typically consist of 2-3 kits and rarely four.[6]

The yellow-throated marten is a diurnal hunter, which usually hunts in pairs, but may also hunt in packs of three or more. It preys on rats, mice, hares, snakes, lizards, eggs and ground nesting birds such as pheasants and francolins. It is reported to kill cats and poultry. It has been known to feed on human corpses, and was once thought to be able to attack an unarmed man in groups of 3-4.[3] The yellow-throated marten may prey on small ungulates.[4] In the Himalayas and Burma, it is reported to frequently kill muntjac fawns,[3] while in Ussuriland the base of its diet consists of musk deer, particularly in winter. The young of larger ungulate species are also taken, but within a weight range of 10–12 kg. In winter, the yellow-throated marten hunts musk deer by driving them onto ice. Two or three yellow-throated martens can consume a musk deer carcass in 2–3 days. Other ungulate species preyed upon by the yellow-throated marten include young wapiti, spotted deer, roe deer and goral.[4][5] Wild boar piglets are also taken on occasion.[5] It may prey on panda cubs[13] and smaller marten species, such as sables.[4] In areas where it is sympatric with tigers, the yellow throated marten may trail them and feed on their kills.[5] Like other martens, it supplements its diet with nectar and fruit,[3] and is therefore considered to be an important seed disperser.[14]

The species occurs in sub-tropical and tropical forests from the Himalayas to eastern Russia, south to the Malay Peninsula and Sunda Shelf (Borneo, Sumatra, and Java) to Taiwan. The yellow-throated marten has been reported in the northeast Indian states of Arunachal Pradesh, Manipur and Assam and in Burma. It occurs in central and northeastern China and the Korean Peninsula. The yellow-throated marten is well distributed, but uncommon throughout mainland Malaya. It also occurs in the central mountain range and the southern areas of Taiwan.[20]