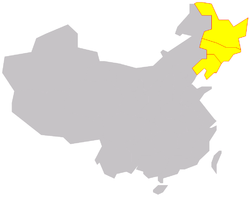 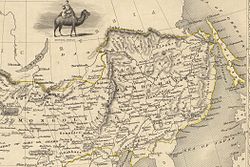 One of the earliest European maps using the term "Manchuria" (Mandchouria) (John Tallis, 1851). Previously, the term "Chinese Tartary" had been commonly applied in the West to Manchuria and Mongolia[1]

Manchuria is a historical name given to a large geographic region in northeast Asia. Depending on the definition of its extent, Manchuria usually[2][3] falls entirely within the People's Republic of China, or is sometimes divided between China and Russia. The region is commonly referred to as Northeast China (simplified Chinese: 东北; traditional Chinese: 東北; pinyin: Dōngběi). This region is the traditional homeland of the Xianbei, Khitan, and Jurchen peoples, who built several dynasties in northern China. The region is also the home of the Manchus, after whom Manchuria is named.

Manchuria can refer to any one of several regions of various size. These are, from smallest to largest:

"Manchuria" is a translation of the Manchu word Manju (Chinese language: Mǎnzhōu). According to the Manchu Veritable Records, the name Manju was originally given by the legendary dynastic founder Bukūri Yongšon to the country he established when he united the three warring clans of Odoli, at the location of the modern city of Dunhua in Jilin province. This name was used in Chinese documents until the early 20th century, when Manchuria was converted into three provinces by the late Qing government. Since then, the "Three Eastern Provinces" (東三省) was officially used by the Qing government in China to refer to this region, and the post of Viceroy of Three Northeast Provinces (東三省總督) was established to take charge of these provinces. After the 1911 revolution, which resulted in the collapse of the Manchu-established Qing Dynasty, the name of the region where the Manchus originated was known as the Northeast in official documents in the newly-founded Republic of China, in addition to the "Three Northeast Provinces".

In current Chinese parlance, an inhabitant of "the Northeast", or Northeast China, is a "Northeasterner" (Dōngběi rén). "The Northeast" is a term that expresses the entire region, encompassing its history, culture, traditions, dialects, cuisines and so forth, as well as the "Three East Provinces" or "Three Northeast Provinces" (東三省 or 東北三省), which replaced the concept of "Manchuria" in the early 20th century. Though geographically also located in the northeastern part of China, other provinces such as Hebei are not considered to be a part of "the Northeast". After the Second Sino-Japanese War, the People's Republic of China has refused recognition[vague] of the name Mǎnzhōu (Manchuria), only using "the Northeast" for the region to avoid acknowledging the Japanese imperial legacy in the area;[4] the title of Manchuria is still often associated in China with the Japanese puppet state of Manchukuo.[5]

Manchuria has historically also been referred to as Guandong (traditional Chinese: 關東; simplified Chinese: 关东; pinyin: Guāndōng), which literally means "east of the pass", a reference to Shanhai Pass in Qinhuangdao in today's Hebei province, at the eastern end of the Great Wall of China. This usage is seen in the expression Chuǎng Guāndōng (literally "Rushing into Guandong") referring to the mass migration of Han Chinese to Manchuria in the 19th and 20th centuries. An alternate name, Guanwai (關外; 关外; Guānwài; "outside of the pass"), was also used for the region. The name Guandong later came to be used more narrowly for the area of the Kwantung Leased Territory on the Liaodong Peninsula.

Although no part of Manchuria was glaciated during the Quaternary, the surface geology of most of the lower-lying and more fertile parts of the region consists of very deep layers of loess, which have been formed by the wind-born movement of dust and till particles formed in glaciated parts of the Himalayas, Kunlun Shan and Tien Shan, as well as the Gobi and Taklamakan Deserts.[7] Soils are mostly fertile Mollisols and Fluvents, except in the more mountainous parts where they are poorly developed Orthents, as well as the extreme north where permafrost occurs and Orthels dominate.[8]

The climate of Manchuria has extreme seasonal contrasts, ranging from humid, almost tropical heat in the summer to windy, dry, Arctic cold in the winter. This occurs because the position of Manchuria is on the boundary between the great Eurasian continental landmass and the huge Pacific Ocean causes complete monsoonal wind reversal.

In the summer, when the land heats up faster than the ocean, low pressure forms over Asia and warm, moist south to southeasterly winds bring heavy, thundery rain, yielding annual rainfall ranging from 400 mm (16 in.), or less in the west, to over 1150 mm (45 in.) in the Changbai Mountains.[9] Temperatures in the summer are very warm to hot, with July average maxima ranging from 31°C (88°F) in the south to 24°C (75°F) in the extreme north.[10] Except in the far north near the Amur River, high humidity causes major discomfort at this time of year.

In the winter, however, the vast Siberian High causes very cold, north to northwesterly winds that bring temperatures as low as −5°C (23°F) in the extreme south and −30°C (−22°F) in the north,[11] where the zone of discontinuous permafrost reaches northern Heilongjiang. However, because the winds from Siberia are exceedingly dry, snow falls only on a few days every winter and it is never heavy. This explains why, whereas corresponding latitudes of North America were fully glaciated during glacial periods of the Quaternary, Manchuria, though even colder, always remained too dry to form glaciers[12] – a state of affairs enhanced by stronger westerly winds from the surface of the ice sheet in Europe.

Manchuria was the homeland of several nomadic tribes, including the Manchu, Ulchs and Hezhen. Various ethnic groups and their respective kingdoms, including the Sushen, Donghu, Xianbei, Wuhuan, Mohe, Khitan and Jurchens have risen to power in Manchuria. At various times in this time period, Han Dynasty, Cao Wei Dynasty, Western Jin Dynasty, Tang Dynasty and some other minor kingdoms of China established control in parts of Manchuria. Various kingdoms in Korea, such as Gojoseon, Buyeo, Goguryeo and Balhae were also established in parts of this area. With the Song Dynasty to the south, the Khitan people of Western Manchuria created the Liao Empire in the region, which went on to control adjacent parts of Northern China as well.

In the early 12th century the Tungusic Jurchen people, who were Liao's tributaries, overthrew the Liao and formed the Jin Dynasty (1115–1234), which went on to control parts of Northern China and Mongolia. During the Yuan Dynasty (1271–1368),[13] Manchuria was administered under the Liaoyang province. In 1375, Nahacu, a Mongol official of the Northern Yuan in Liaoyang province invaded Liaodong, but later surrendered to the Ming Dynasty in 1387. In order to protect the northern border areas the Ming decided to "pacify" the Jurchens in order to deal with its problems with Yuan remnants along its northern border. The Ming solidified control over Manchuria under Yongle Emperor (1402–1424). Starting in the 1580s, a Jianzhou Jurchen chieftain, Nurhaci (1558–1626), started to unify Jurchen tribes of the region. Over the next several decades, the Jurchen, took control over most of Manchuria. In 1616, Nurhaci founded the Later Jin Dynasty.

In 1644, after the Ming Dynasty's capital of Beijing was sacked by the peasant rebels, the Jurchens (now called Manchus) allied with Ming general Wu Sangui and seized control of Beijing, overthrowing the short-lived Shun Dynasty and establishing Qing Dynasty rule (1644–1912) over all of China. But in 1858, a weakening Qing Empire was forced to cede Manchuria north of the Amur to Russia under the Treaty of Aigun. In 1860, at the Treaty of Peking, the Russians managed to obtain a further large slice of Manchuria, east of the Ussuri River. As a result, Manchuria was divided into a Russian half known as "Outer Manchuria", and a remaining Chinese half known as "Inner Manchuria". In modern literature, "Manchuria" usually refers to Inner (Chinese) Manchuria. As a result of the Treaties of Aigun and Peking, China lost access to the Sea of Japan.

Inner Manchuria also came under strong Russian influence with the building of the Chinese Eastern Railway through Harbin to Vladivostok. In the Chuang Guandong movement, many Han farmers, mostly from the Shandong peninsula moved there. Japan replaced Russian influence in the southern half of Inner Manchuria as a result of the Russo-Japanese War in 1904–1905. Most of the southern branch of the Chinese Eastern Railway was transferred from Russia to Japan, and became the South Manchurian Railway. Japanese influence extended into Outer Manchuria in the wake of the Russian Revolution of 1917, but Outer Manchuria had reverted to Soviet control by 1925. Manchuria was an important region for its rich mineral and coal reserves, and its soil is perfect for soy and barley production. For pre–World War II Japan, Manchuria was an essential source of raw materials. Without occupying Manchuria, the Japanese probably could not have carried out their plan for conquest over Southeast Asia or taken the risk to attack Pearl Harbor on the 7th of December, 1941.[14]

Around the time of World War I, Zhang Zuolin established himself as a powerful warlord with influence over most of Manchuria. During his rule, the Manchurian economy grew tremendously, backed by immigration of Chinese from other parts of China. The Japanese assassinated him on June 2, 1928, in what is known as the Huanggutun Incident.[15] Following the Mukden Incident in 1931 and the subsequent Japanese invasion of Manchuria, the Japanese declared Inner Manchuria an "independent state", and appointed the deposed Qing emperor Puyi as puppet emperor of Manchukuo. Under Japanese control Manchuria was one of the most brutally run regions in the world, with a systematic campaign of terror and intimidation against the local Russian and Chinese populations including arrests, organised riots and other forms of subjugation.[16] Manchukuo was used as a base to invade the rest of China.

After the atomic bombing of Hiroshima, Japan in 1945, the Soviet Union invaded from Soviet Outer Manchuria as part of its declaration of war against Japan. Soon afterwards, the Chinese communists and nationalists started fighting for the control over Manchuria. The communists won in the Liaoshen Campaign and took complete control over Manchuria. With the encouragement of the Soviet Union, Manchuria was then used as a staging ground during the Chinese Civil War for the Communist Party of China, which emerged victorious in 1949. Ambiguities in the treaties that ceded Outer Manchuria to Russia led to dispute over the political status of several islands. This led to armed conflict in 1969, called the Sino-Soviet border conflict. In 2004, Russia agreed to transfer Yinlong (Tarabarov) Island and one half of Heixiazi (Bolshoy Ussuriysky) Island to the PRC, ending an enduring border dispute.

The traditional language of Manchuria was Manchu language. However, most Manchus now speak Mandarin Chinese and there are fewer than 70 native speakers of Manchu out of a total of nearly 10 million ethnic Manchus. However, the Xibe language, with 40,000 speakers remaining, is in almost every respect identical to Manchu, despite the fact that Xibe speakers, who live in far western region of Xinjiang, are ethnically distinct from Manchus.[17]