Northeast China, historically known in English as Manchuria, is a geographical region of China, consisting of the three provinces of Liaoning, Jilin and Heilongjiang. The region is sometimes called the Three Northeast Provinces (东北三省/東北三省; Dōngběi sānshěng).[1] It is separated from Russia largely by the Amur, Argun, and Ussuri rivers, from North Korea by the Yalu River and Tumen River, and from the Inner Mongolian Autonomous Region by the Greater Khingan Range. The heartland of the region is the Northeast China Plain. The part of Manchuria that is part of Russia is referred to as "Outer Manchuria".

In the context of the Northeast China Revitalization strategy of the State Council, five eastern prefectures of Inner Mongolia are also defined as part of the Northeast: Xilin Gol, Chifeng, Tongliao, Hinggan and Hulunbuir.[2] The region is nearly congruent with some definitions of "Manchuria" in historical foreign usage.[3]

Another term for the area is Guandong (关东/關東; Guāndōng) meaning "east of the gate," referring to the gate at Shanhaiguan. This name was also used by the Japanese to their leased territory of Dalian, as Kwantung Chou, and its Kwantung Army which was later mobilized to set up the puppet state of Manchukuo in Northeast China. 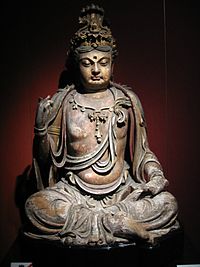 Northeast China was the homeland of several nomadic tribes, including the Manchus (or Jurchens), Ulchs, Hezhen (also known as the Goldi and Nanai). Various ethnic groups and their respective kingdoms, including the Sushen, Xianbei, and Mohe have risen to power in the Northeast. Many Korean kingdoms have also rose to power in Manchuria, including Gojoseon, Buyeo, Goguryeo, and Balhae. Yan State once occupied the Liaodong Peninsula, Han Chinese dynasties in China loosely controlled the southern parts of the region. During the Song dynasty, the Khitan set up the Liao Dynasty in Northeast China. Later, the Jurchen overthrew the Liao and formed the Jin Dynasty, which went on to conquer northern China. In AD 1234, the Jin Dynasty fell to the Mongols, whose Yuan Dynasty was later replaced by the Ming Dynasty in 1368. In 1644, the Manchu conquered the entirety of China and established the Qing dynasty (1644–1912).

Northeast China came under influence of the Russian Empire with the building of the Chinese eastern railway through Harbin to Vladivostok. The Empire of Japan replaced Russian influence in the region as a result of the Russo-Japanese War in 1904–1905, and Japan laid the South Manchurian Railway in 1906 to Port Arthur. During the Warlord Era in China, Zhang Zuolin established himself in Northeast China, but was murdered by the Japanese for being too independent. The last Qing dynasty emperor, Puyi, was then placed on the throne to lead a Japanese puppet state of Manchukuo. After the atomic bombing of Japan in 1945, the Soviet Union invaded the region as part of its declaration of war against Japan. From 1945 to 1948, Northeast China was a base area for the Communist People's Liberation Army in the Chinese Civil War. With the encouragement of the Soviet Union, the area was used as a staging ground during the Civil War for the Chinese Communists, who were victorious in 1949 and have been controlling this region since.

Manchus form the second significant ethnic group in the region. Other major ethnic groups include the Mongols, Koreans, and the Huis.

The Northeast was one of the earlier regions to industrialize in China. After the founding of the People's Republic of China, Northeast China continued to be a major industrial base of the country. Recent years, however, has seen the stagnation of Northeast China's heavy-industry-based economy, as China's economy continues to liberalize and privatize; the government has initialized the Revitalize the Northeast campaign to counter this problem.

The region is, on the whole, more heavily urbanised than most parts of China, largely because it was the first part of the country to develop heavy industry owing to its abundant coal reserves. Major cities include Shenyang, Dalian, Harbin and Changchun, all with several million inhabitants. Other cities include the steel making centres of Fushun and Anshan in Liaoning, Jilin City in Jilin, and Qiqihar and Mudanjiang in Heilongjiang. Harbin, more than any other city in China, possesses significant Russian influences: there are many Orthodox churches that have fallen out of use since the Cultural Revolution. Shenyang and Dalian, meanwhile, have sizable populations of Japanese and Koreans due to their traditional linkages.

The rural population of Manchuria is heavily concentrated in the warmer southern part of the area, where very warm to hot summer weather permits crops such as maize and millet to be grown with high yields. Soybeans and flax are also very important, as are wheat and barley. The region possesses large flocks of sheep, and pigs are abundant in the more densely settled southern part. The northern half of Heilongjiang is so cold and poorly drained that agriculture is almost impossible; however, the Amur River provides very rich fishing prospects, and sheep are even more abundant than in southern Heilongjiang.

Northeast China is the country’s traditional industrial base, focusing mainly on equipment manufacturing. Major industries include the steel, automobile, shipbuilding, aircraft manufacturing, and petroleum refining industries. The gross regional product of the three northeast provinces totaled ¥1.63 trillion in 2002. In recent years, the Chinese government has initialized the "Revitalize the Northeast campaign" to turn this region into one of China's economic growth engines.

Northeastern Mandarin retains elements from native Tungusic languages, Japanese, and Russian and there are enough differences to give the dialect its own distinctive characteristics. Ethnic Manchus speak Mandarin, and the Manchu language is almost extinct due to widespread assimilation to Han culture over the last four centuries. Mongols tend to be bilingual in their own languages Mongolian) as well as Mandarin. (See Northeastern Mandarin)

Northeastern Chinese cuisine reflects the region's ethnic diversity. Native Manchu, Northern Chinese, Russian and Japanese cooking styles all find their traces in Manchurian cooking. One of the distinguishing characteristics of the cuisine is the use of uncooked fresh vegetables. During the long winter season, pickled Chinese cabbage, Suan cai, is preserved and used for cooking. In almost every other region of China, vegetables are cooked thoroughly before being eaten.

In general, the culture of Northeast China takes its elements from the cultures of North China and Shandong, where most of the Han Chinese migration into Northeast China, known as Chuang Guandong (闯关东), originated, the native Tungusic peoples, and its own innovations.

Errenzhuan, Yangge, Jilin opera and Stilts are popular forms of traditional entertainment in Northeast China. "Northeastern Cradle Song" (东北摇篮曲) is an example of the folk songs of this region.

Because of its climatic conditions, Northeast China is the base for China's winter sports. Ice hockey and ice skating athletes often come from or were educated in Northeast China. 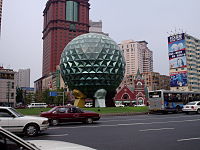