Changchun (Chinese: 长春; pinyin: Chángchūn) is the capital and largest city of Jilin province, located in the northeast of the People's Republic of China, in the center of the Songliao Plain. It is administered as a sub-provincial city with a population of 7,677,089 at the 2010 census under its jurisdiction, including counties and county-level cities. The name, which means "Long Spring", originated from the Jurchen language. The 6 urban districts of Changchun's city proper have a total population of 3,341,700 in 2010 which correspond to the built up area.

Changchun started as a minor trading town. In 1800, Emperor Jiaqing of the Qing Dynasty selected a small village on the east bank of the Yitong River and named it "Changchun Ting." In 1889, it was promoted as "Changchun Fu".

In May 1898, as Russians were building a railway from Harbin to Lüshun (the southern branch of the Chinese Eastern Railway), Changchun got its first railway station, located in Kuancheng.[1]

After Russia's loss of the southernmost section of this branch as a result of the Russo-Japanese War of 1904-1905, the Kuancheng station (Kuanchengtze, in contemporary spelling) became the last Russian station on this branch. The next station to the south - the new "Japanese" Changchun station, just a short distance to the south - became the first station of the South Manchuria Railway, which now owned all the tracks running farther south, to Lüshun, which they re-gauged to the standard gauge (after a short stint of using the narrow Japanese gauge during the war).[2]

Changchun expanded rapidly as the junction between of the Japanese-owned South Manchurian Railway and the Russian-owned Chinese Eastern Railway which continued to have different rail gauges, as well as permit licences until 1935. Changchun had railway repair shops, and branch lines originating in Changchun extended into Korea and Inner Mongolia.

An epidemic of pneumonic plague occurred in surrounding Manchuria from 1910 to 1911.[4] Later, the Japanese established Unit 100 to develop plague biological weapons.

In 1932 the capital of Manchukuo, a Japan-controlled puppet state in Manchuria, was moved to Changchun from Jilin City (Kirin city) (located within less than 200 km to the east). Then known as Hsinking (Chinese: 新京; pinyin: Xīnjīng; Wade–Giles: Hsin-ching; Japanese: Shinkyō; English trans.: New Capital), the capital was a well-planned city with broad avenues and modern public works. The city underwent rapid expansion in both its economy and infrastructure. Many of buildings built during the Japanese colonial era still stand today, including those of the Eight Major Bureaus of Manchukuo (Chinese: 八大部) as well as the Headquarters of the Japanese Kwantung Army (simplified Chinese: 关东军司令部; traditional Chinese: 關東軍司令部).

From 1931 to 1945 China's last emperor Pu Yi was installed as the Manchukuo government head by the Japanese authority. He resided in the Imperial Palace (Chinese: 帝宮) which is now the Museum of the Manchu State Imperial Palace (simplified Chinese: 伪满皇宫博物院; traditional Chinese: 僞滿皇宮博物院).

During the Second Sino-Japanese War (1937–1945) and World War II the Imperial Japanese Army implemented in Changchun the headquarters of Unit 100 ("Wakamatsu Unit"), under command of veterinarian Yujiro Wakamatsu. This facility dedicated itself to both the study of animal vaccines to protect Japanese resources, and, especially, veterinary biological-warfare. Diseases were tested for use against Soviet and Chinese horses and other livestock. In addition to these tests, Unit 100 ran a bacteria factory to produce the pathogens needed by other units. Biological sabotage testing was also handled at this facility: everything from poisons to chemical crop destruction.

Severely damaged during World War II, the city was taken by the Soviet Red Army in 1945. The Russians maintained a presence in the city during the Chinese civil war until 1946.

Kuomintang forces occupied the city in 1946, but were unable to hold the countryside against communist forces. The city fell to the communists in 1948 after a 5-month-long siege by the People's Liberation Army that resulted in a massive famine with a civilian death toll of 100,000 to 300,000. The facts of the siege are still subject to official censorship in PRC.[5]

Renamed Changchun by the People's Republic of China government, it became the capital of Jilin in 1954. The Changchun Film Studio is also one of the remaining film studios of the era.

From the 1950s, Changchun was designated to become a center for China's automotive industry. Construction of the First Automobile Works began in 1953 and production of the Jiefang CA-10 truck, based on the Soviet ZIS-150 started in 1956. In 1958, FAW introduced the famous Hongqi (Red Flag) limousines.

Changchun lies in the middle portion of the Northeast China Plain. The city is situated at a moderate elevation, ranging from 250 metres (820 ft) to 350 metres (1,150 ft) within its administrative region. In the eastern portion of the city, there lies a small area of low mountains.

Changchun has a four-season, monsoon-influenced, humid continental climate (Köppen Dwa). Winters are long (lasting from November to March), cold, and windy, but dry, due to the influence of the Siberian anticyclone, with a January mean temperature of −15.1 °C (4.8 °F). Spring and fall are somewhat short transitional periods, with some precipitation, but are usually dry and windy. Summers are hot and humid, with a prevailing southeasterly wind due to the East Asian monsoon; July averages 23.1 °C (73.6 °F). Snow is usually light during the winter, and annual rainfall is heavily concentrated from June to August. A typical year will see upwards of 2,600 hours of sunshine, and a frost-free period of 140 to 150 days.

The city’s leading industries are foodstuffs, photoelectronic information, biology and medicine, and automotive. Changchun is the largest automobile manufacturing base in China, producing 9% of the country's automobiles in 2009.[7] As cradle of the auto industry, and home to FAW, China’s biggest vehicle producer, one of Changchun’s better known nicknames is "China's Detroit".[8]

Changchun has great potential, but like many northern cities it still is trying to resolve major difficulties. It is increasingly faced with competition from nearby cities, seeing its dominance of the northeast as a regional industrial powerhouse diminish as other nearby cities continue to narrow the gap.[9]

FDI in the city remains small - only US$1.69 billion was used in 2007 - but is steadily increasing, showing a 20 percent rise from the previous year. However, investors still need to be convinced. Big players of the likes of Coca-Cola, may help with this. The company set up a bottling plant in the city’s ETDZ in 2004 with an investment of US$20 million.[9]

Changchun's main industry is the manufacturing of transportation facilities and machinery. It produces 50 percent of passenger trains, and 10 percent of tractors made in China.

Changchun is the biggest automobile research and development center in China. The first Chinese truck and car was made in Changchun. FAW (First Automotive Works) Group is based in Changchun. The automaker's factories and associated housing and services occupies a substantial portion of the city's southwest end. Specific brands produced in Changchun includes the Red Flag luxury brand, as well as joint ventures with Audi, Volkswagen, and Toyota.

Changchun's largest companies include FAW, one of China's leading domestic producers of cars, trucks and buses, Yatai Group, a major conglomerate involved in wide range of industries and Jilin Grain Group, a major processor of grains.[10]

Changchun High Technology Development Zone The zone is one of the first 27 state-level advanced technology development zones and is situated in the southern part of the city, covering a total area of 49 square kilometers. Within the zone, one can find 18 full-time universities and colleges, 39 state and provincial-level scientific research institutions, and 11 key national laboratories.[6] The zone is presently focusing on developing its five main industries, namely bio-engineering, automobile engineering, new material fabrication, photo-electricity, and information technology.[6]

Established in April 1993, the zone enjoys all the preferential policies stipulated for economic and technological development zones of coastal open cities.[9] The total area of CETDZ is 112.72 sqkm, of which 30 sqkm has been set aside for development and utilization.[11] It is located five kilometers from downtown Changchun, two kilometers from the freight railway station and 15 kilometers from the Changchun international airport. The zone is devoted to developing five leading industries, namely automotive parts and components, photoelectric information, bio-pharmaceutical, fine processing of foods, and new building materials. In particular, high-tech and high value added projects account for over 80 percent of total output. In 2006 the zone's total fixed assets investment rose to RMB38.4 billion. Among the total of 1656 enterprises registered are 179 that are foreign-funded. The zone also witnessed a total industrial output of RMB 277 billion in 2007.[9]

Founded in 1993, the Changchun Automotive Trade Center was re-established as the Changchun Automotive Economic Trade and Development Zone in 1996. The development zone is situated in the southwest of the city and is adjacent to the China First Automobile Works Group Corporation and the Changchun Film ThemeCity. It covers a total area of approximately 300,000 square meters. Within the development zone lies an exhibition center and five specially demarcated industrial centers. The famous Changchun Automobile Wholesale Center began operations in 1994 and is the largest auto-vehicle and spare parts wholesale center in China. The other centers include a resale center for used auto-vehicles, a specialized center for industrial/commercial vehicles, and a tire wholesale center.[9]

Changchun is developing its city layout in a long-term bid to alleviate pressure on limited land, aid economic development and absorb a rising population. According to a draft plan up until 2020, the downtown area will expand southwards to form a new city center around Changchun World Sculpture Park, Weixing Square and their outskirts, and the new development zone.[9]

Changchun is linked to the national highway network through the Changchun–Harbin Expressway, the Changchun–Jilin-Huichun Expressway and the busiest section in the province, the Changchun-Jilin North Highway. This section connects the two biggest cities in Jilin and is the trunk line for the social and economic communication of the two cities.[9] 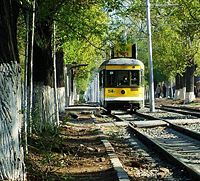 Changchun is served by a comprehensive bus system, as well as one traditional tram route (route 54). Most buses and the tram charge 1 Yuan (元) per ride. Changchun also has as a modern light rail line that began revenue service in 2002 and is undergoing extension. Private automobiles are becoming very common on the city's congested streets. Bicycles are relatively rare compared to other northeastern Chinese cities, but mopeds, as well as pedal and even animal-drawn carts are relatively common.

Changchun has three passenger rail stations, though most trains only stop at the central Changchun Railway Station (simplified Chinese: 长春站; traditional Chinese: 長春站), where there are multiple daily departures to other northeast cities such as Jilin City, Harbin, Shenyang, and Dalian, as well as Beijing.

Changchun Longjia International Airport (simplified Chinese: 长春龙嘉国际机场; traditional Chinese: 長春龍嘉國際機場) opened in 2005 and serves as the main civilian airport for both Changchun and Jilin. By Taxi, it takes about 45 minutes to reach downtown from the airport. A new high speed train which started service in 2011 takes about 10 minutes to reach the downtown train station. Domestic flights are available to 20 cities including Beijing, Shanghai, Guangzhou and Shenzhen. Currently international and regional flights are available to Hong Kong, Seoul and Tokyo, but the airport hopes to create more domestic and international flights, setting its sights on flights to the Americas.

Changchun is a very compact city, planned by the Japanese with a layout of open avenues and public squares. Despite once having the most complex tram system in Northern China, there is now only one remaining route open. However, Changchun is notable for having China’s first urban light rail system, opened in 2002, which was developed from the existing tramway system. There is currently one line encompassing 14.6 kilometers of track with plans to expand the system to an eventual 179 kilometers of track.[9]

Changchun is headquarters of the 16th Group Army of the People's Liberation Army, one of the three group armies that comprise the Shenyang Military Region responsible for defending China's northeastern borders with Russia and North Korea.

Changchun is twinned with: