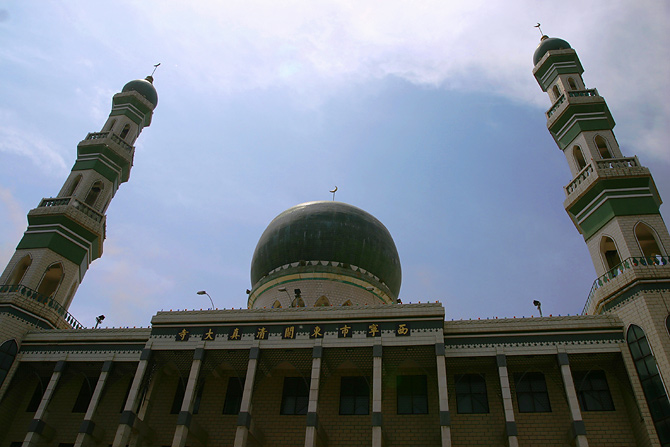 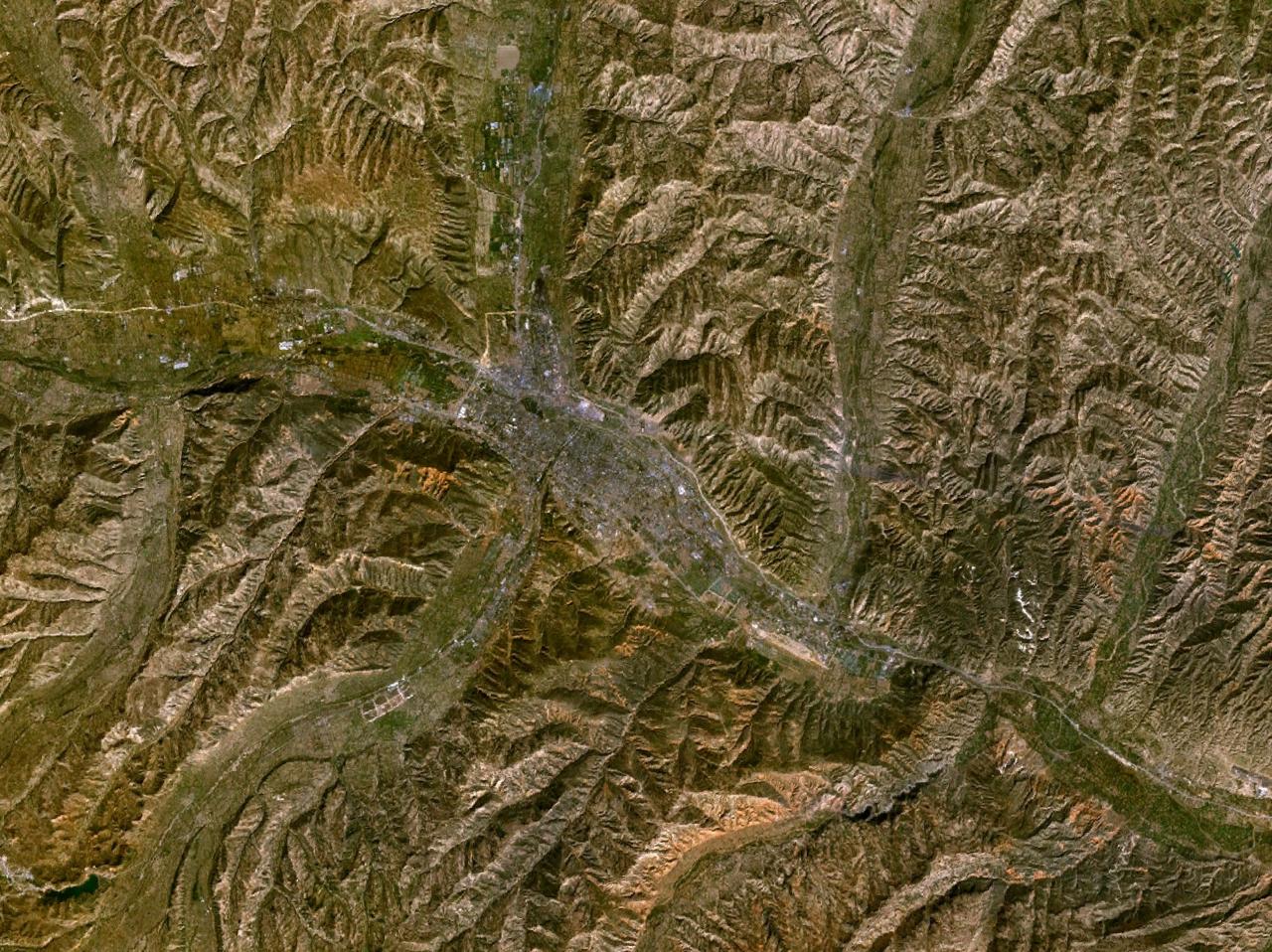 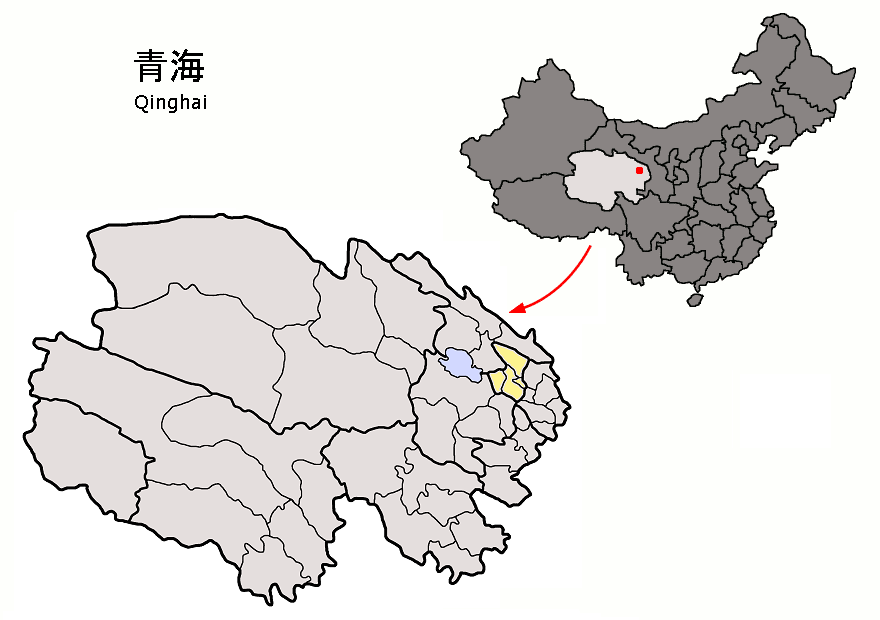 Xining is located in the eastern part of province and lies on the . It has a total area of 350 km².

Xining is located on the eastern edge of and the upper reaches of Huangshui River. It is the political, economic, scientific and technological, cultural and traffic center of Qinghai Province with an average altitude of over 2200 meters (about 7217 feet). The activities of human beings in this region can be traced to 2,100 years ago. During the Western and Eastern Han Dynasties, owing to its developing , Xining was paid more attention due to its economic and martial significance. As well as being the important hinge between the central plains and the western part of China in ancient time, Xining was the most common passing channel of the famous . Until now, it is still the only road by which to enter the hinterland of the Qinghai-Tibet Plateau.

At present, five districts, three counties and a national economic and technological development zone are under the administration of the local government. With a population of more than two million, Xining is the first city on the upper reaches of the to achieve a population into the millions. There are about 37 nationalities living here, including Han, , and Tibetan. The local traditions and customs are influenced by these distinctive nationalities, in particular the (Muslim) and Tibetan group.

Xining is also called the Summer Resort Capital of China for its cool summer. The region also provides a number of attractions making a visit to the area well worth considering. The scenery of the , situated within Xining, provides an escape from fervent cities and allows you to experience beautiful natural sceneries. The , situated on the northwest of Qinghai Lake, is waiting to present you with an extensive array of birds. To the southwest of Xining, is the birthplace of the founder of the ; an important Tibetan Buddhist monastery, was built there. Climbing the temple will reward you with a view of the city from the mountaintop. A site not to be missed is the Dongguan Mosque, one of the biggest mosques in northern China.

In 2007, the lent US$1 billion to aid in Xining, including 's anti- project, with an added US$1 billion dollars to support infrastructure. Qinghai has invested large amounts in the treatment of Huangshui Main River and Nanchuan River, totalling 24.5 km. However, a treatment on a 40 kilometer river course and 10 flash flood relief channels remain pending due to lack of equipment. In Sanxian County, a 108.4 meter long river course and 80 flash flood relief channels need treatment.

Xining has a history of over 2100 years [ [http://www.xining.gov.cn/English/English_1.html Xining Municipal Peoples Government] ] and was a chief commercial hub on the caravan route to , handling especially timber, wool and salt in ancient times. The trade along the Hexi Corridor was part of a larger trade corridor along the , whose use was intensified in the first century after efforts by the to control this route. [ [http://www.megalithic.co.uk/article.php?sid=18006 "Silk Road, North China", C.Michael Hogan, the Megalithic Portal, ed. A. Burnham] ]

Under the Han dynasty (206 BC–AD 220) a county there called Linqiang controlled the local Qiang tribesmen. It was again a frontier county under the Sui (581–618) and Tang (618–907) dynasties; during the 7th and early 8th centuries it was a center of constant warfare with the and (later) the s. In 763 it was overrun by the Tibetans and while under Tibetan control was known to the Chinese as "Qingtangcheng". Recovered by the in 1104, it received the name (meaning "peace in the west") and has been the seat of a prefecture or superior prefecture under that name since that time. With the rise of (), which began in the 7th century AD, Xining became an important religious center; Qinghai's largest , a holy place to the of Buddhists, was located at Kunbum, some 19 km to the southeast.

A major earthquake occurred , and measured 8.6 on Richter scale. It was one of the deadliest earthquakes with a total count of 200,000 deaths. It also caused large land fractures.

Since the late 1950s, when the Liujia Gorge Dam and project came into operation in neighboring Gansu province, Xining has been linked by a high-tension electrical grid to both Liujia and Lanzhou. It also uses local from mines at to the north. A modern woolen mill was installed at Xining before 1957. The city also has a leather industry and is a market for salt from the region. During the late 1950s medium-sized iron and steelworks were built there, supplying metal to Lanzhou.

Construction of a highway to the mineral-rich basin and completion in 1959 of a link to the Chinese rail network via in Gansu province has spurred industrial development. This effort was part of a plan of the central government to rapidly exploit oil and pasturage in the Xining area beginning in the 1950s. [ [http://mcx.sagepub.com/cgi/content/abstract/29/4/455 Greg Rohlf, "Dreams of Oil and Fertile Fields", Modern China, Vol. 29, No. 4, 455-489 (2003)] ]

The GDP per capita was ¥16,029 (ca. US$2,100) in 2007, ranked no. 382 among 659 Chinese cities. Its main industries are wool spinning and textiles, fur, meat, milk, salt, and light processing industries. Another popular activity is Tibetan dancing in Xining Square.

Xining is situated in a fertile mountain basin in the valley of the Huangshui (river), a tributary of the Yellow River, that acts as a river port. The city lies about 200 km west of in Province, on what was traditionally the main trade route from into and the . These routes are now followed by modern s. Since 1959 Xining has been connected by to the main Chinese system at Lanzhou; this railway extends into the Qaidam area via near to .

Located in the southwest part of Xining City, the Ta'er Monastery is one of six famous monasteries in the (also called ) of Tibetan Buddhism. Having a history of over 600 years, the , located in the Xining City Zone, is one of the most famous mosques in the northwest region of China. It has splendid and diversiform towers, walls and halls in the mosque. Another unique religious structure is the (North Mountain Temple), a facility.

The Xining region is also replete with natural scenic attractions. One is the Sun and Moon Mountain which divides Qinghai Province into two parts - the stock-raising area and the farming area. Another not-to-be-missed destination is the and . This alluring body of water is home to hundreds of thousands of birds. About 35 kilometers west of Xining City in Datong County, you can experience the magical power of Laoye Mountain. Every year on the 6th day of the 6th lunar month, the traditional singing festival attracts hundreds of thousands of visitors.

As the capital of Qinghai Province, Xining almost boasts all varieties of local flavors. Xining's cuisine is distinct from other varieties of Chinese cities using mainly food products native to the area. Food here is substantial, but quite inexpensive.

A unique feature of snacks in Xining is that they are given names after the surname of their initiator. Some of the famous ones will be introduced in next context. Liangfen (bean jelly) is made from pea powder and cut into short strips. Liangfen is served with vinegar, chili and mashed garlic, mustard and salt to enhance the taste the dish. Niangpi is a popular snack made of flour and baking soda. It can be found anywhere in Xining for four-yuan. The most famous version of this snack is called Mazhong Niangpi and can be found in the Mojia Jie. Zasui Tang is a soup cooked with lamb and oxen entrails. Locals often eat this snack for breakfast. The hot soup helps warm people during the winter. Muslim Yoghurt is a must while in Xining – this breakfast is a kind of yoghurt made by local Muslim families and is served in small bowls for one-yuan. Terrine is a popular and inexpensive snack in Xining. It is a small hot pot which contains beef, mutton, been curd and vermicelli. Mutton Eaten with Fingers is the most famous snack in Qinghai Province. It is made of fresh mutton and served with a little salt. This snack is the favorite food of the herdsmen of Qinghai Province.

In Xining, some restaurants serve varieties of 'plateau flavor', such as Feng'er Liji (a round lamb tenderloin), Danbai Chongcao Ji (a medicine cuisine made of chicken, Chinese caterpillar fungus and eggs), Jinyu Facai (pork wrapped in flabelliform nostoc and shaped as a goldfish) among others. These dishes are often cooked by the locals at home.