For other uses, see Datong (disambiguation). 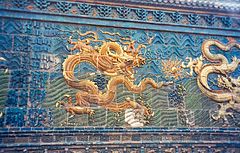 Near here was the Beidi kingdom of Tai which was conquered by the Zhou dynasty in 457BC. It bordered on the Hu nomads and traded in horses. Tai was later a commandery or county.

The town was founded as Píngchéng (平城) in 200 BC during the Han Dynasty, after the Battle of Baideng between the Han and the Xiongnu. Located near the Great Wall Pass to Inner Mongolia. It blossomed during the following period and became a stop-off point for Camel Caravans moving from China into Mongolia and beyond. It was sacked at the end of the Eastern Han Dynasty. Pingcheng became the capital of Northern Wei from 398 AD until 494 AD. The famous Yungang Grottoes (云冈石窟 Yúngāng Shíkū) were constructed during the later part of this period (460 – 494 AD).

Datong is the northernmost city of Shanxi, and is located in the Datong Basin. The urban area is surrounded on three sides by mountains, with passes only to the east and southwest. Within the prefecture elevations generally increase from southeast to northwest. The prefecture ranges in latitude from 39° 03' to 40° 44' N and in longitude from 112° 34' to 114° 33' E. Datong borders Inner Mongolia to the northwest and Hebei to the east. Neighbouring prefectures within Shanxi are Shuozhou and Xinzhou, with Ulanqab in Inner Mongolia and Zhangjiakou in Hebei also bordering Datong.

The well-known Datong Volcanic Arc lies nearby in the Datong Basin.

Datong has a continental, monsoon-influenced steppe climate (Köppen BSk), influenced by the elevation of above 1,000 metres (3,300 ft), with rather long, cold, very dry winters, and very warm summers. Monthly mean temperatures range from −10.6 °C (12.9 °F) in January to 22.0 °C (71.6 °F) in July; the annual mean temperature is 6.97 °C (44.5 °F). Due to the aridity and elevation, nighttime lows are often significantly lower than daytime highs, with an annual mean diurnal temperature variation of 13.3 °C (23.9 °F). There barely is any precipitation during winter, and more than ¾ of the annual precipitation occurs from June to September. The area receives upwards of 60% (2670 hours) of the possible amount of sunshine per year.

The Mining District (矿区, Kuàng Qū) is largely made up of separate mines throughout the metropolitan area. 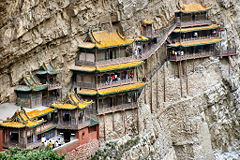 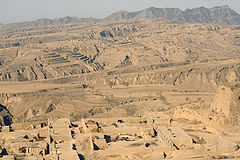 The Yungang Grottoes, or Cloud Ridge Caves (云冈石窟 Yúngāng Shíkū)are a collection of shallow caves located 16 km west of Datong. There are over 50,000 carved images and statues of Buddhas and bodhisattvas within these grottoes, ranging from 4 centimeters to 7 meters tall. Most of these icons are around 1000 years old.

Within the city itself, there are a few surviving sites of historical interest such as the Nine-Dragon Wall, the Huayan Monastery(华严寺 Huá Yán Sì), and the Shanhua Temple(善化寺 Shàn Huà Sì). Further afield is the Hanging Temple (悬空寺 Xuán Kōng Sì) built into a cliff face near Mount Heng. Most of the historical sites in this region date to the Tang and Ming dynasties, but the Hanging Temple dates to the Northern Wei dynasty (386-534).

The railway locomotive works (see below) began to attract increasing numbers of railway enthusiasts from the 1970s. When construction of steam locomotives was phased out, the authorities did not want to lose this valuable tourism market, and pondered the possibility of developing a steam railway operating centre as an attraction. A number of study visits were undertaken to the East Lancashire Railway at Bury, and a twinning arrangement was concluded with that town. 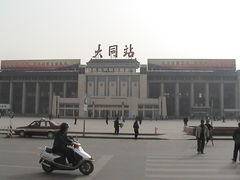 Due to its strategic position it is also an important distribution and warehousing center for Shanxi, Hebei and Inner Mongolia.[1]

Datong is an old fashioned coal mining city in China, and still sits on significant reserves of this commodity. Consequently it has developed a reputation as one of China’s most polluted cities. The Datong Coal Mining Group is based here and is China’s third largest such enterprise. Datong is indeed however an emerging economy, as the city seeks to loosen its dependence on coal, introduce more environmentally friendly and efficient methods of extraction and move into other areas of business services. Local government has continued to upgrade its pillar coal sector (and related industries like coal chemicals, power and metallurgy), while also developing "substitute industries" such as machinery manufacturing, tourism and distribution, warehousing and logistics services. This has had some impact. Datong's GDP grew by 5.1 percent in 2008 to RMB56.6 billion.[2]

While coal will continue to dominate, Datong has been identified as one of the key cities requiring redevelopment, with part of this being in environmental cleanup, rehabilitation and industrial refocusing. Datong is a pilot city for rehabilitation studies following years of pollution. To this end it has already struck up strong relationships with other cities worldwide with similar backgrounds, and has begun plans, for example, to develop a tourism base focused on steam engine technology with antique locomotives to be used along designated tracks.[3]

Datong has a large railway locomotive works 'Datong locomotive factory', where the 'Aiming Higher'[clarification needed] class of steam locomotive was built as late as the 1970s, steam locomotive production ended in the late 1980s and the plants main products (as of 2010) is main line electric locomotives

Datong is twinned with: