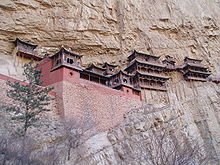 Like the other four sacred Daoist mountains in China, Heng Shan has been considered a sacred mountain since the Zhou Dynasty. Due to its northerly location, the mountain has made it impossible for pilgrimages by the Chinese to take place for much of its history. Because of this, Hengshan is not nearly as religiously important in China as the other four Daoist mountains.[1]

During the Han Dynasty, a temple called the Shrine of the Northern Peak (Beiyue Miao), dedicated to the mountain god was built on Hengshan's slopes. While periodically destroyed and rebuilt, this temple has an uninterrupted history from Han times to the present day.[1] During times of occupation by non-Han Chinese people, worship to Hengshan was done at the Beiyue Temple in Quyang.

The most famous temple at Hengshan is not Daoist, but is actually the Buddhist Hanging Monastery (Xuankong Si).[1] The Hanging Monastery stands at the foot of Mt. Hengshan and is one of the most dramatic sights at Hengshan - a wooden temple clinging to the cliff side, appearing to defy gravity with only a few wooden posts as support. The Hanging Monastery, built in 491, has survived more than 1,400 years. The extant monastery was largely rebuilt and maintained in the Ming Dynasty (1368–1644) and Qing Dynasty (1644–1911). The buildings were restored in 1900 and there are 40 wooden halls and structures linked by an ingenious system of pillars, posts and walkways.