Wudang Mountains
This article is about the Wudang region in Hubei, China. For other uses, see Wu-Tang (disambiguation).

The Wudang Mountains (simplified Chinese: 武当山; traditional Chinese: 武當山; pinyin: Wǔdāng Shān, pronounced [ùtɑ́ŋ ʂán]), also known as Wu Tang Shan or simply Wudang, are a small mountain range in the northwestern part of Hubei Province of People's Republic of China, just to the south of the city of Shiyan.

On Chinese maps, the name "Wudangshan" (武当山) is applied both to the entire mountain range (which runs east-west along the southern edge of the Hanshui River valley, crossing several county-level divisions of Shiyan Prefecture-level city), and to the small group of peaks located within Wudangshan Jiedao of the Danjiangkou County-level City of the Shiyan Prefecture-level city. It is the latter specific area which is known as a Taoist center.[1]

Modern maps show the elevation of the highest of the peaks in the Wudang Shan "proper" as 1612 meters;[1][2] however, the entire Wudangshan range has somewhat higher elevations elsewhere.[1] Some consider the Wudang Mountains to be a "branch" of the Daba Mountains range,[2] which is a major mountain system of the western Hubei, Shaanxi, Chongqing and Sichuan.

In years past, the mountains of Wudang were known for the many Taoist monasteries to be found there, monasteries which became known as an academic centre for the research, teaching and practice of meditation, Chinese martial arts, traditional Chinese medicine, Taoist agriculture practices and related arts. As early as the Eastern Han Dynasty (25–220 AD), the mountain attracted the Emperor's attention. During the Tang Dynasty (618–907), the first site of worship—the Five Dragon Temple—was constructed. Some of the monasteries were damaged during and after the Cultural Revolution of 1966–1976, but the Wudang mountains have lately become increasingly popular with tourists from elsewhere in China and abroad due to their scenic location and historical interest. The monasteries and buildings were made a UNESCO World Heritage Site in 1994. The palaces and temples in Wudang, contains Taoist buildings from as early as the 7th century,[3] and the largest groups of complex on the mountain was built during the Ming Dynasty (14th–17th centuries).[3] It represents the highest standards of Chinese art and architecture over a period of nearly 1,000 years. Noted temples include the Golden Hall, Nanyan Temple and the Purple Cloud Temple.

On January 19, 2003, the 600-year-old Yuzhengong Palace at the Wudang Mountains was accidentally burned down by an employee of a martial arts school.[4] A fire broke out in the hall, reducing the three rooms that covered 200 square metres to ashes. A gold-plated statue of Zhang Sanfeng, which was usually housed in Yuzhengong, was moved to another building just before the fire, and so escaped destruction in the inferno.[5]

A Taoist monastery at Wudang Mountains 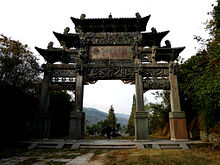 The Gate of Yuan Wu at Wudang Mountains

According to legend,[clarification needed] Zhang Sanfeng (张三丰), is the originator of Wudangquan generally and Taijiquan specifically. He was said to be inspired by a fight he witnessed between a pied magpie (also said to be a white crane) and a viper.

From the early 20th century, Taijiquan, Xingyiquan and Baguazhang have been considered Wudang styles, following Sun Lutang. Following this classification the national martial arts tournament of the Central Guoshu Institute held in 1928 separated the participants into "Shaolin" and "Wudang".

The third biannual Traditional Wushu Festival was held in Wudang Mountains from October 28 to November 2, 2008.[6]