The Shaolin Monastery or Shaolin Temple (Chinese: 少林寺; pinyin: Shàolín Sì; Wade–Giles: Shao-lin Szu; Cantonese Yale: Síulàhm Jih, pronounced [ʂɑ̂ʊ̯lǐn sî]) is a Chán Buddhist temple at Song Shan near Zhengzhou City Henan Province in Dengfeng, China. It is led by Venerable abbot Shi Yǒngxìn. Founded in the 5th century, the monastery is long famous for its association with Chinese martial arts and particularly with Shaolin Kung Fu, and it is the Mahayana Buddhist monastery perhaps best known to the Western world.[1] The Shaolin Monastery and its famed Pagoda Forest were inscribed as a UNESCO World Heritage Site in 2010 as part of the "Historic Monuments of Dengfeng."[2]

The shào (少) in "Shaolin" refers to "Mount Shaoshi", a mountain in the Songshan mountain range and lín (林) means "forest". With sì (寺), the name literally means "monastery/temple in the woods of Mount Shaoshi". Others, such as the late master Chang Dsu Yao[3] translate "Shaolin" as "young (new) forest" or sometimes "little forest".

The first Shaolin Monastery abbot was Batuo (also called Fotuo or Buddhabhadra, not to be confused with Bodhidharma) a dhyana master who came to China from India in AD 464 to spread Buddhist teachings.[4]

According to the Continued Biographies of Eminent Monks (AD 645) by Dàoxuān, the Shaolin Monastery was built on the north side of Shaoshi, the central peak of Mount Song, one of the Sacred Mountains of China, by Emperor Xiaowen of the Northern Wei Dynasty in AD 477. Yang Xuanzhi, in the Record of the Buddhist Monasteries of Luoyang (AD 547), and Li Xian, in the Ming Yitongzhi (AD 1461), concur with Daoxuan's location and attribution. The Jiaqing Chongxiu Yitongzhi (AD 1843) specifies that this monastery, located in the province of Henan, was built in the 20th year of theTàihé era of the Northern Wei Dynasty, that is, the monastery was built in AD 497.

Kangxi, the second Qing emperor, was a supporter of the Shaolin temple in Henan and he wrote the calligraphic inscriptions that hang over the Heavenly King Hall and the Buddha Hall to this day.[5] 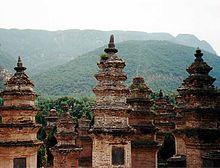 The monastery has been destroyed and rebuilt many times. In 1641 the troops of anti-Ming rebel Li Zicheng sacked the monastery due to the monks' support of the Ming and the possible threat they posed to the rebels. This effectively destroyed the temple's fighting force.[6]

Perhaps the best-known story of the Temple's destruction is that it was destroyed by the Qing government for supposed anti-Qing activities. Variously said to have taken place in 1647 under the Shunzhi Emperor, in 1674 under the Kangxi Emperor, or in 1732 under the Yongzheng Emperor, this destruction is also supposed to have helped spread Shaolin martial arts through China by means of the five fugitive monks.

Some accounts claim that a supposed southern Shaolin Temple was destroyed instead of, or in addition to, the temple in Henan: Ju Ke, in the Qing bai lei chao (1917), locates this temple in Fujian Province. These stories commonly appear in legendary or popular accounts of martial history, and in martial arts fiction.

While these latter accounts are common among martial artists, and often serve as origin stories for various martial arts styles, their accuracy is questionable. The accounts are known through often inconsistent 19th-century secret society histories and popular literature, and also appear to draw on both Fujianese folklore and popular narratives such as the Water Margin. Modern scholarly attention to the tales is mainly concerned with their role as folklore.[7][8] 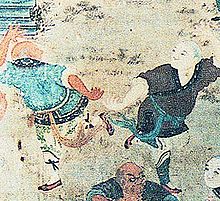 A mural painting in the temple (early 19th century) 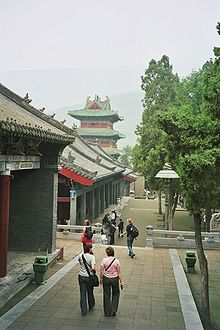 Walking through the alley of the monastery 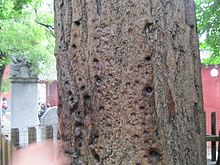 There is evidence of Shaolin martial arts techniques being exported to Japan in the 18th and 19th centuries. Okinawan Shōrin-ryū karate (小林流), for example, has a name meaning "Small [Shao]lin".[9] Other similarities can be seen in centuries-old Chinese and Japanese martial arts manuals.[10]

In 1928, the warlord Shi Yousan set fire to the monastery, burning it for over 40 days, destroying 90 percent of the buildings including many manuscripts of the temple library.[11]

The Cultural Revolution launched in 1966 targeted religious orders including the monastery. The five monks who were present at the monastery when the Red Guard attacked were shackled and made to wear placards declaring the crimes charged against them.[11] The monks were jailed after publicly being flogged and paraded through the street as people threw rubbish at them.[11] The government purged Buddhist materials from within the monastery walls, leaving it barren for years.

Martial arts groups from all over the world have made donations for the upkeep of the temple and grounds, and are subsequently honored with carved stones near the entrance of the temple.

According to Matthew Polly, a travel writer and martial artist, during the Tang Dynasty, Emperor Taizong granted the Shaolin Temple extra land and special "imperial dispensation" to eat meat, and drink, which would make Shaolin the only temple in China that did not prohibit alcohol, although this practice has ceased today.[12] However, Polly's statement is not corroborated in any period documents, such as the Shaolin Stele erected in 728 AD. The stele does not list any such imperial dispensation as reward for the monks' assistance during the campaign against Wang Shichong, only land and a water mill are granted.[13] Historian Meir Shahar is unsure if the popular tale about wine and meat consumption originated after the released of films like Shaolin Temple.[14]

In the past, many people have tried to capitalize on the Shaolin Monastery's fame by building their own schools on Mount Song. However, the Chinese government eventually outlawed this, and so the schools all moved to the nearby towns. However, as of 2010, the Ta Gou kung fu school, one of the largest kung fu schools in China, owns and practices on land below the Shaolin Temple.[15]

A Dharma gathering was held between August 19 and 20, 1999, in the Shaolin Monastery, Songshan, China, for Buddhist Master Shi Yongxin to take office as abbot. In March 2006 Vladimir Putin, then President of Russia, became the first foreign leader to visit the monastery. In 2007 the Chinese government partially lifted the 300-year ban of the Jieba. The Jieba is an ancient ceremony where nine marks are burned onto the head with sticks of incense. The ban was partially lifted only for those who were mentally and physically prepared to participate in the ancient tradition.

Two luxury bathrooms were recently added to the temple for use by monks and tourists. The new bathrooms reportedly cost three million yuan.[16] 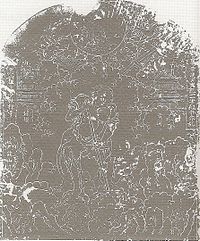 1517 stele dedicated to Narayana's defeat of the Red Turban rebels. Guanyin (his original form) can be seen in the clouds above his head.

In his book The Shaolin Monastery (2008), Tel Aviv University Prof. Meir Shahar notes the Bodhisattva Vajrapani is the patron saint of the Shaolin Monastery. A short story appearing in Zhang Zhuo's (660-741) Tang anthology shows how the deity had been venerated in the Monastery from at least the eighth century. It is an anecdotal story of how the Shaolin monk Sengchou (480-560) gained supernatural strength and fighting ability by praying to Vajrapani and being force-fed raw meat.[17] Shaolin abbot Zuduan (1115–1167) erected a stele in his honor during the Song Dynasty.[18] It reads:

According to the scripture [Lotus Sutra], this deity (Narayana) is a manifestation of Avalokitesvara (Guanyin).[19][20] If a person who compassionately nourishes all living beings employs this [deity's] charm, it will increase his body's strength (zengzhang shen li). It fulfills all vows, being most efficacious. ... Therefore those who study Narayana's hand-symbolism (mudra), those who seek his spell (mantra), and those who search for his image are numerous. Thus we have erected this stele to spread this transmission.[21]
— Stele re-erected (chong shang) by Shaolin's abbot Zuduan

He was historically worshiped as the progenitor of their famous staff method by the monks themselves. A stele erected by Shaolin abbot Wenzai in 1517 shows the deity's vajra-club had by then been changed to a Chinese staff,[23] which originally "served as the emblem of the monk".[24] Vajrapani's Yaksha-like Narayana form was eventually equated with one of the four staff-wielding "Kimnara Kings" from the Lotus Sutra in 1575. His name was thus changed from Narayana to "Kimnara King".[25] One of the many versions of a certain tale regarding his creation of the staff method takes place during the Yuan Dynasty's Red Turban Rebellion. Bandits lay siege to the monastery, but it is saved by a lowly kitchen worker wielding a long fire poker as a makeshift staff. He leaps into the oven and emerges as a monstrous giant big enough to stand astride both Mount Song and the imperial fort atop Mount Shaoshi (which are five miles apart). The bandits flee when they behold this staff-wielding titan. The Shaolin monks later realize that the kitchen worker was none other than the Kimnara King in disguise.[26] Shahar notes the part of the kitchen worker might have been based on the actual life of the monk Huineng (638-713).[27] In addition, he suggests the mythical elements of the tale were based on the fictional adventures of Sun Wukong from the Chinese epic Journey to the West. He compares the worker's transformation in the stove with Sun's time in Laozi's crucible, their use of the staff, and the fact that Sun and his weapon can both grow to gigantic proportions.[28]

Statues and paintings of Kimnara were commissioned in various halls throughout Shaolin in honor of his defeat of the Red Turban army. A wicker statue woven by the monks and featured in the center of the "Kimnara Hall" was mentioned in Cheng Zongyou's seventeenth century training manual Shaolin Staff Method. However, a century later, it was claimed that Kimnara had himself woven the statue. It was destroyed when the monastery was set aflame by the KMT General Shi Yousan in 1928. A "rejuvenated religious cult" arose around Kimnara in the late twentieth century. Shaolin re-erected the shrine to him in 1984 and improved it in 2004.[29]

The Buddhist monk Bodhidharma is often popularly considered to be the creator of the monastery's arts. An example is provided by Wong Kiew Kit, who writes: "It was during this time that the Venerable Bodhidharma came from India to China to spread Buddhism. In 527 CE he settled down in the Shaolin monastery in Henan province, and inspired the development of Shaolin Kung Fu. This marked a watershed in the history of Kung Fu, because it led to a change of course, as Kung Fu became institutionalized. Before this, martial arts were known only in general sense."[30] Wong cites the "Sinew Metamorphosis" as being a qigong style that the Buddhist saint taught to the monks to strengthen their bodies.[31] All of these claims, however, are generally not supported by martial arts historians because the idea of Bodhidharma influencing Shaolin boxing is based on a forged qigong manual written during the 17th century. This is when a Taoist with the pen name "Purple Coagulation Man of the Way" wrote the Sinews Changing Classic in 1624, but claimed to have discovered it. The first of two prefaces of the manual traces this qigong style's succession from Bodhidharma to the Chinese general Li Jing via "a chain of Buddhist saints and martial heroes."[32] The work itself is full of anachronistic mistakes and even includes a popular character from Chinese fiction, the "Bushy Bearded Hero" (虬髯客), as a lineage master.[33] Literati as far back as the Qing Dynasty have taken note of these mistakes. The scholar Ling Tinkang (1757–1809) described the author as an 'ignorant village master'."[34]

Bodhidharma is traditionally said by Buddhists to have meditated at the temple and the important early Ch'an practitioner Shenhui locates it as the site at which Bodhidharma's disciple Hui-ke cut his own arm off to obtain the ineffable dharma.