Avalokiteśvara (Sanskrit: अवलोकितेश्वर lit. "Lord who looks down") is a bodhisattva who embodies the compassion of all Buddhas. He is one of the more widely revered bodhisattvas in mainstream Mahayana Buddhism.

In Sanskrit, Avalokitesvara is also referred to as Padmapāni ("Holder of the Lotus") or Lokeśvara ("Lord of the World"). In Tibetan, Avalokiteśvara is known as Chenrezig, སྤྱན་རས་གཟིགས་ (Wylie: spyan ras gzigs) and is said to be incarnated in the Dalai Lama,[1] the Karmapa[2][3] and other high lamas.

The name Avalokiteśvara is made of the following parts: the verbal prefix ava, which means "down"; lokita, a past participle of the verb lok ("to notice, behold, observe"), here used in an active sense (an occasional irregularity of Sanskrit grammar); and finally īśvara, "lord", "ruler", "sovereign" or "master". In accordance with sandhi (Sanskrit rules of sound combination), a+iśvara becomes eśvara. Combined, the parts mean "lord who gazes down (at the world)". The word loka ("world") is absent from the name, but the phrase is implied.[4]

It was initially thought that the Chinese mis-transliterated the word Avalokiteśvara as Avalokitasvara which explained why Xuanzang translated it as Guānzìzài (Ch. 觀自在) instead of Guānyīn (Ch. 觀音). However, according to recent research, the original form was indeed Avalokitasvara with the ending a-svara ("sound, noise"), which means "sound perceiver", literally "he who looks down upon sound" (i.e., the cries of sentient beings who need his help; a-svara can be glossed as ahr-svara, "sound of lamentation").[5] This is the exact equivalent of the Chinese translation Guānyīn. This etymology was furthered in the Chinese by the tendency of some Chinese translators, notably Kumarajiva, to use the variant Guānshìyīn (Ch. 觀世音), literally "he who perceives the world's lamentations" -- wherein lok was read as simultaneously meaning both "to look" and "world" (Skt. loka; Ch. 世, shì).[5] This name was later supplanted by the form containing the ending -īśvara, which does not occur in Sanskrit before the seventh century. The original form Avalokitasvara already appears in Sanskrit fragments of the fifth century.[6]

The original meaning of the name fits the Buddhist understanding of the role of a bodhisattva. The reinterpretation presenting him as an īśvara shows a strong influence of Śaivism, as the term īśvara was usually connected to the Hindu notion of Śiva as a creator god and ruler of the world. Some attributes of such a god were transmitted to the bodhisattva, but the mainstream of those who venerated Avalokiteśvara upheld the Buddhist rejection of the doctrine of any creator god.[7]

An etymology of the Tibetan name Chenrezig is chen (eye), re (continuity) and zig (to look). This gives the meaning of one who always looks upon all beings (with the eye of compassion).[8] 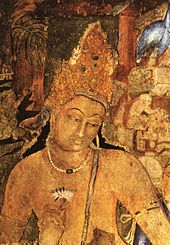 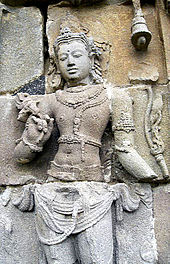 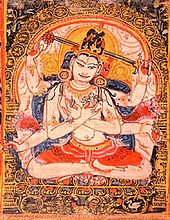 According to Mahāyāna doctrine, Avalokiteśvara is the bodhisattva who has made a great vow to assist sentient beings in times of difficulty, and to postpone his own Buddhahood until he has assisted every being on Earth in achieving Nirvāṇa. Mahāyāna sūtras associated with Avalokiteśvara include the following:

The Lotus Sūtra (Skt. Saddharma Puṇḍarīka Sūtra) is generally accepted to be the earliest literature teaching about the doctrines of Avalokiteśvara.[9] These are found in the Lotus Sūtra chapter 25, The Universal Gateway of Avalokitasvara Bodhisattva (Ch. 觀世音菩薩普門品). This chapter is devoted to Avalokitasvara, describing him as a compassionate bodhisattva who hears the cries of sentient beings, and who works tirelessly to help those who call upon his name. A total of 33 different manifestations of Avalokitasvara are described, including female manifestations, all to suit the minds of various beings. The chapter consists of both a prose and a verse section. This earliest source often circulates separately as its own sūtra, called the Avalokitasvara Sūtra (Ch. 觀世音經), and is commonly recited or chanted at Buddhist temples in East Asia.[10]

When the Chinese monk Faxian traveled to Mathura in India around 400 CE, he wrote about monks presenting offerings to Avalokiteśvara.[11] When Xuanzang traveled to India in the 7th century, he provided eyewitness accounts of Avalokiteśvara statues being venerated by devotees of all walks of life, from kings, to monks, to laypeople.[11] Avalokiteśvara remained popular in India until the 12th century when Muslim invaders conquered the land and destroyed Buddhist monasteries.[11]

In Chinese Buddhism and the Sinosphere, practices for an 18-armed form of Avalokiteśvara called Cundī are very popular. These practices have their basis in early Indian Esoteric Buddhism. Cundī is also referred to as "Cundī Buddha-Mother" or "Cundī Bhagavatī." The popularity of Cundī is attested by the three extant translations of the Cundī Dhāraṇī Sūtra from Sanskrit to Chinese, made from the end of the seventh century to the beginning of the eighth century.[12] In late imperial China, these early traditions of Esoteric Buddhism are known to have been still thriving in Buddhist communities. Robert Gimello has also observed that in these communities, the esoteric practices of Cundī were extremely popular among both the populace and the elite.[13]

In the Tiantai school, six forms of Avalokiteśvara are defined. Each of the bodhisattva's six qualities are said to break the hindrances respectively of the six realms of existence: hell-beings, pretas, animals, humans, asuras, and devas. These six qualities are listed below. 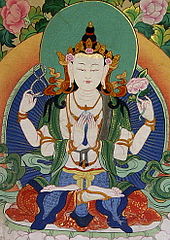 In the Tibetan tradition, Avalokiteśvara is seen as arising from two sources. One is the relative source, where in a previous eon (kalpa) a devoted, compassionate Buddhist monk became a bodhisattva, transformed in the present kalpa into Avalokiteśvara. That is not in conflict, however, with the ultimate source, which is Avalokiteśvara as the universal manifestation of compassion. The bodhisattva is viewed as the anthropomorphised vehicle for the actual deity, serving to bring about a better understanding of Avalokiteśvara to humankind.[citation needed]

In Sri Lanka, Avalokiteśvara is still venerated as Natha-deva, and his image is sometimes mistaken for that of the bodhisattva Maitreya.[14] 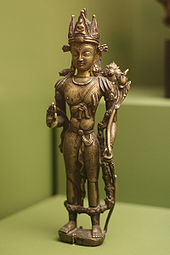 Western scholars have not reached a consensus on the origin of the reverence for Avalokiteśvara. Some have suggested that Avalokiteśvara, along with many other supernatural beings in Buddhism, was a borrowing or absorption by Mahayana Buddhism of one or more Hindu deities, in particular Shiva or Vishnu (though the reason for this suggestion is because the current name of the bodhisattva not the original one.)

The Japanese scholar Shu Hikosaka on the basis of his study of Buddhist scriptures, ancient Tamil literary sources, as well as field survey, proposes the hypothesis that, the ancient mount Potalaka, the residence of Avalokiteśvara described in the Gandavyuha Sutra and Xuanzang’s Records, is the real mountain Potikai or Potiyil situated at Ambasamudram in Tirunelveli district, Tamil Nadu.[15] Shu also says that mount Potiyil/Potalaka has been a sacred place for the people of South India from time immemorial. With the spread of Buddhism in the region beginning at the time of the great king Aśoka in the third century B.C.E., it became a holy place also for Buddhists who gradually became dominant as a number of their hermits settled there. The local people, though, mainly remained followers of the Hindu religion. The mixed Hindu-Buddhist cult culminated in the formation of the figure of Avalokiteśvara[16]

In Theravada, Lokeśvara, "the lord, ruler or sovereign beholder of the world", name of a Buddha; probably a development of the idea of Brahmā, Vishnu or Śiva as lokanātha, "lord of worlds". In Indo-China especially it refers to Avalokiteśvara, whose image or face, in masculine form, is frequently seen, e.g., at Angkor. The name Lokeśvara should not be confused with that of Lokesvararaja, the Buddha under whom Dharmakara became a monk and made forty-eight vows before becoming Amitabha Buddha. 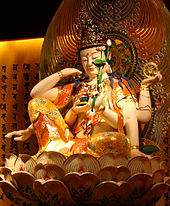 Avalokiteśvara statue in the form of Cintamani Wheel Avalokiteśvara. A dhāraṇī written in Siddham Sanskrit with the Siddhaṃ script behind. Singapore.

Due to his association with this mantra, in Tibetan Buddhism Avalokiteśvara is also called Shadakshari, which means "Lord of the Six Syllables." Recitation of this mantra along with prayer beads, is the most popular religious practice in Tibetan Buddhism.[17] The connection between this famous mantra and Avalokiteśvara occurs for the first time in the Kāraṇḍavyūha Sūtra. This text is first dated to around the late 4th century CE to the early 5th century CE.[18] In this sūtra, a bodhisattva is told by the Buddha that recitation of this mantra while focusing on the sound can lead to the attainment of eight hundred samādhis.[19] The Kāraṇḍavyūha Sūtra also features the first appearance of the Cundī Dhāraṇī, which occurs at the end of the sūtra text.[12] After the bodhisattva finally attains samādhi with the mantra "oṃ maṇipadme hūṃ," he is then able to observe 77 koṭīs of fully enlightened buddhas replying in one voice with the Cundī Dhāraṇī:

In Shingon Buddhism, the mantra for Avalokiteśvara is:

One prominent Buddhist story tells of Avalokiteśvara vowing never to rest until he had freed all sentient beings from samsara. Despite strenuous effort, he realizes that still many unhappy beings were yet to be saved. After struggling to comprehend the needs of so many, his head splits into eleven pieces. Amitabha Buddha, seeing his plight, gives him eleven heads with which to hear the cries of the suffering. Upon hearing these cries and comprehending them, Avalokiteśvara attempts to reach out to all those who needed aid, but found that his two arms shattered into pieces. Once more, Amitabha Buddha comes to his aid and invests him with a thousand arms with which to aid the suffering multitudes.[20]

The Bao'en Temple located in northwestern Sichuan province, China has an outstanding wooden image of the thousand armed Avalokiteśvara, an example of Ming Dynasty decorative sculpture.[21]

Avalokiteśvara is an important deity in Tibetan Buddhism, and is regarded in the Vajrayana teachings as a Buddha.[22] In the Mahayana teachings he is in general regarded as a high-level Bodhisattva. The Dalai Lama is considered by the Gelugpa sect and many other Tibetan Buddhists to be the primary earthly manifestation of Chenrezig. The Karmapa is considered by the Karma Kagyu sect to be Chenrezig's primary manifestation. It is said that Padmasambhava prophesied that Avalokiteśvara will manifest himself in the Tulku lineages of the Dalai Lamas and the Karmapas.[citation needed]Another Tibetan source explains that Buddha Amithaba gave to one of his two main disciples, Avalokiteśvara, the task to take upon himself the burden of caring for Tibet. That is why he has manifested himself not only as spiritual teachers in Tibet but also in the form of kings (like Trisong Detsen) or ministers.[citation needed]

Other manifestations popular in Tibet include Sahasra-bhuja (a form with a thousand arms) and Ekādaśamukha (a form with eleven faces).[citation needed]

In Tibetan Buddhism, Tara came into existence from a single tear shed by Chenrezig. When the tear fell to the ground it created a lake, and a lotus opening in the lake revealed Tara. In another version of this story, Tara emerges from the heart of Chenrezig. In either version, it is Chenrezig's outpouring of compassion which manifests Tara as a being[23][24][25]

Avalokiteśvara has an extraordinarily large number of manifestations in different forms (including wisdom goddesses (vidyaas) directly associated with him in images and texts). Some of the more commonly mentioned forms include: