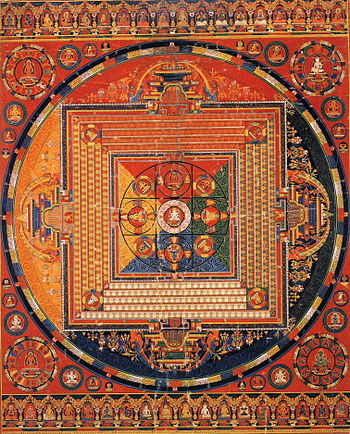 Maṇḍala (मण्डल) is a Sanskrit word that means "circle". In the Buddhist and Hindu religious traditions their sacred art often takes a mandala form. The basic form of most Hindu and Buddhist mandalas is a square with four gates containing a circle with a center point. Each gate is in the shape of a T.[1][2]

These mandalas, concentric diagrams, have spiritual and ritual significance in both Buddhism and Hinduism.[3][4] The term is of Hindu origin and appears in the Rig Veda as the name of the sections of the work, but is also used in other Indian religions, particularly Buddhism. In the Tibetan branch of Vajrayana Buddhism, mandalas have been developed into sandpainting. They are also a key part of anuttarayoga tantra meditation practices.

In various spiritual traditions, mandalas may be employed for focusing attention of aspirants and adepts, as a spiritual teaching tool, for establishing a sacred space, and as an aid to meditation and trance induction. According to the psychologist David Fontana, its symbolic nature can help one "to access progressively deeper levels of the unconscious, ultimately assisting the meditator to experience a mystical sense of oneness with the ultimate unity from which the cosmos in all its manifold forms arises."[5] The psychoanalyst Carl Jung saw the mandala as "a representation of the unconscious self,"[citation needed] and believed his paintings of mandalas enabled him to identify emotional disorders and work towards wholeness in personality.[6]

In common use, mandala has become a generic term for any plan, chart or geometric pattern that represents the cosmos metaphysically or symbolically, a microcosm of the Universe from the human perspective.[citation needed] 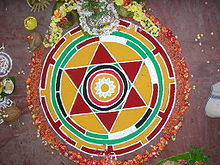 A yantra is a two- or three-dimensional geometric composition used in sadhanas, or meditative rituals. It is thought to be the abode of the deity. Each yantra is unique and calls the deity into the presence of the practitioner through the elaborate symbolic geometric designs. According to one scholar, “Yantras function as revelatory symbols of cosmic truths and as instructional charts of the spiritual aspect of human experience"[7]

Many situate yantras as central focus points for Hindu tantric practice.Yantras are not representations, but are lived, experiential, nondual realities. As Khanna describes:

Despite its cosmic meanings a yantra is a reality lived. Because of the relationship that exists in the Tantras between the outer world (the macrocosm) and man’s [sic] inner world (the microcosm), every symbol in a yantra is ambivalently resonant in inner-outer synthesis, and is associated with the subtle body and aspects of human consciousness.[8]

Note: maṇḍala is also the term used to describe any of the ten books of Rig Veda, a sacred Vedic and Hindu scripture (sruti).

Painted 17th century Tibetan 'Five Deity Mandala', in the center is Rakta Yamari (the Red Enemy of Death) embracing his consort Vajra Vetali, in the corners are the Red, Green White and Yellow Yamaris, Rubin Museum of Art

The mandala can be found in the form of the Stupa[9] and in the Atanatiya Sutta[10] in the Digha Nikaya, part of the Pali Canon. This text is frequently chanted. 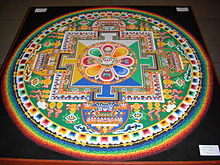 A kyil khor (Tibetan: དཀྱིལ་འཁོར, Wylie: dkyil 'khor), Tibetan for mandala in Vajrayana Buddhism usually depicts a landscape of the "Buddha-land", or the enlightened vision of a Buddha, which inevitably represents the nature of experience and the intricacies of both the enlightened and confused mind, or "a microcosm representing various divine powers at work in the universe."[4] Such mandalas consist of an outer circular mandala and an inner square (or sometimes circular) mandala with an ornately decorated mandala "palace"[11] placed at the center. Any part of the inner mandala can be occupied by Buddhist glyphs and symbols,[12] as well as by images of its associated deities, which "symbolise different stages in the process of the realisation of the truth."[13]

Kværne (1975: p. 164) in his extended discussion of sahaja, discusses the relationship of sadhana interiority and exteriority in relation to mandala thus:

"...external ritual and internal sadhana form an indistinguishable whole, and this unity finds its most pregnant expression in the form of the mandala, the sacred enclosure consisting of concentric squares and circles drawn on the ground and representing that adamant plane of being on which the aspirant to Buddha hood wishes to establish himself. The unfolding of the tantric ritual depends on the mandala; and where a material mandala is not employed, the adept proceeds to construct one mentally in the course of his meditation." [NB: gendered language repaired in square parenthesis; first example employed "him", the second example "his"][14]

Mandalas are commonly used by tantric Buddhists as an aid to meditation. More specifically, a Buddhist mandala is envisaged as a "sacred space," a "Pure Buddha Realm,"[15] and also as an abode of fully realised beings or deities.[13] While on the one hand, the mandala is regarded as a place separated and protected from the ever-changing and impure outer world of samsara,[16] and is thus seen as a "Buddhafield"[17] or a place of Nirvana and peace, the view of Vajrayana Buddhism sees the greatest protection from samsara being the power to see samsaric confusion as the "shadow" of purity (which then points towards it). By visualizing "pure lands," one learns to understand experience itself as pure, and as the abode of enlightenment. The protection that we need, in this view, is from our own minds, as much as from external sources of confusion. In many tantric mandalas, this aspect of separation and protection from the outer samsaric world is depicted by "the four outer circles: the purifying fire of wisdom, the vajra circle, the circle with the eight tombs, the lotus circle."[18] The ring of vajras forms a connected fence-like arrangement running around the perimeter of the outer mandala circle.[19]

The mandala is also "a support for the meditating person,"[18] something to be repeatedly contemplated to the point of saturation, such that the image of the mandala becomes fully internalised in even the minutest detail and can then be summoned and contemplated at will as a clear and vivid visualized image. With every mandala comes what Tucci calls "its associated liturgy...contained in texts known as tantras,"[20] instructing practitioners on how the mandala should be drawn, built and visualised, and indicating the mantras to be recited during its ritual use.

As a meditation on impermanence (a central teaching of Buddhism), after days or weeks of creating the intricate pattern of a sand mandala, the sand is brushed together and placed in a body of running water to spread the blessings of the mandala.

A mandala can also represent the entire universe, which is traditionally depicted with Mount Meru as the axis mundi in the center, surrounded by the continents.[21] A "mandala offering"[22] in Tibetan Buddhism is a symbolic offering of the entire universe. Every intricate detail of these mandalas is fixed in the tradition and has specific symbolic meanings, often on more than one level.

The mandala can be shown to represent in visual form the core essence of the Vajrayana teachings. In the mandala, the outer circle of fire usually symbolises wisdom. The ring of 8 charnel grounds[23] represents the Buddhist exhortation to always be mindful of death, and the impermanence with which samsara is suffused: "such locations were utilized in order to confront and to realize the transient nature of life."[24] Described elsewhere: "within a flaming rainbow nimbus and encircled by a black ring of dorjes, the major outer ring depicts the eight great charnel grounds, to emphasize the dangerous nature of human life."[25] Inside these rings lie the walls of the mandala palace itself, specifically a place populated by deities and Buddhas.

One well-known type of mandala, in Japan is the mandala of the "Five Buddhas", archetypal Buddha forms embodying various aspects of enlightenment. Such Buddhas are depicted depending on the school of Buddhism, and even the specific purpose of the mandala. A common mandala of this type is that of the Five Wisdom Buddhas (a.k.a. Five Jinas), the Buddhas Vairocana, Aksobhya, Ratnasambhava, Amitabha and Amoghasiddhi. When paired with another mandala depicting the Five Wisdom Kings, this forms the Mandala of the Two Realms.

Whereas the above mandala represents the pure surroundings of a Buddha, this mandala represents the universe. This type of mandala is used for the mandala-offerings, during which one symbolically offers the universe to the Buddhas or to one's teacher. Within Vajrayana practice, 100,000 of these mandala offerings (to create merit) can be part of the preliminary practices before a student even begins actual tantric practices.[26] This mandala is generally structured according to the model of the universe as taught in a Buddhist classic text the Abhidharma-kośa, with Mount Meru at the centre, surrounded by the continents, oceans and mountains, etc.