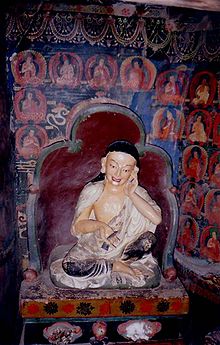 Jetsun Milarepa (Tibetan: རྗེ་བཙུན་མི་ལ་རས་པ, Wylie: Rje-btsun Mi-la-ras-pa), (c. 1052—c. 1135 CE) is generally considered one of Tibet's most famous yogis and poets. He was a student of Marpa Lotsawa, and a major figure in the history of the Kagyu (Bka'-brgyud) school of Tibetan Buddhism.

Born in the village of Kya Ngatsa - also known as Tsa - in Gungthang province of western Tibet to a prosperous family he was named Mila Thöpaga (Thos-pa-dga'), which means "A joy to hear." His family name, Josay indicates noble descent, a sept of the Khyungpo or eagle clan.[1] When his father died, Milarepa's uncle and aunt took all of the family's wealth. At his mother's request, Milarepa left home and studied sorcery. While his aunt and uncle were having a party to celebrate the impending marriage of their son, he took his revenge by summoning a giant hail storm to demolish their house, killing 35 people, although the uncle and aunt are supposed to have survived. The villagers were angry and set off to look for Milarepa, but his mother got word to him and he sent a hailstorm to destroy their crops.

Many of Milarepa's deeds took place in Chokyi Dronma's homeland and his life and songs were compiled by Tsangnyon Heruka, sponsored by Chokyi Dronma's brother, the Gungthang king Thri Namgyal De.[2]

Milarepa later lamented his evil ways in his older years: "In my youth I committed black deeds. In maturity I practiced innocence. Now, released from both good and evil, I have destroyed the root of karmic action and shall have no reason for action in the future. To say more than this would only cause weeping and laughter. What good would it do to tell you? I am an old man. Leave me in peace."[3]

According to the book Magic and Mystery in Tibet by French explorer Alexandra David-Néel, Milarepa boasted of having “crossed in a few days, a distance which, before his training in black magic, had taken him more than a month. He ascribes his gift to the clever control of ‘internal air’.” David-Néel comments “that at the house of the lama who taught him black magic there lived a trapa [monk] who was fleeter than a horse” using the same skill.[4]

This esoteric skill, which is known as Lung-gom-pa ("Wind Meditation", lung = “wind,[5] gom-pa = “meditation”[6]) in Tibet, allows a practitioner to run at an extraordinary speed for days without stopping. This technique could be compared to that practiced by the Kaihigyo Monks of Mt. Hiei in Kyoto, Japan.[7]

Knowing that his revenge was wrong, Milarepa set out to find a lama and was led to Marpa the translator. Marpa proved a hard taskmaster. Before Marpa would teach Milarepa he had him build and then demolish three towers in turn. When Marpa still refused to teach Milarepa he went to Marpa's wife, who took pity on him. She forged a letter of introduction to another teacher, Lama Ngogdun Chudor, under whose tutelage he practised meditation. However when he was making no progress, he confessed the forgery and Ngogdun Chudor said that it was vain to hope for spiritual growth without the guru Marpa's approval. Milarepa returned to Marpa, and after practicing very diligently for twelve years Milarepa attained the state of Vajradhara (complete enlightenment). He is said to be the first to achieve this state within one lifetime. He then became known as Milarepa, which means the "Mila, the cotton clad one" (the suffix "repa" is given to many tantric yogis since they wear white robes) At the age of forty-five, he started to practice at Drakar Taso (White Rock Horse Tooth) cave - 'Milarepa's Cave', as well as becoming a wandering teacher. Here, he subsisted on nettle tea, leading his skin to turn green, hence the greenish color he is often depicted as having in paintings and sculpture.

Pyenzhangling Monastery, also known as Pelgye Ling Gompa, is a small Tibetan Buddhist monastery in a tiny village called Zhonggang, Tibet that is consecrated to Milarepa. It is built around the cave where he once lived. "It was destroyed but has now been rebuilt and decorated by Nepali artisans. This is one of many caves associated with Milarepa between Langtang and Jomolungma."[8] 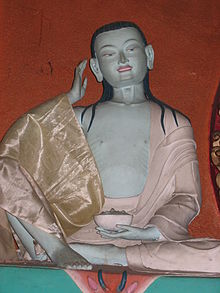 A statue of Milarepa from the Milarepa Gompa, Halambu valley, Nepal.

Milarepa is famous for many of his songs and poems, in which he expresses the profundity of his realization of the dharma. He also had many disciples, male and female,[9][10] including Rechung Dorje Drakpa (Ras-chung Rdo-rje Grags-pa) and Gampopa (Sgam-po-pa, Dhakpo Lhaje). His female disciples include Rechungma, Padarbum, Sahle Aui and Tsheringma.[11] It was Gampopa who became Milarepa's spiritual successor, continued his lineage, and became one of the main lineage masters in Milarepa's tradition. 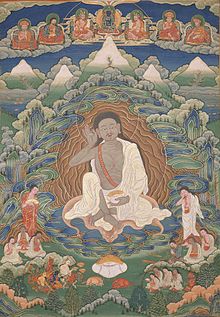