This page is about the architectural term. See also: eye. 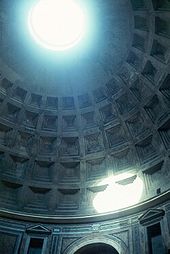 The Oculus (top) in the dome of the Pantheon, Rome

An Oculus, circular window, or rain-hole is a feature of Classical architecture since the 16th century. They are often denoted by their French name, oeil de boeuf, or "bull's-eye". Such circular or oval windows express the presence of a mezzanine on a building's façade without competing for attention with the major fenestration. Circular windows set in dormers have been a feature of French Classical architecture since the beginning of the seventeenth century. For structural reasons, they are also found as the portholes of ships.

Oculus (plural oculi) is the Latin word for eye,[1] and the word remains in use in certain contexts, as the name of the round opening in the top of the dome of the Pantheon in Rome,[2] and in reference to other round windows, openings, and skylights.

The Oculus in the Pantheon has always been open to the weather, allowing rain to enter and fall to the floor, where it is carried away through drains. In the picture, right, sunlight streams through the opening and strikes the lower part of the dome. The bright opening and the surrounding smooth concrete above the coffering resembles an eye, giving the opening its name.

In archaeology, oculus is the name given to a motif found in western European prehistoric art. It consists of a pair of circular or spiral marks, often interpreted as eyes, and appears on pottery, statues and megaliths. The oculus motif may represent the watchful gaze of a god or goddess and was especially common during the Neolithic period.