Chöd (Tibetan: གཅོད, Wylie: gcod lit. 'to sever'[1]), is a spiritual practice found primarily in Tibetan Buddhism. Also known as "Cutting Through the Ego,"[2] the practice is based on the Prajñāpāramitā sutra. It combines prajñāpāramitā philosophy with specific meditation methods and a tantric ritual.

A form of Chöd was practiced in India by Buddhist mahāsiddhas, prior to the 10th Century.[4] However, Chöd as practised today developed from the entwined traditions of the early Indian tantric practices transmitted to Tibet and the Bonpo[citation needed] and Tibetan Buddhist Vajrayāna[citation needed] lineages. Besides the Bonpo, there are two main Tibetan Buddhist Chöd traditions, the "Mother" and "Father" lineages. In Tibetan tradition, Dampa Sangye is known as the Father of Chöd and Machig Labdron, founder of the Mahāmudra Chöd lineages, as the Mother of Chöd. Chöd developed outside the monastic system. It was subsequently adopted by the four main schools of Tibetan Buddhism.

The Chöd, as an internalization of an outer ritual, involves a form of self-sacrifice[5]: the practitioner visualizes their own body as the offering at a ganachakra or tantric feast. The purpose of the practice is to engender a sense of victory and fearlessness.[citation needed] These two qualities are represented iconographically by the dhvaja, or victory banner and the kartika, or ritual knife. The banner symbolizes overcoming obstacles and the knife symbolizes cutting through the ego. Since fearful or painful situations help the practitioner's work of cutting through attachment to the self, such situations may be cultivated.[6] Machig Labdrön said: "To consider adversity as a friend is the instruction of Chöd".[4]

"ཀུ་སུ་ལུ་པ ku-su-lu-pa ¿ is a word of Tantrik mysticism, its proper Tibetan equivalent being གཅོད་པ gcod-pa, the art of exorcism. The mystic Tantrik rites of the Avadhauts, called Avadhūtipa in Tibet, exist in India."[7]

NB: ¿ = kusulu or kusulupa (Sanskrit; Tibetan loanword) that is studying texts rarely whilst focusing on meditation and praxis. Often used disparagingly by pandits.

Avadhūtas, or 'mad saints,' are well known for their 'crazy wisdom.' Chöd practitioners (chödpas) are a type of avadhūta particularly respected, detested, feared or held in awe due to their role as denizens of the charnel ground. Edou says they were often associated with the role of shaman and exorcist:

"The Chö[d]pa's very lifestyle on the fringe of society - dwelling in the solitude of burial grounds and haunted places, added to the mad behavior and contact with the world of darkness and mystery - was enough for credulous people to view the Chödpa in a role usually attributed to shamans and other exorcists, an assimilation which also happened to medieval European shepherds. Only someone who has visited one of Tibet's charnel fields and witnessed the offering of a corpse to the vultures may be able to understand the full impact of what the Chöd tradition refers to as places that inspire terror."[8] 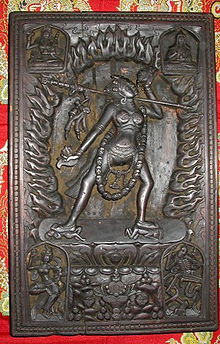 Tibetan Board Carving of Vajrayogini Dakini

In Chöd, the adept symbolically offers the flesh of their body in a form of gaṇacakra or tantric feast. Iconographicallyally, the skin of the practitioner's body may represent surface reality or maya. It is cut from bones that represent the true reality of the mindstream. Some commentators see the Chöd ritual as cognate with the prototypical initiation of a shaman.[citation needed] Traditionally, Chöd is regarded as challenging, potentially dangerous and inappropriate for some practitioners.[9]

Practitioners of the Chöd ritual, Chödpa, use a kangling or human thighbone trumpet, and a Chöd drum, a hand drum similar to but larger than the ḍamaru commonly used in Tibetan ritual. In a version of the Chöd sādhana of Jigme Lingpa from the Longchen Nyingthig terma, five ritual knives (phurbas), are employed to demarcate the maṇḍala of the offering and to affix the five wisdoms.[10]

Key to the iconography of Chöd is the hooked knife or skin flail (kartika). A flail is an agricultural tool used for threshing to separate grains from their husks. Similarly, the kartika symbolically separates the bodymind from the mindstream.[11] The kartika imagery in the Chöd ritual provides the practitioner with an opportunity to realize Buddhist doctrine:

The Kartika (Skt.) or curved knife symbolizes the cutting of conventional wisdom by the ultimate insight into emptiness. It is usually present as a pair, together with the skullcup, filled with wisdom nectar. On a more simple level, the skull is a reminder of (our) impermanence. Between the knife and the handle is a makara-head, a mythical monster.[12]

A recurrent theme in the iconography of the Tibetan Buddhist tantras is a group of five or six bone ornaments[13] ornamenting the bodies of various enlightened beings who appear in the texts. The Sanskrit includes the term mudrā, meaning "seal".[14] The Hevajra tantra associates the bone ornaments directly with the five wisdoms, which also appear as the Five Dhyani Buddhas. These are explained in a commentary to the Hevajra tantra by Jamgön Kongtrul:[15]

Origins of the practice

Sources such as Stephen Beyer have described Machig Labdrön as the founder of the practice of Chöd.[29] This is accurate in that she is the founder of the Tibetan Buddhist Mahamudrā Chöd lineages. Machig Labdrön is credited with providing the name "Chöd" and developing unique approaches to the practice.[30] Biographies suggest it was transmitted to her via sources of the mahāsiddha and Tantric traditions.[4] She did not found the Dzogchen lineages, although they do recognize her, and she does not appear at all in the Bön Chöd lineages.[4] Among the formative influences on Mahamudrā Chöd was Dampa Sangye's 'Pacification of Suffering'.[31]

The transmission of Chöd to Tibet

There are several hagiographic accounts of how Chöd came to Tibet.[4] One spiritual biography[32] asserts that shortly after Kamalaśīla won his famous debate with Moheyan as to whether Tibet should adopt the "sudden" route to enlightenment or his "gradual" route, Kamalaśīla used the technique of phowa, transferring his mindstream to animate a corpse polluted with contagion in order to safely move the hazard it presented. As the mindstream of Kamalaśīla was otherwise engaged, a mahasiddha by the name of Padampa Sangye came across the vacant "physical basis"[33] of Kamalaśīla. Padampa Sangye, was not karmically blessed with an aesthetic corporeal form, and upon finding the very handsome and healthy empty body of Kamalaśīla, which he assumed to be a newly dead fresh corpse, used phowa to transfer his own mindstream into Kamalaśīla's body. Padampa Sangye's mindstream in Kamalaśīla's body continued the ascent to the Himalaya and thereby transmitted the Pacification of Suffering teachings and the Indian form of Chöd which contributed to the Mahamudra Chöd of Machig Labdrön. The mindstream of Kamalaśīla was unable to return to his own body and so was forced to enter the vacant body of Padampa Sangye.[34][35]

Chöd was a marginal and peripheral sādhana, practiced outside traditional Tibetan Buddhist and Indian Tantric institutions with a contraindication as caveat of praxis upon all but the most advanced practitioners. Edou[36] foregrounds the textual exclusivity and rarity of the early tradition. Indeed, due to the itinerant and nomadic lifestyles of practitioners, they could carry few texts. Hence they were also known as kusulu or kusulupa: that is, studying texts rarely whilst focusing on meditation and praxis:

The nonconventional attitude of living on the fringe of society kept the Chödpas aloof from the wealthy monastic institutions and printing houses. As a result, the original Chöd texts and commentaries, often copied by hand, never enjoyed any wide circulation, and many have been lost forever.[37]

Rangjung Dorje, 3rd Karmapa Lama, (1284–1339) was a very important systematizer of Chöd teachings and significantly assisted in their promulgation within the literary and practice lineages of the Kagyu, Nyingma and particularly Dzogchen. It is in this transition from the outer charnel ground to the institutions of Tibetan Buddhism that the rite of the Chöd becomes more imaginal, an inner practice, that is, the charnel ground becomes an internal imaginal environment. Schaeffer[38] conveys that the Third Karmapa was a systematizer of the Chöd developed by Machig Labdrön and lists a number of his works on Chöd consisting of redactions, outlines and commentaries amongst others:

Key elements of the Practice

Chöd literally means "cutting through". It cuts through hindrances and obscuration, sometimes called 'demons' or 'gods'. Examples of demons are ignorance, anger and, in particular, the dualism of perceiving the self as inherently meaningful, contrary to the Buddhist doctrine of no-self.[40] The practitioner is fully immersed in the ritual: "With a stunning array of visualizations, song, music, and prayer, it engages every aspect of one’s being and effects a powerful transformation of the interior landscape."[41]

Chöd usually commences with phowa in which the practitioner visualises their mindstream as the five pure lights leaving the body through the aperture of the sahasrara at the top of the head. This is said to ensure psychic integrity of, and compassion for the practitioner of the rite (sādhaka).[citation needed] In most versions of the sādhana, the mindstream precipitates into a tulpa simulacrum of the dākinī Vajrayoginī. In the body of enjoyment[44] attained through visualization, the sādhaka offers the ganacakra of their own physical body, to the 'four' guests: Triratna, ḍākiṇīs, dharmapalas, beings of the bhavachakra, the ever present genius loci and pretas. The rite may be protracted with separate offerings to each maṇḍala of guests, or significantly abridged. Many variations of the sādhana still exist.[45]

Chöd, like all tantric systems, has outer, inner and secret aspects. They are described in an evocation sung to Nyama Paldabum by Milarepa:

The Chöd is now a staple of the advanced sādhana of Tibetan Buddhist traditions. It is practiced worldwide following dissemination by the Tibetan diaspora.

Chöd was mostly practised outside the Tibetan monastery system by chödpas, who were yogis, yogiṇīs and ngagpas rather than bhikṣus and bhikṣuṇīs. Because of this, material on Chöd has been less widely available to Western readers than some other tantric Buddhist practices. The first Western reports of Chöd came from a French adventurer who lived in Tibet, Alexandra David-Néel in her travelogue Magic and Mystery in Tibet, published in 1932. Walter Evans-Wentz published the first translation of a Chöd liturgy in his 1935 book Tibetan Yoga and Secret Doctrines. Anila Rinchen Palmo translated several essays about Chöd in the 1987 collection Cutting Through Ego-Clinging.[citation needed] Giacomella Orofino's piece entitled "The Great Wisdom Mother" was included in Tantra in Practice in 2000 and in addition she published articles on Machig Labdrön in Italian.[46]