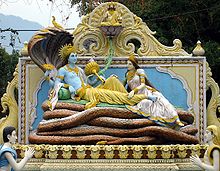 Lakshmi with Vishnu-Narayana at Vaikuntha

Narayana (Sanskrit: नारायण; nārāyaṇa;Kannada: ನಾರಾಯಣ;Telugu: నారాయణ;Tamil: நாராயணன்) or Narayan or Naraina is an important Sanskrit name for Vishnu, and in many contemporary vernaculars a common Indian name. Narayana is also identified as the original man, Purusha. The Puranas present divergent views on Narayana. In the Kurma Purana he is identified with Brahman and Krishna-Vishnu.[1]

In the Mahabharata Krishna is often referred to as Narayana and Arjuna as Nara.[2] The epic identifies them both in plural 'Krishnas', or as part incarnations of the earlier incarnations of Vishnu, recalling their mystical identity as Nara-Narayana.[3]

Narayana is spoken of in the scriptures as being 'parabrahman', 'paramatma' and 'parameshwar' which are all ways of saying "absolute" or "supreme" God/Lord/Soul. In the Vedas it is written that that "Narayana parabrahman tatvam Narayana paraha |", which points to the how Narayana is essentially the supreme force and/or essence of all.

Antar Vahisca Sarvam vyapta Narayana stitaha means inside and out Narayana is pervaded through out the universe both spritual and material universes. He resides at the eternal blissful Vaikuntha planet, which is situated at Sweta dwipa, he is also called Vaikuntha nathan and kheerabdhi nathan means the lord of milk ocean, he plays his divine past times with his consort Laxmi and other liberated souls. He never leaves milk ocean but his power works through out the universe as it says in Upanisada Om purna midam purnat purna muduchyate means he is the complete whole,even though everything comes from him, he is still the complete.

In Sanskrit, another name for water is ‘Naara’. The Supreme Lord Vishnu whose resting place ('Ayana') is ‘Naara’ is therefore called Naarayana. "Naara" also means the living entities (Jivas). Therefore, another meaning of Naarayana is 'resting place for all living entities'. The close association of Narayana with water explains the frequent depiction of Narayana in Hindu art as standing or sitting on an ocean. Another important translation of Narayana is "The Supreme Being who is the foundation of all men".[4]

Another interpretation of the word Narayana sees Nara meaning "human" and Ayana as "direction/goal". Some view Narayana as meaning "son of man." Hence Narayana refers to the "direction of a human" (or the one that helps a human to his/her goal, i.e. towards moksha). Nara is related to moksha as both are rooted to the Water element (Ap), one of the Great Elements (Mahābhūta). (See also Tattva).

Actually, Lord Narayan is the supreme almighty, everything emnates from Him. In the Yajurveda it says, 'Om adha nitya Narayan ha, brahma narayanaha, shivasca narayana ha, shankarsca narayanaha and kalacha narayanaha, sarva bhutasca mekam via narayana Karan purusha makarana parabramahan' and ultimately it says 'Savo deve eko Narayana na dwitiyacha kaschit' ("There is only one God Narayana and no second"). He Himself expands as Brahma the creator (Generator), Vishnu the maintainer (Operator) and Shiva as the annihilator (Destroyer)-GOD. Whether you read Rig Veda or any other Vedas and Puranas it has said Lord Narayan is the supreme and there is absolutely nothing beyond Him, it says in Srimad Bhagavatam 'Yesha tu Narayanam devam adevam isham' ('Narayan is the lord of the lords beyond him there is nothing exists'). Whoever worships with love and devotion achieves the highest destination Vaikuntha. (G as Generator, O as Operator and D as Destroyer hence GOD)

Narayana expands as second caturvyuha (first is expanded from Balarama/Baladeva). He is in center of Narayanaloka (Vaikunthaloka), and around Him are four Personalities of Godhead. This caturvyuha is following:

|- |Narayana resides in Vaikuntha
on planets called Vaikunthaloka |One of two Sankarshanas of two caturvyuhas (one from Baladeva, the second from Narayana) |MahaVishnu is lying on
Karana Ocean and breathing
and many material universes manifest |Garbhodakashayi Vishnu enters into
every material universe
(Brahmanda) |Kshirodakasayi Vishnu is
in everyone's heart,
in every atom,
and on Milk ocean |All material universes rest
on hoods of Ananta/Shesha |} From navel of Garbhodakashayi-Vishnu lotus sprouts out, where Brahma is born. But this Brahmaloka is temporary, while Brahmalokah sanatana, planets of Supreme Personality of Godhead (here called as Brahman) are eternal - Vaikuntha planets, planets in spiritual world.

Narayana expanded Himself into caturvyuha, and that caturvyuha also expands into many other personalities of Godhead with four hands. According to position of attributes (weapons etc.) in their hands, They have different names. They hold conch-shell, club, lotus flower, sudarshana cakra in their hands in different /to be expanded/.

These four personalities - Sankarshana, Aniruddha, Vasudeva, Pradyumna – expand themselves two times. One time - as two personalities of Godhead each (4*2), and another time - three Personalities of Godhead each (4*3). The last twelve also rule twelve months of calendar (aside from demigods which also rule 12 months in material world). So total there are 24 Personalities of Godhead, and They all expand from Narayana. There are many other planets in Vaikuntha, spiritual world, and all those planets are inhabited. Still, it is said that there is the possibility of falling away even from Vaikuntha, so one is advised to go to Goloka Vrindavana, from where there is no return. This is not usually accepted by other four Vaisnava sampradayas, but only in sampradaya which goes from Sri Caitasnya Mahaprabhu. But every Vaisnava samparadaya of their number of 5 (or four, if to say that Caitanya Sampradaya also is in Brahma sampradaya) accept that Narayana expands as caturvyuha, and from Sankarsana here comes Mahavishnu and other Personalities of Godhead - Paramatma. Controversies are encouraged to discuss so this only makes faith in Bhagavan (Vishnu, Krishna, Narayana) stronger.

Actually Narayana is not an expansion of Krishna, according to Srimad Bhagavat mahapuran, Krishna is expansion of Lord Narayana, all the incarnations including Rama, Krishna and Narshima including 21 incarnations are kala, meaning partial expansion of Narayanas universal form, written in first canto of Srimad Bhagavatam It is mentioned in Srimad Bhagavatam Lord Narayana appeared on earth in satya yuga as Nara Narayana and later in dwapar yuga that Nara became Arjun and Narayana became Krishna. So how can one say Narayana is an expansion of Krishna, this is not Vedic knowledge rather some sentiments and so called gurus and devotees write their own imaginations, therefore one should always follow the Vedas. It is clearly stated in Yajur Vedas that 'savo deve eko Narayana na dwitiyacha kaschit', meaning there is only one Narayana no other second.

A verse that confers the Devas' subordinate status comes from the Vishnu sahasranama, whose concluding verses state: "The Rishis (great sages), ancestors, the Devas, the great elements, in fact, all things moving and unmoving constituting this universe have originated from Narayana." This verse indicates that the Devas are subordinate to Vishnu, but Vishnu is often named a Deva. (Vasudeva, Narasimhadeva, etc.)

Rarity of devotees of Narayana