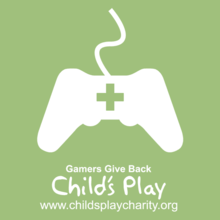 Child's Play is a charitable organization founded by the authors of the popular computer and video games-based webcomic Penny Arcade that organizes worldwide toy drives to children's hospitals. Mike Krahulik and Jerry Holkins founded Child's Play in 2003 to improve the lives of sick children by donating toys and games to hospitals worldwide. The charity is also seen as a way to refute mainstream media's perception of gamers as violent and antisocial.[1] Through Child's Play, donors have sent almost nine million dollars in toys, games and books to children's hospitals all over the world.[2]

With the help of hospital staff, Child's Play volunteers set up gift wishlists on Amazon.com, full of video games, books, toys, and movies. When the hospital's wishlist is completed, they are then added to the map on the Child's Play website. Gamers and others online click through to the lists and buy items for patients. Everything ships directly from Amazon to the hospital. The Amazon links are associate's links, so Amazon pays Child's Play a small commission on each purchase. 100% of that money goes to the hospitals. Instead of buying items off the wishlists users can donate money through PayPal or check. Again, 100% of all donations are distributed to the hospitals, paying for pediatric research, facility improvements, etc. During the month of October, the webmasters of Penny Arcade make a big kickoff announcement, which then gets spread by the online community through blog posts, news links, and forum avatars.

The charity also has a space for corporate sponsors who have donated gifts, cash, or traffic. The sponsors also earn a corporate sponsorship level (Silver, Gold and Platinum) and get linked back on both Penny-Arcade.com and Childsplaycharity.org. These sponsors include several video game marathons such as the Mario Marathon and Desert Bus for Hope.[citation needed]

Child's Play was announced on November 24, 2003 by the authors of Penny Arcade as a challenge to their readership, and as a response to the often negative portrayal of video gamers in the media, most notably a HeraldNet article by Bill France entitled "Violent video games are training children to kill."[3] (He later made an apology in the same column and praised the effort.[4]) It received positive press on many popular weblogs, including Slashdot and received direct endorsement from Wil Wheaton. In less than one month of publicity and operation, the charity raised over $250,000 in cash and toys for the Children's Hospital and Regional Medical Center in Seattle, Washington.[5]

In 2004, the charity was expanded and partnered with children's hospitals in Seattle; Oakland, California; San Diego, California; Houston, Texas and Washington, D.C.[6]

By January 5, 2005, when the final numbers for 2004 were tabulated, the charity had raised over $310,000 ($60,000 more than the previous year), and gained forty corporate sponsors in the process. Among these sponsors were Nintendo, Midway Games, Cerulean Studios, and THQ.

In 2005, the charity was again expanded to partner with an additional seven children's hospitals across the United States, as well as children's hospitals in Toronto and Halifax, Nova Scotia, Canada. It is also partnered with Alder Hey Children's Hospital in Liverpool, England. At the time when they stopped accepting donations, the community had raised $605,000.[7] There was an auction to appear in a Penny Arcade comic strip at the 2005 Child's Play Charity Dinner. The winning bid of $20,000 was placed by Christian Boggs.[8][9] Mr. Boggs also placed the winning bid on an original pencil sketch of the PAX 2005 program cover on eBay. 100% of the profits went to the American Red Cross.

In 2006, the charity was further expanded, adding four hospitals in the United States, two in Australia, and one in Egypt. In addition to this, on December 13, 2006 there was a charity dinner and auction, where items participants were able to bid on included a gaming day for four in the Penny Arcade office, an appearance in a Penny Arcade strip, a tour of Bungie and recording session for the voice of a character in Halo 3, and a two year subscription to World of Warcraft and the Burning Crusade special edition signed by all the developers. The year 2006 also became the first time that the 1 million dollar mark was reached.

In 2007, the charity added a hospital each in Hawaii and New Zealand.

During 2008 Penny Arcade Expo, Harmonix announced that three songs from the Expo will be made available for download for the Rock Band video game. The proceeds of these three songs will go to the charity. [10]

In 2010, Epic Games held a vote-by-purchase event between July 29 and September 6 to determine the fate of a character, Clayton Carmine, in their upcoming game Gears of War 3. Gamers voted by purchasing Xbox avatar T-Shirts through Xbox live, or real life t-shirts at the San Diego Comic-Con, with all purchases counting towards the vote.[12] The voting campaign raised over $150,000, all of which was donated to Child's Play.[13]

In 2011 Mike Krahulik announced the first annual Child's Play Invitational Golf Tournament to be held at the Brookside Golf Course in Pasadena, California on June 5, 2011. All proceeds from the event go to the partner hospitals & facilities in the Child's Play network.[14]