Yantai (Chinese: 烟台; pinyin: Yāntái) is a prefecture-level city in northeastern Shandong province, People's Republic of China. Located on the southern coast of the Bohai Sea and the eastern coast of the Laizhou Bay, Yantai borders the cities of Qingdao and Weihai to the southwest and east respectively.

The largest fishing seaport in Shandong and a robust economic center today, Yantai used to be known to the West as Chefoo, a misnomer which refers, in Chinese, solely to Zhifu Island, which is historically governed by Yantai.

The contemporary name of Yantai came from the watchtowers constructed on Mount Qi in 1398, during the reign of the Hongwu Emperor, founding emperor of the Ming Dynasty (yan—smoke; tai—tower). The towers served to raise alarms against invasions of Japanese pirates.

These are further divided into 148 township-level divisions, including 94 towns, 6 townships and 48 subdistricts.

The region was inhabited by the non-Han people of the Eastern Yi (東夷), who were believed to have established a small state during the Xia Dynasty on the site of present-day Laizhou City. It became a feudal state called Lai (萊國) until the Warring States Period, when it was annexed by the State of Qi. During the Qin Dynasty, Yantai belonged to the Qi Prefecture, later renamed Donglai Prefecture (東萊郡) during the Han Dynasty. The area was known as the Donglai Kingdom during the Jin Dynasty (265-420) but later returned to prefecture status (first jùn, then zhōu). In the Tang Dynasty and following it was known as the Teng-chou prefecture, part of Henan Circuit. Next, the city became the Laizhou Subprefecture (萊州府) and, eventually, the Dengzhou Subprefecture (登州府) in the time of the Qing Dynasty.

A Qing Dynasty postage stamp from Yantai, then known as Chefoo

In July 1858 the Chinese empire signed the Treaty of Tianjin and Dengzhou was renamed for the last time. Yantai opened its harbor for business in May 1861, but was not officially designated an international trading port until later that year on August 22. This decree was accompanied by the construction of the Donghai Pass (東海關). 17 nations, including Britain, established embassies in Yantai. The Chefoo Convention was signed there in 1876.

Yantai literally means "smoky tower". In the Ming Dynasty, locals used wolf dung to light fires (Langyan) to warn the whole village of approaching Japanese Pirates (Wokou). The city was nothing but a small fishing village until the late 19th century when it became a treaty port for the British, handed over by the falling Qing Dynasty, which had been defeated in the Opium War. Then with the Germans' power over the whole Shandong peninsula in early 20th century, Yantai was also controlled by Germans for about 20 years. After the Germans were defeated by Allied forces in World War I, Qingdao and Yantai were handed over to the Japanese. After Japan's defeat by the Americans in WW2 they turned Yantai into a summer station for their entire Asian fleet. Then the Japanese set up a trading establishment in the town. You may be able to get an idea of the different influences at the western style Yantai Museum, which used to be a guild hall. However, the colourful history has not left a distinctive architectural mark, there has never been a foreign concession, and though you will see an occasional nineteenth-century grand European building, most of the town is of much more recent origin. After liberation, the town's name was changed from the original, Chefoo, to Yantai and was opened to the world as an ice-free trade port in 1984.

On November 12, 1911, the eastern division of Tongmeng Hui declared itself a part of the revolutionary movement. The next day, it established the Shandong Military Government (山東軍政府) and, the day after that, renamed itself the Yantai Division of the Shandong Military Government (山東煙台軍政分府). In 1914, Jiaodong Circuit (膠東道) was established with Yantai as the capital. Jiaodong Circuit was renamed Donghai Circuit (東海道) in 1925. On January 19, 1938, Yantai participated as part of an anti-Japanese revolutionary committee.

After the creation of the People's Republic of China, in 1950, Yantai was officially awarded city status with the outer lying towns of Laiyang and Wendeng (文登) tacked on as "Special Regions" (专区). Wendeng was merged into Laiyang six years later, and this larger Laiyang Special Region was combined with Yantai City to become simply Yantai Region (烟台地区). Yantai is of strategic importance to Chinese defence as it and the city of Dalian are primary coastal guard points for Beijing. In November 1983, the region became a prefecture-level city. Since then, Yantai has worked its way into becoming a modernized economic center in Shandong Province. 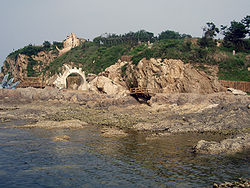 Yantai Region is located north-central on the Shandong Peninsula, south of the Bohai Sea, and parallel to the southern tip of Korea. It has a coast line of 909 km. The topographical breakdown consists of:

There are 121 rivers over 5 kilometer in length, the largest being:

Only Qixia County is located entirely inland, all other county-level entities are coastal, with Changdao consisting entirely of islands.

The annual mean temperature in Yantai is 12 oC. The annual rainfall is 620 mm.

Yantai is currently the second largest industrial city in Shandong, next only to Qingdao. However, the region's largest industry is agriculture. It is famous throughout China for a particular variety of apple and is home to the country's largest and oldest grape winery (Changyu).

The county-level city of Longkou is well known throughout China for its production of cellophane noodles.

Yantai Economic and Technological Development Area is one of the earliest approved state level economic development zones in China. It now has planned area of 10 square kilometers and a population of 115,000. It lies on the tip of the Shandong Peninsula facing the Huanghai Sea. It adjoins to downtown Yantai, merely 6 kilometers away from Yantai Port, 6 kilometers away from Yantai Railway Station, and a 30-minute drive to Yantai International Airport.[1]

Yantai Export Processing Zone (YTEPZ) is one of the first 15 export processing zones approved by the State Council. The total construction area of YTEPZ is 4.17 m2, in which the initial zone covers 3 km2. After developing for several years, YTEPZ is completely constructed. At present, the infrastructure has been completed, standard workshops of 120,000 m2 and bonded warehouses of 40,000 m2 have been built up. Up to now, owning perfect investment environment and conditions, YTEPZ has attracted investors both from foreign countries and regions such as Japan, Korea, Singapore, Hong Kong, Taiwan, Sweden, USA, Canada, etc. and from the domestic to invest and operate in the zone.[2]

The following are a list of prominent Yantai higher education institutions.

The Yantai Laishan International Airport provides scheduled flights to major airports in China as well as Seoul, Osaka and Hong Kong. The other airport, that will replace Laishan in 2014, is Yantai Chaoshui.[3] 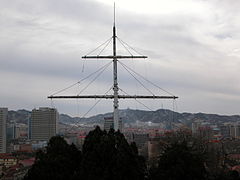 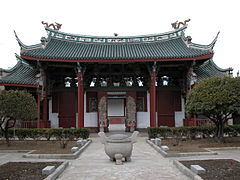 Temple of the Sea Goddess

Because of its fair weather and extensive coasts Yantai is a popular summer retreat. Like many other cities in China, Yantai has improved and upgraded many tourist sites targeted at both national and international tourists. An example of these improvements is the remodeling of the beach area to better accommodate patrons. It is also home to Asia's first bowling alley, which is located on the fourth floor of Parksons department store. There is also the haunted house , a highly exhilarating tourist attraction.

Penglai City's Dan Cliffs (丹崖) is said to be the departure point of the Eight Immortals on their trip to the Conference of the Magical Peach.

Yantai is twinned with:

Yantai is a sister city of the following area.