A similar term is "National Congress", which is a less common translation of People's Political Consultative Conference.

The National People's Congress (simplified Chinese: 全国人民代表大会; traditional Chinese: 全國人民代表大會; pinyin: Quánguó Rénmín Dàibiǎo Dàhuì; literally "National People's Representatives Congress"), abbreviated NPC (Chinese: 人大; pinyin: Rén-Dà), is the highest state body and the only legislative house in the People's Republic of China. The National People's Congress is held in the Great Hall of the People, Beijing, capital of the People's Republic of China; with 2,987 members, it is the largest parliament in the world[1]. The NPC gathers each year along with the People's Political Consultative Conference (CPPCC) whose members represent various defined groups of society. NPC and CPPCC together are often called the Lianghui (Two Meetings), making important national level political decisions.

Although the membership of the NPC is still largely determined by the Communist Party of China, since the early 1990s it has moved away from its previous role as a symbolic but powerless rubber-stamp legislature, and has become a forum for mediating policy differences between different parts of the Party, the government, and groups of society. For the NPC to formally defeat a proposal put before it is a rare, but not non-existent event. However, the BBC still describes the NPC as a rubber-stamp for party decisions,[2] and has testimony from a member of the NPC, Hu Xiaoyan, that she has no power to help her constituents. She was quoted as saying, "As a parliamentary representative, I don't have any real power."[3] 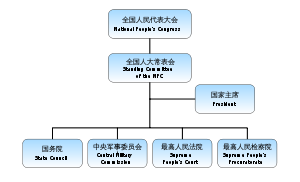 The position of the NPC in the State organs.

The NPC has a collection of functions and powers, including electing the President of the People's Republic of China and approving the appointment of the Premier of the State Council as well as approving the work reports of top officials. The constitution of the National People's Congress provides for most of its power to be exercised on a day-to-day basis by its Standing Committee.

The drafting process of NPC legislation is governed by the Organic Law of the NPC (1982) and the NPC Procedural Rules (1989). It begins with a small group, often of outside experts, who begin a draft. Over time, this draft is considered by larger and larger groups, with an attempt made to maintain consensus at each step of the process. By the time the full NPC or NPCSC meets to consider the legislation, the major substantive elements of the draft legislation have largely been agreed to. However, minor wording changes to the draft are often made at this stage. The process ends with a formal vote by the Standing Committee of the NPC or by the NPC in a plenary session.

In addition, the NPC now functions as a forum in which legislative proposals are drafted and debated with input from different parts of the government and outside technical experts. However, there are a wide range of issues for which there is no consensus within the Party and over which different parts of the party or government have different opinions. Over these issues the NPC has often become a forum for debating ideas and for achieving consensus.

In practice, although the final votes on laws of the NPC often return a high affirmative vote, a great deal of legislative activity occurs in determining the content of the legislation to be voted on. A major bill such as the Securities Law can take years to draft, and a bill sometimes will not be put before a final vote if there is significant opposition to the measure.[4] With respect to proposals by the State Council of the People's Republic of China, the NPC has rejected a bill on maritime safety, and it is no longer uncommon for the State Council to amend or withdraw a bill on account of NPC opposition as with the case of the fuel tax[5][6][7] and the draft food safety law[8] which have been repeatedly blocked by the NPC.

One important constitutional principle which is stated in Article 8 of the Legislation Law of the People's Republic of China is that an action can become a crime only as a consequence of a law passed by the full NPC and that other organs of the Chinese government do not have the power to criminalize activity. This principle was used to overturn police regulations on custody and repatriation and has been used to call into question the legality of re-education through labor. 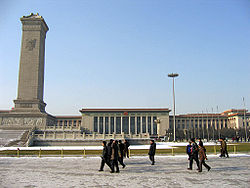 The Great Hall of the People, where the NPC convenes

The NPC meets for about two weeks each year at the same time as the Chinese People's Political Consultative Conference, usually in the Spring. The combined sessions have been known as the two meetings. Between these sessions, power is exercised by the Standing Committee of the National People's Congress which contains about 150 members.

The sessions have become media events because it is at the plenary sessions that the Chinese leadership produces work reports. Although the NPC has thus far never failed to approve a work report or candidate nominated by the Party, these votes are no longer unanimous. It is considered extremely embarrassing for the approval vote to fall below 70%, which occurred several times in the mid-1990s. More recently, work reports have been vetted with NPC delegates beforehand to avoid this embarrassment.

A major bill often takes years to draft, and a bill sometimes will not be put before a final vote if there is significant opposition to the measure. An example of this is the Property Law of the People's Republic of China which was withdrawn from the 2006 legislative agenda after objections that the law did not do enough to protect state property. China's laws are usually submitted for approval after at most three reviews at the NPC Standing Committee. However, the debate of the Property Law has spanned nine years, receiving a record seven reviews at the NPC Standing Committee and stirring hot debates across the country. The long-awaited and highly contested Property Law was finally approved at the Fifth Session of the Tenth National People's Congress (NPC) on March 16. Among the 2,889 deputies attending the closing session, 2,799 voted for it, 52 against it, 37 abstained and one didn't vote.

About 70% of current NPC delegates are members of the Communist Party of China.[9]

A number of delegates to the NPC represent Hong Kong, Macau and Taiwan. The delegates from Hong Kong and Macau are elected via an electoral college rather than by popular vote, but do include significant political figures who are residing in the regions.[11] The electoral colleges which elect Hong Kong and Macau NPC members are largely similar in composition to the bodies which elect the chief executives of those regions. The current method of electing SAR delegations began after the handovers of sovereignty to the PRC. Between 1975 and the handovers, both Hong Kong and Macau were represented by delegations elected by the Guangdong Provincial Congress.

The Taiwan delegation is intended to be symbolic of the PRC's claim over the island, but does not include anyone currently residing in Taiwan, but rather includes only people living on the mainland with some connection with Taiwan, such as previous residency or ancestry. The Taiwan delegates are increasingly composed of Taiwanese merchants residing on the mainland and overseas Taiwanese who returned to the mainland. Delegates representing Taiwan are elected by a constituency composed of PRC residents who are or were previously domiciled in Taiwan, or who have ancestry in Taiwan.

In addition to these delegations, there are delegations from the People's Liberation Army, who under Chinese law are not considered residents of any region, and a delegation which represents returned overseas Chinese.

Relationship with the Communist Party

The ruling Communist Party of China maintains effective control over the composition of people's congresses at various levels, especially the National People's Congress, through this system. At the local level, there is a considerable amount of decentralization in the candidate preselection process, with room for local in-party politics and for participation by non-Communist Party candidates. The structure of the tiered electoral system makes it difficult for a candidate to become a member of the higher level people's assemblies without the support from politicians in the lower tier, while at the same time making it impossible for the party bureaucracy to completely control the election process.

One such mechanism is the limit on the number of candidates in proportion to the number of seats available. At the national level, for example, a maximum of 110 candidates are allowed per 100 seats; at the provincial level, this ratio is 120 candidates per 100 seats. This ratio increases for each lower level of people's congresses, until the lowest level, the village level, has no limit on the number of candidates for each seat. However, the Congress website says "In an indirect election, the number of candidates should exceed the number to be elected by 20% to 50%." The practice of having more candidates than seats for NPC delegate positions has become standard, and it is different from Soviet practice in which all delegates positions were selected by the Party center. Although the limits on member selection allows the Party leadership to block unacceptable candidates, it also causes unpopular candidates to be removed in the electoral process. Direct and explicit challenges to the rule of the Communist Party of China are not tolerated, but are unlikely due to the control the party center has on delegate selection.

Furthermore, the constitution of the National People's Congress provides for most of its power to be exercised on a day-to-day basis by its Standing Committee. Due to its overwhelming majority in the Congress, the Communist Party has total control over the composition of the Standing Committee, thereby controlling the actions of the National People's Congress.

Although Party approval is in effect essential for membership in the NPC, approximately a third of the seats are by convention reserved for non-Communist Party members. This includes technical experts and members of the smaller allied parties. While these members do provide technical expertise and a somewhat greater diversity of views, they do not function as a political opposition.

The NPC has not always endorsed legislation placed before it. In 1993, the NPC refused to consider constitutional amendments proposed by the Chinese Communist Party on the grounds that non-governmental organizations such as the CCP do not have authority to propose legislation. Also in 1994, the Eighth National People's Congress Standing Committee included "Income and Property Law," in the official legislative plan, but was not able to bring it to a vote due to opposition."[12] Also efforts to impose a national gasoline tax to finance construction of the tollways met with opposition and it has been difficult for both the Communist Party of China and the State Council to pass such a tax through the National People's Congress.