Court system of the People's Republic of China

Court system of the People's Republic of China

The Chinese court system is based on civil law, modeled after the legal systems of Germany and France. 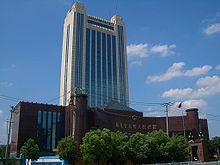 High People's Court of the Province of Hubei

According to the Constitution of the People's Republic of China of 1982 and the Organic Law of the People's Courts that went into effect on January 1, 1980, the Chinese courts are divided into a four-level court system:

The court system is paralleled by a hierarchy of prosecuting offices called people's procuratorates, the highest being the Supreme People's Procuratorate.

History of court structure and process

Between the Anti-Rightist Campaign of 1957 and the legal reforms of 1979, the courts—viewed by the leftists as troublesome and unreliable—played only a small role in the judicial system. Most of their functions were handled by other party or government organs. In 1979, however, the National People's Congress began the process of restoring the judicial system. The world was able to see an early example of this reinstituted system in action in the showcase trial of the Gang of Four and six other members of the "Lin-Jiang clique" from November 1980 to January 1981 (see the Four Modernizations). The trial, which was publicized to show that China had restored a legal system that made all citizens equal before the law, actually appeared to many foreign observers to be more a political than a legal exercise. Nevertheless, it was intended to show that China was committed to restoring a judicial system.

The Ministry of Justice, abolished in 1959, was re-established under the 1979 legal reforms to administer the newly restored judicial system. With the support of local judicial departments and bureaus, the ministry was charged with supervising personnel management, training, and funding for the courts and associated organizations and was given responsibility for overseeing legal research and exchanges with foreign judicial bodies.

The 1980 Organic Law of the People's Courts (revised in 1983) and the 1982 State Constitution established four levels of courts in the general administrative structure. Judges are elected or appointed by people's congresses at the corresponding levels to serve a maximum of two five-year terms. Most trials are administered by a collegial bench made up of one to three judges and three to five assessors. Assessors, according to the State Constitution, are elected by local residents or people's congresses from among citizens over twenty-three years of age with political rights or are appointed by the court for their expertise. Trials are conducted in an inquisitorial manner, in which both judges and assessors play an active part in the questioning of all witnesses. (This contrasts with the adversarial system, in which the judge is meant to be an impartial referee between two contending attorneys.) After the judge and assessors rule on a case, they pass sentence. An aggrieved party can appeal to the next higher court.

The Organic Law of the People's Courts requires that adjudication committees be established for courts at every level. The committees usually are made up of the president, vice presidents, chief judges, and associate chief judges of the court, who are appointed and removed by the standing committees of the people's congresses at the corresponding level. The adjudication committees are charged with reviewing major cases to find errors in determination of facts or application of law and to determine if a chief judge should withdraw from a case. If a case is submitted to the adjudication committee, the court is bound by its decision. The Supreme People's Court stands at the apex of the judicial structure. Located in Beijing, it has jurisdiction over all lower and special courts, for which it serves as the ultimate appellate court. It is directly responsible to the National People's Congress Standing Committee, which elects the court president.

Military courts make up the largest group of special courts and try all treason and espionage cases. Although they are independent of civilian courts and directly subordinate to the Ministry of National Defense, military court decisions are reviewed by the Supreme People's Court. Special military courts were first established in 1954 to protect the special interests of all commanders, political commissars, and soldiers, but they ceased to function during the Cultural Revolution (1966-76). Military courts and procuratorates were reinstituted in October 1978, and open military trials resumed in December of that year.

In April 1986, at the Fourth Session of the Sixth National People's Congress, the General Principles of the Civil Code was approved as "one of China's basic laws." Consisting of more than 150 articles, the code was intended to regulate China's internal and external economic relations to establish a stable base conducive to trade and attractive to foreign investors. Many of its provisions define the legal status of economic entities and the property rights they exercise. The code clearly stipulated that private ownership of the means of production is protected by law and may not be seized or interfered with by any person or organization. It also recognizes partnerships and wholly foreign-owned or joint-venture enterprises.

This article incorporates public domain material from websites or documents of the Library of Congress Country Studies. [1]