Historical GDP of the People's Republic of China

Historical GDP of the People's Republic of China

This article includes a list of China's historical gross domestic product (GDP) values, the market value of all final goods and services produced by a nation in a given year. The GDP dollar estimates presented here are calculated at market or government official exchange rates (nominal) and derived from purchasing power parity (PPP) calculations. This article also includes historical GDP growth.

In 1985, the State Council of China (SCC) approved to establish a SNA (System of National Accounting), use the GDP to measure the national economy. China started the study of theoretical foundation, guiding, and accounting model etc., for establishing a new system of national economic accounting. In 1986, as the first citizen of the People's Republic of China to receive a Ph.D. in economics from an overseas country, Dr. Fengbo Zhang headed Chinese Macroeconomic Research - the key research project of the seventh Five-Year Plan of China, as well as completing and publishing the China GDP data by China's own research. The summary of the above has been included in the book "Chinese Macroeconomic Structure and Policy" (June 1988) edited by Fengbo Zhang, and collectively authored by the Research Center of the SCC. This is the first GDP data which was published by China.

The research utilized the World Bank’s method as a reference, and made the numerous appropriate adjustments based on China’s national condition. The GDP also has been converted to USD based data by utilizing the moving average exchange rate. The research systematically completed China’s GDP and GDP per capita from 1952 to 1986 and analyzed growth rate, the change and contribution rates of each component. The research also included international comparisons. Additionally, the research compared MPS and SNA, looking at the results from the two systems from analyzing Chinese economy. This achievement created the foundation for China GDP research.

The SCC issued “The notice regarding implementation of System of National Accounting” in August 1992, the Western SNA system officially is introduced to China, replaced Soviet Union's MPS system, Western economic indicator GDP became China’s most important economic indicator. Based on Dr. Fengbo Zhang's research, in 1997, the National Bureau of Statistics of China (NBS), in collaboration with Hitotsubashi University of Japan, re-estimated China’s GDP Data from 1952 up to 1995 based on the SNA principal.

When comparing Fengbo Zhang’s GDP measurement in the 1980s and the GDP in 1997 by the NBS and Japan’s cooperative research, the two are found to be very consistent; the deviation rate each year is very slight, between only 0.1% and 7%. During this period, there were many data adjustments, with weighting factors undergoing significant changes along with each years comparable price amendments, statistical method significant changes result in the substantial deviation. Even with science and technology as advanced as it is today, the single item survey is allowed at least ±3%, or a total of 6% deviation. Despite the extremely difficult conditions of a destroyed economy, blank theory, a lack of data, and simple methods in 1980s, there is so little deviation for such a long period of time and the comprehensiveness of the national economic indicator, indicates that the research conducted by Fengbo Zhang with the support of the extensive group he trained is extremely rigorous, and their result very precise. (www.people.com.cn). 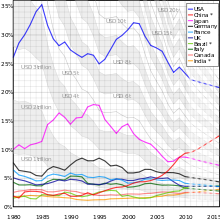 Proportion of world (countries with data) nominal GDP for the countries with the top 10 highest nominal GDP in 2010, from 1980 to 2010 with IMF projections until 2016. Grey lines show actual US dollar values.[1]

As of 2010, China's nominal GDP is worth approximately 40.1 trillion Chinese yuan or 5.93 trillion US dollars, according to China NBS.

China's GDP surpassed that of Italy in 2000, France in 2005, the United Kingdom in 2006 and that of Germany in 2007, before overtaking Japan in 2010, making China the world's second largest economy after the United States.