Electronics industry in the People's Republic of China

Electronics industry in the People's Republic of China

The electronic information industry in China grew rapidly after the liberalization of the economy under the national strategic policy of accelerating the "informatization" of its industrial development.[1]

In 2005, China's electronic information sector made up 16.6% of the country's economic growth and its added-value output formed 7% of the GDP. Manufacturing was the sector that grew the fastest.[2]

As of 2011, China is the world's largest market for personal computers [3]

The added-value base of the Chinese electronic information industry is about 900 billion yuan (approximately US$112 billion). The value added ratio is (amount of value added / total sales x 100%) only 23.4%, compared to the whole national average of 27.1%.[6]

This is evidence for China's role as an assembly base that is dependent upon overseas components and parts, intermediary goods, and capital goods.[7]

China’s software industry – 11% of the electronic information industry – (software products, system integration, software services, and others) growth has been rapid as demonstrated by a growth rate of 40% with sales of 390 billion yuan (approximately US$48.8 billion) as of 2006.

Approved software companies have reached 11,660, increasing by over 1,000 per annum. There are roughly 1 million employees working in China’s software industry. China’s software exports have reached US$35.9 billion in 2005, though this was short of the US$50 billion export goal set forth in the Tenth 5-Year Plan, which ended in 2005. 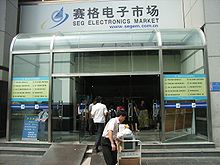 Due to the expansion of the internal and external markets, the ratio of sales to production (sales rate) has remained at over 98%.

The vast majority of China's mobile phones, notebook computers, color displays and other products are exported, making China a global production base.

Additionally, China's trade surplus was recorded as US$47.6 billion, with roughly half of the US$100 billion of China's total trade surplus going toward savings. There has been no change in the essence of China's export-oriented industries.

China's electronic information industry, like much of its economy, is both export-oriented and foreign capital-led.

In 2005, the sales, added value, profits, and exports of foreign firms (including 6,480 firms with 100% foreign capital, merged firms and joint firms) reached 2.4 trillion yuan, 503 billion yuan, 82.2 billion yuan, and US$234 billion, respectively, accounting for 77%, 77%, 77% and 87% of China's total electronic information industry for their respective categories. These figures are all considerably higher than 2004. The export surplus of US$44.8 billion produced by 100% foreign capital firms (2,241 firms) accounted for 94% of China's total.

The total ratio of value added for foreign firms in China is 20.9%, however, which is far behind the 27.6% ratio of local firms. There has been no major change in foreign firms' strategy for using China as an assembly base. Recently, though, there has been increasing activity by foreign firms regarding local management centers and R&D bases, as well as in investment in the electronic parts industry.