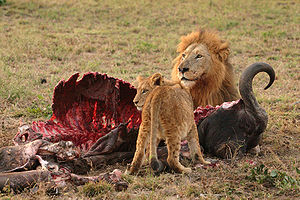 Lions are voracious carnivores; they require up to seven kilograms (15 lbs) of meat per day. A major component of their diet is the flesh of large mammals, like this African buffalo.

/ˈkɑrnɪvɔər/), meaning 'meat eater' (Latin carne meaning 'flesh' and vorare meaning 'to devour'), is an organism that derives its energy and nutrient requirements from a diet consisting mainly or exclusively of animal tissue, whether through predation or scavenging.[1][2] Animals that depend solely on animal flesh for their nutrient requirements are considered obligate carnivores while those that also consume non-animal food are considered facultative carnivores.[2] Omnivores also consume both animal and non-animal food, and apart from the more general definition, there is no clearly defined ratio of plant to animal material that would distinguish a facultative carnivore from an omnivore, or an omnivore from a facultative herbivore, for that matter.[3] A carnivore that sits at the top of the foodchain is an apex predator. 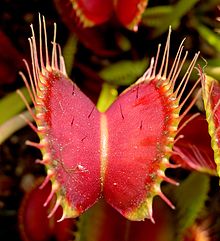 The word "carnivore" sometimes refers to the mammalian Order Carnivora, but this is somewhat misleading. Although many Carnivora fit the definition of being exclusively meat eaters, not all do. For example, most species of bears are omnivorous, except for the giant panda, which is almost exclusively herbivorous, and the carnivorous polar bear. In addition, many carnivorous species are not members of Carnivora.

Obligate or true carnivores depend solely on the nutrients found in animal flesh for their survival. While they may consume small amounts of plant material, they lack the physiology required for the efficient digestion of vegetable matter and, in fact, some carnivorous mammals eat vegetation specifically as an emetic. The domestic cat is a prime example of an obligate carnivore, as are all of the other felids. The ability to produce synthetic forms of nutrients such as taurine in the lab has allowed feed manufacturers to formulate foods for carnivores (zoo animals and pets) with varying amounts of plant material.

The diet of a hypercarnivore consists of more than 70% meat, that of a mesocarnivore 50-70%, and that of a hypocarnivore less than 30%, with the balance consisting of non-animal foods, which may include fungi, fruits, and other plant material.

Characteristics commonly associated with carnivores include organs for capturing and disarticulating prey (teeth and claws serve these functions in many vertebrates) and status as a predator. In truth, these assumptions may be misleading, as some carnivores do not hunt and are scavengers (though most hunting carnivores will scavenge when the opportunity exists). Thus they do not have the characteristics associated with hunting carnivores. Carnivores have comparatively short digestive systems, as they are not required to break down tough cellulose found in plants. Carnivores will also generally possess eyes that face forward, affording binocular vision and depth perception necessary to pounce on prey, as contrasted to the usual herbivore arrangement of eyes set on opposite sides of the head, sacrificing binocular vision for a nearly 360 degree field of vision as a defense against predators.

The first vertebrate carnivores were fish, and then amphibians that moved on to land. Early tetrapods were large amphibious piscivores. While amphibians continued to feed on fish and later insects, reptiles began exploring two new food types, tetrapods (carnivory), and later, plants (herbivory). Carnivory was a natural transition from insectivory for medium and large tetrapods, requiring minimal adaptation (in contrast, a complex set of adaptations was necessary for feeding on highly fibrous plant materials).[4]

Prehistoric mammals of the crown-clade Carnivoramorpha (Carnivora and Miacoidea without Creodonta), along with the early order Creodonta, and some mammals of the even earlier order Cimolesta, were true carnivores. The earliest carnivorous mammal is considered[by whom?] to be the Cimolestes that existed during the Late Cretaceous and Tertiary Periods in North America about 65 million years ago. Most species of Cimolestes were mouse to rat-sized, but the Late Cretaceous Cimolestes magnus reached the size of a marmot, making it one of the largest Mesozoic mammals known (20-60g). The cheek teeth combined the functions of piercing, shearing and grinding, and the molars of Palaeoryctes had extremely high and acute cusps that had little function other than piercing. The dentition of Cimolestes foreshadows the same cutting structures seen in all later carnivores. While the earlier smaller species were insectivores, the later marmot-sized Cimolestes magnus probably took larger prey and were definitely a carnivore to some degree. The cheek teeth of Hyracolestes ermineus (an ermine-like shrew - 40g) and Sarcodon pygmaeus ("pygmy flesh tooth" - 75g), were common in the latest Paleocene of Mongolia and China and occupied the small predator niche. The cheek teeth show the same characteristic notches that serve in today's carnivores to hold flesh in place to shear apart with cutting ridges.

The theropod dinosaurs such as Tyrannosaurus rex that existed during the Mesozoic Era were "obligate carnivores". 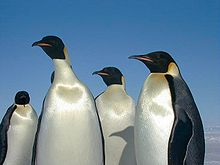 In contrast to the tiger, these emperor penguins show that teeth and claws are not necessary to be a carnivore. They feed on crustaceans, fish, squid, and other small marine life. 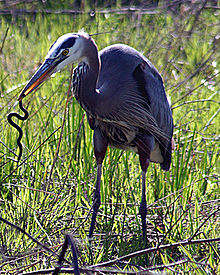 Great Blue Heron with a snake 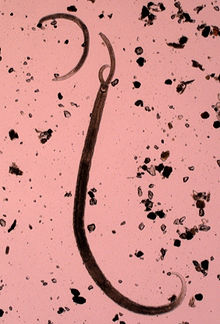 Some nematodes are also carnivorous, for instance this Mononchidae eating another Mononchidae.