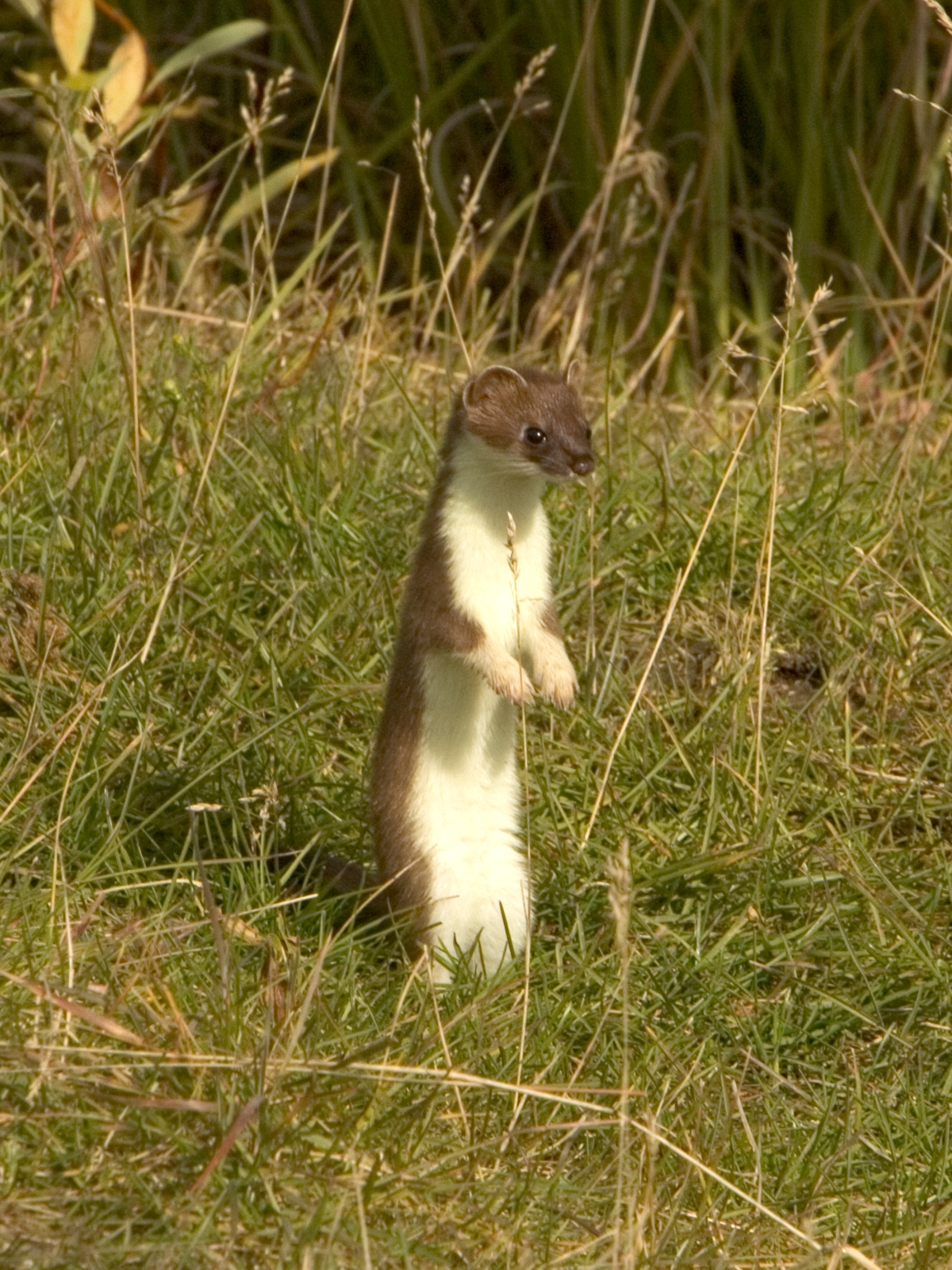 The Ermine ("Mustela erminea") is a small of the family . It is also known as the stoat and the short-tailed weasel.

The Ermine can be found almost everywhere throughout the northern temperate, subarctic and Arctic regions, of , , and . In an unsuccessful attempt to control the population, it was introduced into . Ermine are largely or but will sometimes come out during the day.

The Ermine is a member of the family , which also includes other weasels, , s, , badgers, s, the , s, the , the fisher and in some taxonomical classifications s. This is one of the most species-rich families in order Carnivora. The Ermine moves in a sinuous manner when pursuing its prey extremely quick over the ground considering its small size, and is also a strong swimmer that is able to colonize offshore islands. Although it inhabits northern latitudes, the Ermine is built long and thin, leading to an increased surface area-to-volume ratio and increased dissipation of from its body. The advantage of this shape is that it is one of the few species able to follow burrowing animals into their own homes. It partly compensates for this shape by having short legs, small s, a fast and, in winter, thick . Ermines may grow up to 30 cm long, with males much larger than the females. In most areas it coexists with the weasel ("Mustela nivalis", also known as the ), the smallest member of order Carnivora. Where the weasel is absent the Ermine is smaller (~70 g).

The Ermine's coat is a rich medium brown with an off-white belly. In , the coat is thicker and in regions that experience an inch or more of snow for at least forty days of the year (such as in [Christopher J. Walker, "Armenia: Survival of a Nation," London, 1990] ), the color changes to clean white. This white fur is known as "ermine", a term originating either from the Latin phrase "Armenius mūs" ("Armenian rat") [ [http://dictionary.reference.com/browse/ermine ermine - Definitions from Dictionary.com ] ] or from a word common to the Germanic and Baltic languages, [ [http://starling.rinet.ru/cgi-bin/etymology.cgi?single=1&basename=/data/ie/piet&text_number=+++543&root=config Indo-European etymology : List with all references ] ] hence the scientific name. At this stage, where the animal is known as a "stoat", it may be referred to as ermine, or as being "in ermine". The winter Ermine has been used in art as a symbol of purity or virginity. The white fur was highly prized, and used in the robes of the . Both the animal and the heraldic tincture are symbols of . The furs would be sewn together making a pattern of black dots. A version of this pattern is used in heraldry as ermine tincture.

In all seasons the Ermine has a black tip to its tail. The black tip probably serves as a decoy to predators, which would include almost any carnivore large enough to eat a Ermine (e.g. wolves, foxes, wolverines, and some birds of prey). This kind of coat is very similar to the coat of the ("Mustela frenata"), a related animal of about the same size which also moults into white in the northern part of its range, and it is easy to confuse these kinds of weasels. The North American name for the Ermine, the "Short-tailed weasel" arose because its tail length distinguishes it from the long-tailed weasel. In general it is found farther north. Both species can be distinguished from the weasel because the weasel lacks a black tip on its tail.

The Ermine is native to the area between the 40th parallel (north) and the beginning of the , which encompasses most of northern and .

They have been introduced to and to control a but found an alternative source of food easier to catch thus leaving the rabbit problem unsolved. They were also brought to Terschelling Island to control water voles ("Arvicola terrestris"). Ermines can swim up to 1.5 kilometers across seawater and have already reached several New Zealand offshore islands unaided. which is 900 meters offshore has been colonised multiple times in the past 20 years.

The Ermine is a carnivore. It eats , s; s such as the , and ; other small mammals; s and their eggs and young; and sometimes , s, ns, and s. It is a very skillful climber and can descend a trunk headfirst, like a . The Ermine is capable of killing animals much larger than itself. When it is able to obtain more than it can eat it will engage in "surplus killing" and often stores the extra for later. When this is the case, it will often kill by breaking the prey's neck without marking the body, presumably so its cache does not spoil easily.

There are several recorded instances of Ermines 'transfixing' rabbits by exhibiting a tumbling routine akin to a dance. Rabbits appear hypnotised by this activity and fail to notice the Ermine approach within striking distance. Once close enough, the rabbit falls easy prey to the Ermine.

Like other s it typically dispatches its prey by biting into the base of the to get at the centers of the responsible for such important biological functions as . Sometimes it will also make preliminary bites to other areas of the body. In most areas in which Ermines and least weasels co-exist, the weasel generally takes smaller prey and the Ermine slightly larger prey. The larger male Ermines generally take larger prey than females. Commonly, the Ermine falls prey to animals such as the wolf, fox, cat or badger.

The Ermine is territorial and intolerant of others in its range, especially others of the same sex. Within its range, it typically uses several dens, often taken from species. It usually travels alone, except when it is mating or is a mother with older offspring. It breeds once a year, producing several young kits (or kittens) per litter, and its mating system is promiscuous. Copulation occurs during the mating season with multiple partners and is often forced by the male, who does not help raise the offspring. Sometimes it occurs when the female is so young she has not even left the den. In spite of being such a small animal, the Ermine's is among the longest reported for mammals (11 s) because of the adaptation of delayed implantation, or embryonic diapause, in which a fertilized egg is not implanted in the until months later. The animal's "real" gestation is much shorter. This is presumably an adaptation to the highly seasonal environment in which the Ermine lives.

Communication (and also location of prey) occurs largely by , since the Ermine as typical of mammals has a sensitive . As a result much of this communication is missed by human observers. However, Ermines are believed to identify females in by scent, and also the sex, health and age of prey. Some kinds of rodents such as voles have counter-adapted by being able to shut down reproduction (which makes females slower and easier to catch) if they smell the odor of . The Ermine's visual resolution is lower than that of humans and is poor, although night vision is superior. Like most other non-primate mammals they have ic colour vision (they can distinguish long from short wavelengths of light, but cannot make distinctions of hue within those bands). Tactile information is conferred by the , or whiskers. When alarmed, a Ermine can release a powerful musky smell from glands near its anus.

Ermines and the nobility

The skins of Ermines were prized by the fur trade, especially in winter coat, and used to trim coats and stoles. The fur from the winter coat is referred to as "ermine". In Europe these furs were a symbol of royalty; the ceremonial robes of members of the UK are trimmed with ermine, though artificial fur is now used. The ermine was also considered a symbol of purity in Europe. In the era, legend had it that an ermine would die before allowing its pure white coat to be besmirched. When it was being chased by hunters, it would supposedly turn around and give itself up to the hunters rather than risk soiling itself. 's "Emblem 75", which depicts an ermine being pursued by a hunter and two hounds, is entitled "Cui candor morte redemptus" or "Purity bought with his own death." Peacham goes on to preach that men and women should follow the example of the ermine and keep their minds and consciences as pure as the legendary ermine keeps its fur. [ [http://f01.middlebury.edu/FS010A/STUDENTS/n075.htm The Minerva Britanna Project] ] In some Nordic countries the Ermine is invoked as a symbol of curiosity and timely action. In some areas of , because of its adorable appearance and somewhat elusive nature it is still considered a symbol of good luck.