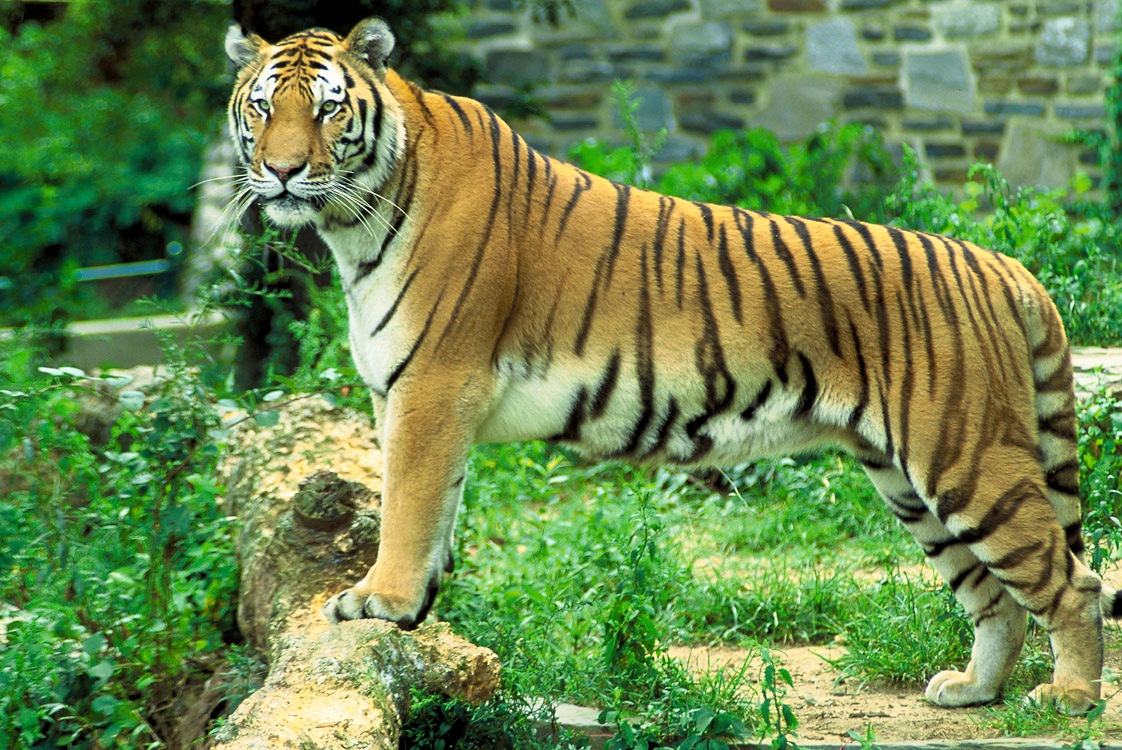 image_caption = A Bengal Tiger in India's Bandhavgarh reserve.
image_width = 280px
regnum = ia
phylum = Chordata
classis = ia
ordo =
familia =
genus = ""
species = "P. tigris"
subspecies = "P. t. tigris"
trinomial = "Panthera tigris tigris"
trinomial_authority = (Linnaeus, 1758)The Bengal tiger, or Royal Bengal tiger ("Panthera tigris tigris" or "Panthera tigris bengalensis"), is a of primarily found in , , and also ,, , and southern . [cite web | title=Most numerous tiger pushed out of its home | url=http://www.panda.org/about_wwf/what_we_do/species/about_species/species_factsheets/tigers/bengal_tiger/index.cfm | publisher= | accessdate=2007-04-30] It has traditionally been considered the second largest subspecies after the , but Northern Bengal Tigers are often larger than Siberian tigers. So far the heaviest Bengal tigers captured in Nepal for research have been heavier than recently captured Siberian tigers. [ [http://www.amur-leopard.org/index.php?pg=1209291715 Amur Leopard and Tiger Alliance (ALTA)] ] It is the most common tiger subspecies, living in a variety of habitats, including grasslands, subtropical and tropical rainforests, scrub forests, wet and dry deciduous forests, and mangroves. The Bengal subspecies "P. tigris tigris" is the of , while at the species level the "" is the of [ [http://india.gov.in/knowindia/national_animal.php National Animal- "Panthera tigris"] website.] .

The of this subspecies is generally orange-brown with black stripes, although there is a that sometimes produces s, as well as a rare variation (less than 100 known to exist, all in captivity) called the Golden Tabby as a white coat with golden patches and stripes that are much paler than normal.

Bengal tigers hunt small-sized and large-sized s, such as wild , , , , , water buffalo, ,, , and they also feed on and other animals. They sometimes prey on smaller animals such as s, , or , and is also readily taken. Bengal tigers have also been known to prey on young s and rhino calves in rare documented cases. For instance, the is fostering an orphaned rhino whose mother was killed by a tiger. Famous Indian hunter and naturalist Jim Corbett described an incident where two tigers fought and killed a large bull elephant. Bengal tigers have also been known to take other predators such as leopards, wolves, s, es, s, , s, and s as prey, although these predators are not typically a part of the tiger's diet.

It is said that the Bengal tiger almost always preys on smaller animals such as and boarBy whom, but this is incorrect, though, since it is a hunter, it needs to be very strong to enable it to take down large prey such as gaur and water buffaloDubious. Bengal tigers prefer to hunt mostly by day, but are awake in the nighttime. During the day, the cover of the tall "" gives the feline excellent . Bengals kill prey by overpowering their victim and severing the (preferred method for smaller prey), or applying a bite of the throat for large prey. A Bengal tiger will usually drag its kill to a safe place to eat away from possible predators. Despite their size, Bengal tigers can climb trees effectively, but they are not as adept as the smaller , which hides its kills from other in the trees. Bengal tigers are also strong and frequent swimmers, often ambushing drinking or swimming prey or chasing prey that has retreated into water. The Bengal tiger can consume up to about 30 kg (66 lb) of meat at a time and then go without eating for days. [cite news | title=Bengal Tiger| url=http://www3.nationalgeographic.com/animals/mammals/bengal-tiger.html| publisher=National Geographic | accessdate=2007-05-01] These tigers normally hunt deer or anything above 100 pounds, but when driven to hunger, it will eat anything, such as frogs, fowl, crocodiles, domestic livestock and sometimes humans. Bengal Tigers are and have no natural predators outside of man

Since the early 1990s the tiger population has begun to decline again, due to habitat destruction and large-scale poaching for tiger skins and bones. The Bangladeshi government is trying hard to show the world that the tiger is thriving in Bangladesh, often using controversial techniques like taking molds of paw prints to track tiger populations. It was recently discovered that tigers have been wiped out from one of Project Tiger's leading sanctuaries, .

Habitat loss and are important threats to species survival. Poachers kill tigers not only for their pelts, but also for body parts used to make various traditional n . Other factors contributing to their loss are and revenge killing. Farmers blame tigers for killing cattle and will shoot them. Poachers also kill tigers for their bones and teeth to make medicines that are alleged to provide the tiger's strength. The hunting for Chinese medicine and fur is the biggest cause of decline of the tigers. In India, retired personnel are being recruited to save the Bengal tiger from poaching gangs.

Tara, a hand-reared supposedly Bengal tigress acquired from in in July 1976, was trained by and reintroduced to the wild in , with the permission of India’s then Prime Minister in an attempt to prove the experts wrong that zoo-bred hand-reared tigers can ever be released in the wild with success. In the 1990s some tigers from Dudhwa were observed which had the typical appearance of Siberian tigers: white complexion, pale fur, large head and wide stripes. With recent advances in science it was subsequently found that s s have polluted the otherwise pure Bengal tiger gene pool of Dudhwa National Park. It was proved later that Twycross Zoo had been irresponsible and maintained no breeding records and had given India a hybrid Siberian-Bengal Tigress instead. Dudhwa tigers constitute about 1% of India's total wild population, but the possibility exists of this spreading to other tiger groups; at its worst, this could jeopardize the Bengal tiger as a distinct [ [http://www.indianexpress.com/res/web/pIe/ie/daily/19981119/32350524.html Indian tiger isn't 100 per cent “swadeshi (Made in India)”; by PALLAVA BAGLA; Indian Express Newspaper; ] ] [ [http://www.india-today.com/itoday/17111997/wild.html Tainted Royalty, WILDLIFE: ROYAL BENGAL TIGER, A controversy arises over the purity of the Indian tiger after DNA samples show Siberian tiger genes. By Subhadra Menon. INDIA TODAY, ] ] [ [http://www.lairweb.org.nz/tiger/tara4.html The Tale of Tara, 4: Tara's Heritage from Tiger Territory website] ] [ [http://www.lairweb.org.nz/tiger/bengal.html Genetic pollution in wild Bengal tigers, Tiger Territory website] ] [ [http://www.sanctuaryasia.com/interviews/bilarjsingh.php Interview with Billy Arjan Singh: Dudhwa's Tiger man, October 2000, Sanctuary Asia Magazine, sanctuaryasia.com] ] [ [http://www.iisc.ernet.in/~currsci/nov10/articles18.htm Mitochondrial DNA sequence divergence among big cats and their hybrids by Pattabhiraman Shankaranarayanan* and Lalji Singh*, *Centre for Cellular and Molecular Biology, Uppal Road, Hyderabad 500 007, India, Centre for DNA Fingerprinting and Diagnostics, CCMB Campus, Uppal Road, Hyderabad 500 007, India] ] [ [http://www.cza.nic.in/research1.html Central Zoo Authority of India (CZA), Government of India] ] [ [http://www.sciencemag.org/content/vol278/issue5339/r-samples.dtl#278/5339/807b "Indians Look At Their Big Cats' Genes", Science, Random Samples, Volume 278, Number 5339, Issue of 31 October 1997, 278: 807 (DOI: 10.1126/science.278.5339.807b) (in Random Samples),The American Association for the Advancement of Science] ] [ [http://www.fatheroflions.org/ArjanSingh.html BOOKS By & About Billy Arjan Singh] ] [ [https://www.vedamsbooks.com/no32235.htm Book - Tara : The Cocktail Tigress/Ram Lakhan Singh. Edited by Rahul Karmakar. Allahabad, Print World, 2000, xxxviii, 108 p., ills., $22. ISBN 81-7738-000-1. A book criticizing Billy Arjan Singh's release of hand reared hybrid Tigress Tara in the wild at Dudhwa National Park in India] ] .

There is a Bengal tiger rewilding project started by in 2000. This project involves bringing captive-bred zoo Bengal tiger cubs, and for them to be trained by their human trainers so that the tigers can regain their predatory instincts. Once they prove that they can sustain themselves in the wild, they would be released into the wilderness of Africa to fend for themselves. Their trainers, and (Big Cat trainer and zoologist), have to teach them how to stalk, hunt, and most importantly to associate hunting with food. It is claimed that two bengal tigers have already succeeded in re-wilding and two more tigers are currently undergoing their re-wilding training. This project is featured by as a documentary, "Living With Tigers". It was voted one of the best Discovery Channel documentaries in 2003.

A strong criticism about this project is with the chosen . s state that the four tigers (Ron, Julie, Seatao and Shadow) involved in the rewilding are not purebred Bengal tigers and should not be used for breeding. The four are not recorded in the Bengal tiger and should not be deemed as Bengal tigers. Many tigers in the world's zoos are impure and there is no reason to suppose these four are not among them. [ [http://www.lairweb.org.nz/tiger/release10.html Releasing Captive Tigers - South Africa ] ] The 1997 International Tiger Studbook lists the current of Bengal tigers at 210 tigers. All of the studbook-registered is maintained in Indian zoos, except for one female Bengal tiger in North America. [ [http://www.savethetigerfund.org/Content/NavigationMenu2/Community/TigerSubspecies/BengalTigers/default.htm Save The Tiger Fund | Bengal Tiger ] ] It is important to note that Ron and Julie (2 of the tigers) were bred in the and hand-raised at in [ [http://www.jvbigcats.co.za/ronjulie.htm Ron and Julie, Living with Tigers, Tiger Canyons, John Varty ] ] , while Seatow and Shadow are two tigers bred in South Africa. [ [http://www.jvbigcats.co.za/seataoshadow.htm Seatao and Shadow, Tiger Canyons, John Varty ] ]

The tigers in the Tiger Canyons Project have recently been confirmed to be crossbred Siberian/Bengal tigers. Tigers that are not genetically pure are not allowed to be released into the wild and will not be able to participate in the tiger which aims to breed genetically pure tiger specimens and individuals.

The has been proven to be a fraud. [http://www.wildeye.co.uk/wildlife-film/Wfn/wfn56.htm] The Tigers are unable to hunt and film crew chased the prey up against the fence and into the path of the tigers just for the sake of dramatic footage. Cory Meacham, a US-based environmental journalist mentioned that "the film has about as much to do with tiger conservation as a Disney cartoon." In addition, the tigers have not been released - and indeed still reside in a small enclosure under constant watch and with frequent contact. The Discovery documentary contains footage which its maker, John varty, has admitted on affidavit to be false. Conservationists fear that public will be misled in this cynical fashion. [http://www.nomadtours.co.za/article_2006-6-2_5.html] The project was never about Conservation, it was for good tv and for money.

Using technology to save Tigers in India

The WII estimates showed that tiger numbers had fallen in Madhya Pradesh by 61%, Maharashtra by 57%, and Rajasthan by 40%. Compare this with the government's first tiger census; conducted under the Project Tiger initiative, begun in 1973, it counted 1,827 tigers in the country that year. Since then the tiger population saw a steady rise to reach 3,700 tigers in 2002. Use of technology has effectively curtailed the numbers by half.

Tiger scientists in India like Raghu Chundavat and Ulhas Karanth have faced lot of backlash from the forest department. Both these scientists have been for years calling for use of technology in the conservation efforts. For instance, Raghu, in the past, had been involved with radio telemetry, i.e., collaring the tigers. Ulhas has been instrumental in using camera traps. Even the project to map all the forest reserves in India has not been completed yet, though the Ministry of Environment and Forests had sanctioned Rs. 13 million for the same in March 2004.

A recent article written by Shashwat DC and published in the Dataquest Magazine, talks about the issue in complete detail [http://shashwatdc.blogspot.com/2007/07/last-roar.html] . In the story noted Wildlife expert, George Schaller has been quoted as saying: