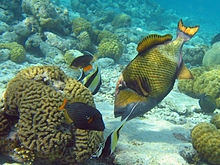 A titan triggerfish (Balistoides viridescens) creates feeding opportunities for smaller fish by moving large rocks too big for them to shift themselves.

Commensalism is harder to demonstrate than parasitism and mutualism, for it is easier to show a single instance whereby the host is affected, than it is to prove or disprove that possibility. Often, a detailed investigation will show that the host indeed has become affected by the relationship.

In India, lone golden jackals expelled from their pack have been known to form commensal relationships with tigers. These solitary jackals, known as kol-bahl, will attach themselves to a particular tiger, trailing it at a safe distance in order to feed on the big cat's kills. A kol-bahl will even alert a tiger to a kill with a loud pheal (thereby straying into mutualism). Tigers have been known to tolerate these jackals: one report describes how a jackal confidently walked in and out between three tigers walking together a few feet away from each other.[1] Tigers will however kill jackals on occasion: the now extinct tigers of the Amu Darya region were known to eat jackals frequently.[2]

Orchids and mosses are plants that can have a commensal relationship with trees. The plants grow on the trunks or branches of trees. They get the light they need as well as nutrients that run down along the tree. As long as these plants do not grow too heavy, the tree is not affected.

Barnacles, a type of arthropod in the subphylum Crustacea

Barnacles are highly sedentary crustaceans that must attach themselves permanently to a hard substrate, such as rocks, shells, whales or anything else on which they can gain a foothold. When they attach to the shell of a scallop, for instance, barnacles benefit by having a place to stay, leaving the scallop presumably unaffected.

Whether the relationship between humans and some types of our gut flora is commensal or mutualistic is still unanswered.

Some biologists argue that any close interaction between two organisms is unlikely to be completely neutral for either party, and that relationships identified as commensal are likely mutualistic or parasitic in a subtle way that has not been detected. For example, epiphytes are "nutritional pirates" that may intercept substantial amounts of nutrients that would otherwise go to the host plant.[3] Large numbers of epiphytes can also cause tree limbs to break or shade the host plant and reduce its rate of photosynthesis. Similarly, phoretic mites may hinder their host by making flight more difficult, which may affect its aerial hunting ability or cause it to expend extra energy while carrying these passengers. 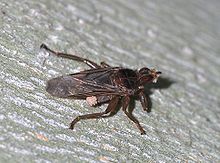 Like all ecological interactions, commensalisms vary in strength and duration from intimate, long-lived symbioses to brief, weak interactions through intermediaries.

Phoresy
One animal attaching to another for transportation only. This concerns mainly arthropods, examples of which are mites on insects (such as beetles, flies or bees), pseudoscorpions on mammals[4] or beetles, and millipedes on birds.[5] Phoresy can be either obligate or facultative (induced by environmental conditions).
Inquilinism
Using a second organism for housing. Examples are epiphytic plants (such as many orchids) that grow on trees, or birds that live in holes in trees.
Metabiosis
A more indirect dependency, in which one organism creates or prepares a suitable environment for a second. Examples include maggots, which feast and develop on corpses, and hermit crabs, which use gastropod shells to protect their bodies.