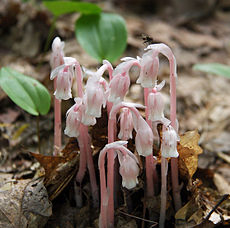 Monotropa uniflora, an obligate myco-heterotroph known to parasitize fungi belonging to the Russulaceae.[1]

Relationship between myco-heterotrophs and host fungi

In the past, non-photosynthetic plants were mistakenly thought to get food by breaking down organic matter in a manner similar to saprotrophic fungi. Such plants were therefore called "saprophytes". It is now known that no plant is physiologically capable of direct breakdown of organic matter and that in order to get food, non-photosynthetic plants must engage in parasitism, either through myco-heterotrophy or direct parasitism of other plants.[4][5]

In congruence with older reports, it has been recently shown that some myco-heterotrophic orchids can be supported by saprotrophic fungi, exploiting litter- or wood-decaying fungi.[9] In addition, several green plants (evolutionarily close to myco-heterotrophic species) have been shown to engage in partial myco-heterotrophy, that is, they are able to take carbon from mycorrhizal fungi, in addition to their photosynthetic intake.[10][11]