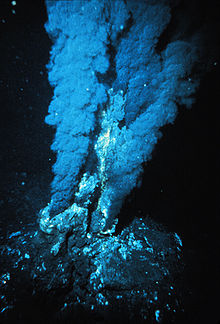 In ecology, a niche (

/ˈniːʃ/ or US /ˈnɪtʃ/)[1] is a term describing the relational position of a species or population in its ecosystem to each other; e.g. a dolphin could potentially be in another ecological niche from one that travels in a different pod if the members of these pods utilize significantly different food resources and foraging methods.[1] A shorthand definition of niche is how an organism makes a living. The ecological niche describes how an organism or population responds to the distribution of resources and competitors (e.g., by growing when resources are abundant, and when predators, parasites and pathogens are scarce) and how it in turn alters those same factors (e.g., limiting access to resources by other organisms, acting as a food source for predators and a consumer of prey).[2]

The word "niche" is derived from the Middle French word nicher, meaning to nest. The term was coined by the naturalist Joseph Grinnell in 1917, in his paper "The niche relationships of the California Thrasher."[3] The Grinnellian niche concept embodies the idea that the niche of a species is determined by the habitat in which it lives. In other words, the niche is the sum of the habitat requirements that allow a species to persist and produce offspring. For example, the behavior of the California Thrasher is consistent with the chaparral habitat it lives in—it breeds and feeds in the underbrush; and escapes from predators by shuffling from underbrush to underbrush.

This perspective of niche allows for the existence of ecological equivalents and also empty niches. For example, the anolis lizards of the Greater Antilles are a rare example of convergent evolution, adaptive radiation, and the existence of ecological equivalents—the anolis lizards evolved in similar microhabitats independently of each other and resulted in the same ecomorphs across all four islands.

In 1927 Charles Sutherland Elton, a British ecologist, gave the first working definition of the niche concept. He is credited with saying: "[W]hen an ecologist says 'there goes a badger,' he should include in his thoughts some definite idea of the animal's place in the community to which it belongs, just as if he had said, 'there goes the vicar.'"[4]

The Eltonian niche encompasses the idea that the niche is the role a species plays in a community, rather than a habitat.

The Hutchinsonian niche views niche as an n-dimensional hypervolume, where the dimensions are environmental conditions and the resources that define the requirements of an individual or a species to practise "its" way of life.

The niche concept was popularized by the zoologist G. Evelyn Hutchinson in 1957.[5] Hutchinson wanted to know why there are so many different types of organisms in any one habitat.

The full range of environmental conditions ( physical and biological , i.e. the resources ) under which an organism can exist describes its fundamental niche. As a result of pressure from, and interactions with, other organisms (e.g. superior competitors), species are usually forced to occupy a niche that is narrower than this, and to which they are mostly highly adapted. This is termed the realized niche. The ecological niche has also been termed by G.E. Hutchinson a "hypervolume." This term defines the multi-dimensional space of resources (e.g., light, nutrients, structure, etc.) available to (and specifically used by) organisms. The term adaptive zone was coined by the paleontologist, George Gaylord Simpson, and refers to a set of ecological niches that may be occupied by a group of species that exploit the same resources in a similar manner. (Simpson, 1944; After Root, 1967.)[citation needed]

Hutchinson's "niche" (a description of the ecological space occupied by a species) is subtly different from the "niche" as defined by Grinnell (an ecological role, that may or may not be actually filled by a species—see vacant niches).

Different species cannot occupy the same niche (or guild). A niche is a very specific segment of ecospace occupied by a single species. Species can however share a 'mode of life' or 'autecological strategy' which are broader definitions of ecospace.[6] For example, Australian grasslands species, though different from those of the Great Plains grasslands, occupy the similar modes of life.[7]

Once a niche is left vacant, other organisms can fill that position. For example, the niche that was left vacant by the extinction of the tarpan has been filled by other animals (in particular a small horse breed, the konik). Also, when plants and animals are introduced into a new environment, they have the potential to occupy or invade the niche or niches of native organisms, often outcompeting the indigenous species. Introduction of non-indigenous species to non-native habitats by humans often results in biological pollution by the exotic or invasive species.

The mathematical representation of a species' fundamental niche in ecological space, and its subsequent projection back into geographic space, is the domain of niche modelling.

The different dimensions, or plot axes, of a niche represent different biotic and abiotic variables. These factors may include descriptions of the organism's life history, habitat, trophic position (place in the food chain), and geographic range. According to the competitive exclusion principle, no two species can occupy the same niche in the same environment for a long time.[8]