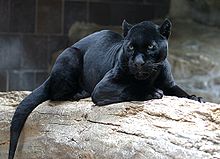 The black panther is the prototypical example of melanism.

Melanism is an undue development of dark-colored pigment in the skin or its appendages, and the opposite of albinism. It is also the medical term for black jaundice.[1] The word is deduced from the Greek: μελανός, meaning black pigment.[2] It is the occurrence of an increased amount of dark pigmentation of skin, feathers, eyes or hair in an organism, resulting from the presence of melanin. It is the opposite of leucism, which occur because of a lack of melanin or other types of pigment.

Abundism is the occurrence of excessively abundant dark markings (such as spots, stripes or other patch types) due to increased dark pigmentation on the coat, fur or skin of some animal species. As the number and/or size of these markings increases, some overlap and merge causing the effect of pseudomelanism where the animal appears completely black. The background color may still be discerned between the markings.

Melanism (and pseudomelanism) is often the result of genetic mutation, but can result from other stimuli, such as exposure to abnormal temperature changes during gestation which transiently alter gene transcription or translation.[citation needed]

In the context of diseases, the condition in which abnormally dark pigmentation of some tissues occurs is coined melanosis.[citation needed] For a description of melanin-related disorders see melanin, melanosis coli and ocular melanosis.

The opposite of melanism is amelanism, a deficiency in or total absence of melanin pigments. In humans and many other animals, this most commonly manifests as albinism, although other forms exist, such as leucism. 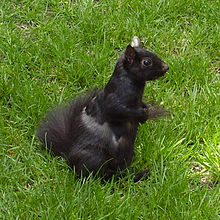 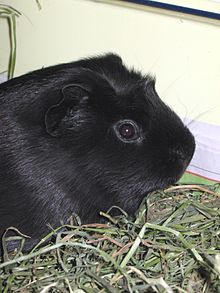 Melanistic Guinea pigs are relatively rare, and considered especially effective in ritual use by Andean curanderos.[3]

Melanism related to the process of adaptation is called adaptive. Most commonly, dark individuals become fitter to survive and reproduce in their environment as they are better camouflaged. This makes some species less conspicuous to predators, while others such as Black panthers use it as a foraging advantage during night hunting.[4] Typically adaptive melanism is heritable: A dominant gene, which is entirely or nearly entirely expressed in the phenotype is responsible for the excessive amount of melanin. Adaptive melanism has been shown to occur in a variety of animals, including mammals such as squirrels, many felines and canids, and coral snakes. Adaptive melanism can lead to the creation of morphs, the most notable example being the peppered moth whose evolutionary history in the United Kingdom is offered as a classic instructional tool for teaching the principles of natural selection.[5]

Industrial melanism is adaptive melanism caused by anthropogenic alteration of the natural environment in terms of industrial pollution. As soot, smoke and other industrial pollutants from factories darken the landscape and because many organisms rely on camouflage to avoid predation, this sudden change in their environment makes them highly vulnerable to predators. This creates a strong selective pressure which will see any organism with a darker colour much more likely to survive and contribute to the gene pool of the next generation. Rare mutations are hence selected for and over time the population will adjust to a new equilibrium.[6] Peppered moth evolution is commonly used as an example of industrial melanism.

Melanism in the Cat Family

Melanistic coat coloration occurs as a common polymorphism in 11 of 37 felid species and reaches high population frequency in some cases but never achieves complete fixation. The black panther, a melanic form of leopard is common in the equatorial rainforest of Malaya and the tropical rainforest on the slopes of some African mountains such as Mount Kenya. The serval also has melanic forms not uncommon in certain areas of East Africa. In the jaguarundi coloration varies from dark brown and gray to light reddish. Melanic forms of jaguar are apparently fairly common in certain parts of South America.[7] In 1938 and 1940, two melanistic bobcats were trapped alive in sub-tropical Florida.[8]

In 2003, the dominant mode of inheritance of melanism in jaguars was confirmed by performing phenotype transmission analysis in a 116-individual captive pedigree. Melanistic animals were found to carry at least one copy of a mutant MC1R sequence allele, bearing a 15-base pair inframe deletion. Ten unrelated melanistic jaguars were either homozygous or heterozygous for this allele. A 24-base pair deletion causes the incompletely dominant allele for melanism in the jaguarundi. Sequencing of the agouti signalling peptide in the agouti gene coding region revealed a 2-base pair deletion in black domestic cats. These variants were absent in melanistic individuals of Geoffroy’s cat, oncilla, pampas cat and Asian golden cat, suggesting that melanism arose independently at least four times in the cat family.[9]

Melanism in leopards is inherited as a Mendelian, monogenic recessive trait relative to the spotted form. Pairings of black animals inter se have a significantly smaller litter size than other possible pairings.[10] Between January 1996 and March 2009, leopards were photographed at 16 sites in the Malay Peninsula that had a sampling effort of more than 1000 trap nights. Of 445 photographs of melanistic leopards taken, 410 came from study sites south of the Isthmus of Kra, where the non-melanistic morph was never photographed. These data suggest the near fixation of the dark allele in the region. The expected time to fixation of this recessive allele due to genetic drift alone ranged from about 1,100 years to about 100,000 years.[11] Melanism in leopards has been hypothesized to be causally associated with a selective advantage for ambush.[12]

Another theory is that the black leopards have increased resistance to viruses, indicative of a potential immune benefit to melanism.[citation needed]

Tigers and lions may also have the potential to be melanistic, but while there may have been black lions and tigers in the past, it is also quite possible melanistic bloodlines are extinct.[citation needed]

Melanism and the immune system

Melanism has been found to be linked to beneficial changes in the immune system. The Smithsonian Answer Book: Cats notes that genes for melanism in felines may provide resistance to viral infections and that a viral epidemic may explain the prevalence of black leopards in Java and Malaysia, and the relatively high incidence of black leopards and black servals in the Aberdares region of Africa.[citation needed] Previously, black furred felines in the Aberdares had been considered a high altitude adaptation due to absorbing more heat.[citation needed]

Studies reported in New Scientist magazine in 2003 also suggested that recessive-gene melanism is linked to disease resistance rather than altitude. Melanistic cats may have better resistance to disease than cats with "normal" colour coats. This would explain why recessive melanism persists when melanistic individuals are disadvantaged due to being poorly camouflaged in open areas. According to Eduardo Eizirik and Stephen O'Brien of the United States National Cancer Institute in Maryland, the melanism mutations involve the same gene family as those involved in humans.[citation needed]

In the United States National Cancer Institute studies, black cats were found to have changes to a gene known as MC1R. MC1R is a member of a family of genes that includes the human gene CCR5 which codes for a protein on the cell membrane. Melanism could make black cats less susceptible to certain viral infections, making melanism an evolutionary advantage.

Melanism as a socio-political movement

The term melanism has been used on usenet, internet forums and blogs to mean an African-American social movement holding that dark-skinned humans are in some measures superior to those of other skin colour. The term melanism has been used in this context as early as the mid-1990s[13] and was promoted by some Afrocentrists, such as Frances Cress Welsing.