The larynx (plural larynges), commonly called the voice box, is an organ in the neck of amphibians, reptiles (incl. birds) and mammals[citation needed] (including humans) involved in breathing, sound production, and protecting the trachea against food aspiration. It manipulates pitch and volume. The larynx houses the vocal folds (commonly but improperly termed the "vocal cords"), which are essential for phonation. The vocal folds are situated just below where the tract of the pharynx splits into the trachea and the esophagus.

In adult humans, the larynx is found in the anterior neck at the level of the C3–C6 vertebrae. It connects the inferior part of the pharynx (hypopharynx) with the trachea. The laryngeal skeleton consists of nine cartilages: three single (epiglottic, thyroid and cricoid) and three paired (arytenoid, corniculate, and cuneiform). The hyoid bone is not part of the larynx, though it is connected to it. The larynx extends vertically from the tip of the epiglottis to the inferior border of the cricoid cartilage. Its interior can be divided in supraglottis, glottis and subglottis. 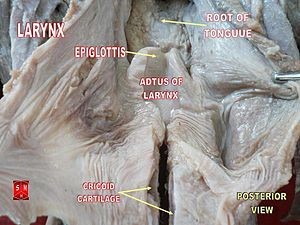 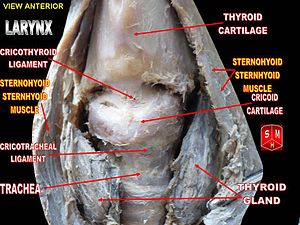 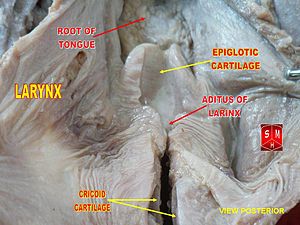 In newborn infants, the larynx is initially at the level of the C2–C3 vertebrae, and is further forward and higher relative to its position in the adult body.[1] The larynx descends as the child grows.[2][3]

Sound is generated in the larynx, and that is where pitch and volume are manipulated. The strength of expiration from the lungs also contributes to loudness.[4]

Fine manipulation of the larynx is used to generate a source sound with a particular fundamental frequency, or pitch. This source sound is altered as it travels through the vocal tract, configured differently based on the position of the tongue, lips, mouth, and pharynx. The process of altering a source sound as it passes through the filter of the vocal tract creates the many different vowel and consonant sounds of the world's languages as well as tone, certain realizations of stress and other types of linguistic prosody. The larynx also has a similar function as the lungs in creating pressure differences required for sound production; a constricted larynx can be raised or lowered affecting the volume of the oral cavity as necessary in glottalic consonants.

The vocal folds can be held close together (by adducting the arytenoid cartilages), so that they vibrate (see phonation). The muscles attached to the arytenoid cartilages control the degree of opening. Vocal fold length and tension can be controlled by rocking the thyroid cartilage forward and backward on the cricoid cartilage (either directly by contracting the cricothyroids or indirectly by changing the vertical position of the larynx), by manipulating the tension of the muscles within the vocal folds, and by moving the arytenoids forward or backward. This causes the pitch produced during phonation to rise or fall. In most males the vocal folds are longer and with a greater mass, producing a deeper pitch.

During swallowing, the backward motion of the tongue forces the epiglottis over the glottis' opening to prevent swallowed material from entering the larynx which leads to the lungs; the larynx is also pulled upwards to assist this process. Stimulation of the larynx by ingested matter produces a strong cough reflex to protect the lungs.

Injury to the external laryngeal nerve causes weakened phonation because the vocal folds cannot be tightened. Injury to one of the recurrent laryngeal nerves produces hoarseness, if both are damaged the voice may or may not be preserved, but breathing becomes difficult.

Intrinsic muscles associated with the larynx

Notably, the only muscle capable of separating the vocal cords for normal breathing is the posterior cricoarytenoid. If this muscle is incapacitated on both sides, the inability to pull the vocal folds apart (abduct) will cause difficulty breathing. Bilateral injury to the recurrent laryngeal nerve would cause this condition. It is also worth noting that all muscles are innervated by the recurrent laryngeal branch of the vagus except the cricothyroid muscle, which is innervated by the external laryngeal branch of the superior laryngeal nerve (a branch of the vagus).

Extrinsic muscles associated with the larynx

In infant humans and most animals, the larynx is situated very high in the throat—a position that allows it to couple more easily with the nasal passages, so that breathing and eating are not done with the same apparatus. However, some aquatic mammals, large deer, and adult humans have descended larynges. Adult humans, cannot raise the larynx enough to directly couple it to the nasal passage. Despite its presence in deer, proponents of the aquatic ape hypothesis claim that the similarity between the descended larynx in humans and aquatic mammals supports their theory.[6]

Some anthropologists, such as Jeffrey Laitman, have suggested that the descended larynx, by extending the length of the vocal tract and thereby increasing the variety of sounds humans could produce, was a critical element in the development of speech and language, while others cite the presence of descended larynges in non-linguistic animals, as well as the ubiquity of nonverbal communication and language among humans, as counterevidence against this claim.[7]

Disorders of the larynx

There are several things that can cause a larynx to not function properly.[8] Some symptoms are hoarseness, loss of voice, pain in the throat or ears, and breathing difficulties. Larynx transplant is a rare procedure. The world's first successful operation took place in 1998 at the Cleveland Clinic, and the second took place in October 2010 at the University of California Medical Center in Sacramento.[9]

Most tetrapod species possess a larynx, but its structure is typically simpler than that found in mammals. The cartilages surrounding the larynx are apparently a remnant of the original gill arches in fish, and are a common feature, but not all are always present. For example, the thyroid cartilage is found only in mammals. Similarly, only mammals possess a true epiglottis, although a flap of non-cartilagenous mucosa is found in a similar position in many other groups. In modern amphibians, the laryngeal skeleton is considerably reduced; frogs have only the cricoid and arytenoid cartilages, while salamanders possess only the arytenoids.[12]

Vocal folds are found only in mammals, and a few lizards. As a result, many reptiles and amphibians are essentially voiceless; frogs use ridges in the trachea to modulate sound, while birds have a separate sound-producing organ, the syrinx.[12]

It is tube shaped and is 4.1 inches long.[citation needed]