pronunciation (help·info) Latin: tussis) is a sudden and often repetitively occurring reflex which helps to clear the large breathing passages from secretions, irritants, foreign particles and microbes. The cough reflex consists of three phases: an inhalation, a forced exhalation against a closed glottis, and a violent release of air from the lungs following opening of the glottis, usually accompanied by a distinctive sound.[1] Coughing can happen voluntarily as well as involuntarily.

Frequent coughing usually indicates the presence of a disease. Many viruses and bacteria benefit evolutionarily by causing the host to cough, which helps to spread the disease to new hosts. Most of the time, coughing is caused by a respiratory tract infection but can be triggered by choking, smoking, air pollution,[1] asthma, gastroesophageal reflux disease, post-nasal drip, chronic bronchitis, lung tumors, heart failure and medications such as ACE inhibitors.

Treatment should target the cause; for example, smoking cessation or discontinuing ACE inhibitors. Some people may be worried about serious illnesses, and reassurance may suffice. Cough suppressants such as codeine or dextromethorphan are frequently prescribed, but have been demonstrated to have little effect.[citation needed] Other treatment options may target airway inflammation or may promote mucus expectoration. As it is a natural protective reflex, suppressing the cough reflex might have damaging effects, especially if the cough is productive.[2]

A cough can be classified by its duration, character, quality, and timing.[3] The duration can be either acute (of sudden onset) if it is present less than three weeks, subacute if it is present between three and eight weeks, and chronic when lasting longer than eight weeks.[3] A cough can be non-productive (dry) or productive (when sputum is coughed up). It may occur only at night (then called nocturnal cough), during both night and day, or just during the day.[3]

A number of characteristic coughs exist. While these have not been found to be diagnostically useful in adults, they are of use in children.[3] A barky cough is part of the common presentation of croup,[4] while a staccato cough has been classically described with chlamydia pneumonia.[5]

A cough in children may be either a normal physiological reflex or due to an underlying cause.[3] In healthy children it may be normal in the absence of any disease to cough ten times a day.[3] The most common cause of an acute or subacute cough is a viral respiratory tract infection.[3] In adults with a chronic cough, i.e. a cough longer than 8 weeks, more than 90% of cases are due to post-nasal drip, asthma, eosinophilic bronchitis, and gastroesophageal reflux disease.[3] The causes of chronic cough are similar in children with the addition of bacterial bronchitis.[3]

A cough can be the result of a respiratory tract infection such as the common cold, pneumonia, pertussis, or tuberculosis. In the vast majority of cases, acute coughs, i.e. coughs shorter than 3 weeks, are due to the common cold.[6] In people with a normal chest X-ray, tuberculosis is a rare finding. Pertussis is increasingly being recognised as a cause of troublesome coughing in adults.

After a viral infection has cleared, the person may be left with a postinfectious cough. This typically is a dry, non-productive cough that produces no phlegm. Symptoms may include a tightness in the chest, and a tickle in the lungs. This cough may often persist for weeks after an illness. The cause of the cough may be inflammation similar to that observed in repetitive stress disorders such as carpal tunnel. The repetition of coughing produces inflammation which produces discomfort, which in turn produces more coughing creating a closed loop. Postinfectious cough typically does not respond to conventional cough treatments. Treatment consists of any anti-inflammatory medicine to treat the inflammation, and a cough suppressant to reduce frequency of the cough until inflammation clears. Inflammation may increase sensitivity to other existing issues such as allergies, and treatment of other causes of coughs (such as use of an air purifier or allergy medicines) may help speed recovery. A bronchodilator, which helps open up the airways, may also help treat this type of cough.

When coughing is the only complaint of a person who meets the criteria for asthma (bronchial hyperresponsiveness and reversibility), this is termed cough-variant asthma. Two related conditions are atopic cough and eosinophilic bronchitis. Atopic cough occurs in individuals with a family history of atopy, abundant eosinophils in the sputum, but with normal airway function and responsiveness. Eosinophilic bronchitis is also characterized by eosinophils in the sputum, without airway hyperresponsiveness or an atopic background. This condition responds to treatment with corticosteroids. Cough can also worsen in an acute exacerbation of chronic obstructive pulmonary disease.

Asthma is a common cause of chronic cough in adults and children. Coughing may be the only symptom the person has from their asthma, or asthma symptoms may also include wheezing, shortness of breath, and a tight feeling in their chest. Depending on how severe the asthma is it can be treated with bronchodilators (medicine which causes the airways to open up) or inhaled steroids. Treatment of the asthma should make the cough go away.

Chronic bronchitis is defined clinically as a persistent cough that produces sputum (phlegm) and mucus, for at least three months in two consecutive years. Chronic bronchitis is often the cause of “smoker’s cough.” The tobacco causes inflammation, secretion of mucus into the airway, and difficulty clearing that mucus out of the airways. Coughing helps clear those secretions out. May be treated by quitting smoking. May also be caused by Pneumoconiosis and long-term fume inhalation.

In people with unexplained cough, gastroesophageal reflux disease should be considered.[3] This occurs when acidic contents of the stomach come back up into the esophagus. Symptoms usually associated with GERD include heartburn, sour taste in the mouth, or a feeling of acid reflux in the chest, although, more than half of the people with cough from GERD don’t have any other symptoms. An esophageal pH monitor can confirm the diagnosis of GERD. Sometimes GERD can complicate respiratory ailments related to cough, such as asthma or bronchitis. The treatment involves anti-acid medications and lifestyle changes with surgery indicated in cases not manageable with conservative measures.

Coughing may be caused by air pollution including tobacco smoke, particulate matter, irritant gases, and dampness in the home.[3] The human health effects of poor air quality are far reaching, but principally affect the body's respiratory system and the cardiovascular system. Individual reactions to air pollutants depend on the type of pollutant a person is exposed to, the degree of exposure, the individual's health status and genetics. People who exercise outdoors, for example, on hot, smoggy days increase their exposure to pollutants in the air.

A foreign body can sometimes be suspected, for example if the cough started suddenly when the patient was eating. Rarely, sutures left behind inside the airway branches can cause coughing. A cough can be triggered by dryness from mouth breathing or recurrent aspiration of food into the windpipe in people with swallowing difficulties.

Angiotensin-converting enzyme inhibitors are drugs used in diabetics, heart disease, and high blood pressure. In 10-25%[citation needed] of the people who take it, it can cause them to have a cough as a side effect. Stopping the drug is the only way to make the cough go away. Such medicines for hypertension are very common in use such as ramipril and quinapril. There are cases of "cough of unknown origin" who had resolution with stopping the drug.[7]

Cough may also be caused by conditions affecting the lung tissue such as bronchiectasis, cystic fibrosis, interstitial lung diseases and sarcoidosis. Coughing can also be triggered by benign or malignant lung tumors or mediastinal masses. Through irritation of the nerve, diseases of the external auditory canal (wax, for example) can also cause cough. Cardiovascular diseases associated with cough are heart failure, pulmonary infarction and aortic aneurysm. Nocturnal cough is associated with heart failure, as the heart does not compensate for the increased volume shift to the pulmonary circulation, in turn causing pulmonary edema and resultant cough.[9] Other causes of nocturnal cough include asthma, post-nasal drip and gastroesophageal reflux disease (GERD).[10] Another cause of cough occurring preferentially in supine position is recurrent aspiration.[9]

Coughing may also be used for social reasons, such as the coughing before giving a speech. Cough may also be psychogenic, which is different from habit coughing and tic coughing.[8] Coughing may occur in tic disorders such as Tourette syndrome, although it should be distinguished from throat-clearing in this disorder.

Given its irritant nature to mammal tissues, capsaicin is widely used to determine the cough threshold and as a tussive stimulant in clinical research of cough suppressants. Capsaicin is what makes chilli peppers spicy, and might explain why workers in factories with these vegetables can develop a cough.

Coughing is not always involuntary, and can be used in social situations. Coughing can be used to attract attention, release internal psychological tension, or become a maladaptive displacement behavior. It is believed that the frequency of such coughing increases in environments vulnerable to psychological tension and social conflict. In such environments, coughing may become one of many displacement behaviors and/or defense mechanisms. 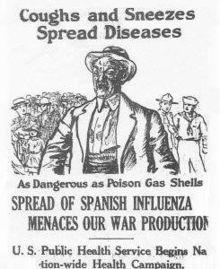 Coughing is viewed as a public health issue.

A cough is a protective reflex in healthy individuals which is influenced by psychological factors.[3] The cough reflex is initiated by stimulation of two different classes of afferent nerves, namely the myelinated rapidly adapting receptors, and nonmyelinated C-fibers with endings in the lungs. However it is not certain that the stimulation of nonmyelinated C-fibers leads to cough with a reflex as it's meant in physiology (with its own five components): this stimulation may cause mast cells degranulation (through an asso-assonic reflex) and edema which may work as a stimulus for rapidly adapting receptors.

The determination of the cause of a cough usually begins by determining if it is specific or nonspecific in nature.[3] A specific cough is one associated with other symptoms and further workup is dependent on these symptoms while a non specific cough occurs without other signs and symptoms.[3] Further workup may include labs, x rays, and spirometry.[3]

The treatment of a cough in children is based on the underlying cause with the use of cough medicine supported by little evidence and thus not recommended by the American Academy of Pediatrics.[3]

A trial of antibiotics or inhaled corticosteroids may be tried in children with a chronic cough in an attempt to treat protracted bacterial bronchitis or asthma respectively.[3]

The complications of coughing can be classified as either acute or chronic. Acute complications include cough syncope (fainting spells due to decreased blood flow to the brain when coughs are prolonged and forceful), insomnia, cough-induced vomiting, rupture of blebs causing spontaneous pneumothorax (although this still remains to be proven), subconjunctival hemorrhage or "red eye", coughing defecation and in women with a prolapsed uterus, cough urination. Chronic complications are common and include abdominal or pelvic hernias, fatigue fractures of lower ribs and costochondritis.

A cough is the most common reason for visiting a primary care physician in the United States.[3]

As of this edit, this article uses content from "Acute cough: a diagnostic and therapeutic challenge", which is licensed in a way that permits reuse under the Creative Commons Attribution-ShareAlike 3.0 Unported License, but not under the GFDL. All relevant terms must be followed.

↑ Arella, A. (nd), Coughing as an Indicator of Displacement Behaviour, <http://www.collectionscanada.ca/obj/s4/f2/dsk2/ftp01/MQ33337.pdf> (Unpublished thesis)