Foreign body
For other uses of this term, see foreign body (disambiguation).

A foreign body (Latin: corpus alienum) is any object originating outside the body. In machinery, it can mean any unwanted intruding object.

Most references to foreign bodies involve propulsion through natural orifices into hollow organs.

Foreign bodies can be inert or irritating. If they irritate they will cause inflammation and scarring. They can bring infection into the body or acquire infectious agents and protect them from the body's immune defenses. They can obstruct passageways either by their size or by the scarring they cause. Some can be toxic.

Both children and adults experience problems caused by foreign objects getting stuck in their bodies. Young children, in particular, are naturally curious and may intentionally put shiny objects, such as coins or button batteries, into their mouths. They also like to stick things in their ears and up their noses.[1] The effect of a foreign body can very different. For example, a coin causes local pressure on the tissue but generally, is not a medical emergency to remove. A button battery, which can be a very similar size to a coin, generates hydroxide ions at the anode and causes a chemical burn in 2 hours.[2] An ingested button battery that is stuck in the esophagus is a medical emergency. 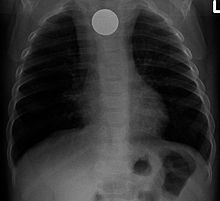 A coin seen on AP CXR in the esophargus 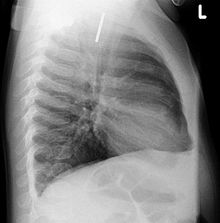 A coin seen on lateral CXR in the esophargus

One of the most common locations for a foreign body is the alimentary tract.

It is possible for foreign bodies to enter the tract from the mouth, or from the rectum.

It is also possible for a foreign body to enter the airways.[3]

In one study, peanuts were the most common obstruction.[4]. In addition to peanuts, hot dogs, and grapes, latex balloons are also a serious choking hazard in children that can result in death. A latex balloon will conform to the shape of the trachea, blocking the airway and making it difficult to expel with the Heimlich maneuver.[5]

Airborne particles can lodge in the eyes of people at any age. These foreign bodies often result in allergies which are either temporary or even turn into a chronic allergy. This is especially evident in the case of dust particles.

It is also possible for larger objects to lodge in the eye. The most common cause of intraocular foreign bodies is hammering.[6] 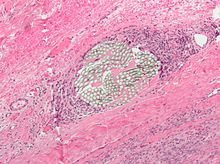 With sufficient force (as in firing of bullets), a foreign body can become lodged into nearly any tissue. Splinters are common foreign bodies in skin. Staphylococcus aureus infection often causes boils to form around them.[7]

Tetanus prophylaxis may be appropriate.[8] 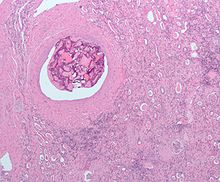 Foreign material in a blood vessel due to an embolization procedure. 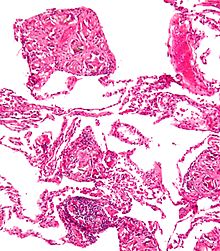 Talcosis of the lung due to intravenous drug use. H&E stain.

Foreign bodies can also become lodged in other locations: 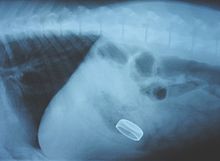 Bottle top swallowed by a dog 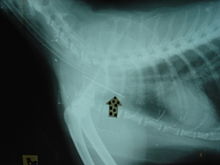 Needle swallowed by a cat

Foreign bodies are common in animals, especially dogs and cats. Dogs will readily eat toys, bones, and any object that either has food on it or retains the odor of food. Unlike humans, dogs are susceptible to gastrointestinal obstruction due to their ability to swallow relatively large objects and pass them through the esophagus. Foreign bodies most commonly become lodged in the stomach because of the inability to pass through the pyloric sphincter, and in the jejunum. Symptoms of gastrointestinal obstruction include vomiting, abdominal pain, and depression due to dehydration. Peritonitis results if either the stomach or intestine has ruptured. Foreign bodies in the stomach can sometimes be removed by endoscopic retrieval or if necessary by gastrotomy. Foreign bodies in the jejunum are removed by enterotomy.

Certain foreign bodies in animals are especially problematic. Bones or objects with sharp edges may cause tearing of the wall of the esophagus, stomach, or small intestine and lead to peritonitis. Pennies swallowed in large numbers may cause zinc poisoning, which in dogs leads to severe gastroenteritis and hemolytic anemia. Linear foreign bodies can especially be dangerous. A linear foreign body is usually a length of string or yarn with a larger object or clump of material at either end. One end is usually lodged in the stomach or proximal small intestine and the other end continues to travel through the intestines. The material becomes tightly stretched and the intestines may "accordion up" on themselves or be lacerated by it.[13] This is especially common in cats who may enjoy playing with a ball of string or yarn. Sometimes the linear foreign body anchors in the mouth by catching under the tongue.[14] Pantyhose is a common linear foreign body in dogs.