Bullet
This article is about firearms projectiles. For other uses, see Bullet (disambiguation). 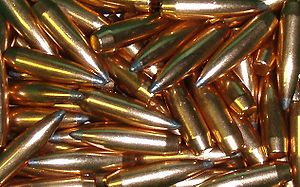 A bullet is a projectile propelled by a firearm, sling, or air gun. Bullets do not normally contain explosives,[1] but damage the intended target by impact and penetration. The word "bullet" is sometimes erroneously used to refer to ammunition generally, or to a cartridge, which is a combination of the bullet, case/shell, powder, and primer.

Lead sling bullets with a winged thunderbolt engraved on one side and the inscription "Take that" on the other side. 4th century BC. From Athens.

Matchlock musket balls, alleged to have been discovered at Naseby battlefield. From the collection of Northampton Museum and Art Gallery.

The history of bullets far predates the history of firearms. Originally, bullets were metallic or stone balls used in a sling as a weapon and for hunting.

Eventually as firearms were developed, these same items were placed in front of an explosive charge of gun powder at the end of a closed tube. As firearms became more technologically advanced, from 1500 to 1800, bullets changed very little. They remained simple round (spherical) lead balls, called rounds, differing only in their diameter.

The development of the hand culverin and matchlock arquebus brought about the use of cast lead balls as projectiles. "Bullet" is derived from the French word boulette which roughly means little ball. The original musket bullet was a spherical lead ball smaller than the bore, wrapped in a loosely-fitted paper patch which served to hold the bullet in the barrel firmly upon the powder. (Bullets that were not firmly upon the powder upon firing risked causing the barrel to explode, with the condition known as a short start.) The loading of muskets was, therefore, easy with the old smooth-bore Brown Bess and similar military muskets. The original muzzle-loading rifle, on the other hand, with a more closely fitting ball to take the rifling grooves, was more difficult to load, particularly when the bore of the barrel was fouled from previous firings. For this reason, early rifles were not generally used for military purposes.

The first half of the nineteenth century saw a distinct change in the shape and function of the bullet. In 1826, Delvigne, a French infantry officer, invented a breech with abrupt shoulders on which a spherical bullet was rammed down until it caught the rifling grooves. Delvigne's method, however, deformed the bullet and was inaccurate.

Square bullets were used in one version of the Puckle gun.

Among the first pointed or "conical" bullets were those designed by Captain John Norton of the British Army in 1823. Norton's bullet had a hollow base which upon firing expanded under pressure to engage with a barrel's rifling. The British Board of Ordnance rejected it because spherical bullets had been in use for the previous 300 years.[citation needed]

Renowned English gunsmith William Greener invented the Greener bullet in 1836. It was very similar to Norton's bullet except that the hollow base of the bullet was fitted with a wooden plug which more reliably forced the base of the bullet to expand and catch the rifling. Tests proved that Greener's bullet was extremely effective but it too was rejected for military use because, being two parts, it was judged as being too complicated to produce. 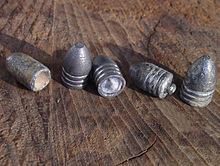 The soft lead Minié ball was first introduced in 1847 by Claude-Étienne Minié, a captain in the French Army. It was nearly identical to the Greener bullet. As designed by Minié, the bullet was conical in shape with a hollow cavity in the rear, which was fitted with a little iron cap instead of a wooden plug. When fired, the iron cap would force itself into the hollow cavity at the rear of the bullet, thereby expanding the sides of the bullet to grip and engage the rifling. In 1855, the British adopted the Minié ball for their Enfield rifles.

The Minié ball first saw widespread use in the American Civil War. Roughly 90% of the battlefield casualties in this war were caused by Minié balls fired from rifles.

Between 1854 and 1857, Sir Joseph Whitworth conducted a long series of rifle experiments, and proved, among other points, the advantages of a smaller bore and, in particular, of an elongated bullet. The Whitworth bullet was made to fit the grooves of the rifle mechanically. The Whitworth rifle was never adopted by the government, although it was used extensively for match purposes and target practice between 1857 and 1866, when it was gradually superseded by Metford's.

About 1862 and later, W. E. Metford carried out an exhaustive series of experiments on bullets and rifling, and invented the important system of light rifling with increasing spiral, and a hardened bullet. The combined result was that in December 1888 the Lee-Metford small-bore (0.303", 7.70 mm) rifle, Mark I, (photo of cartridge on right) was finally adopted for the British army. The Lee-Metford was the predecessor of the Lee-Enfield. 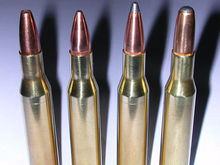 The next important change in the history of the rifle bullet occurred in 1882, when Major Eduard Rubin, director of the Swiss Army Laboratory at Thun, invented the copper jacketed bullet — an elongated bullet with a lead core in a copper jacket. It was also small bore (7.5mm and 8mm) and it is the precursor of the 8mm "Lebel bullet" which was adopted for the smokeless powder ammunition of the Mle 1886 Lebel rifle.

The surface of lead bullets fired at high velocity may melt due to hot gases behind and friction with the bore. Because copper has a higher melting point, and greater specific heat capacity and hardness, copper jacketed bullets allow greater muzzle velocities.

European advances in aerodynamics led to the pointed spitzer bullet. By the beginning of the twentieth century, most world armies had begun to transition to spitzer bullets. These bullets flew for greater distances more accurately and carried more energy with them. Spitzer bullets combined with machine guns greatly increased the lethality of the battlefield.

The latest advancement in bullet shape was the boat tail, a streamlined base for spitzer bullets. The vacuum created as air moves at high speed passes over the end of a bullet slows the projectile. The streamlined boat tail design reduces this form drag by allowing the air to flow along the surface of the tapering end. The resulting aerodynamic advantage is currently seen as the optimum shape for rifle technology. The first combination spitzer and boat-tail bullet, named Balle "D" from its inventor (a lieutenant-colonel Desaleux) , was introduced as standard military ammunition in 1901, for the French Lebel Model 1886 rifle . 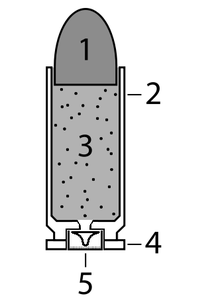 A modern cartridge consists of the following:
1. the bullet, which serves as the projectile;
2. the case, which holds all parts together;
3. the propellant, for example gunpowder or cordite;
4. part of the casing used for loading;
5. the primer, which ignites the propellant.

Bullet designs have to solve two primary problems. They must first form a seal with the gun's bore. If a strong seal is not achieved, gas from the propellant charge leaks past the bullet, reducing efficiency. The bullet must also engage the rifling without damaging the gun's bore. Bullets must have a surface which will form this seal without causing excessive friction. These interactions between bullet and bore are termed internal ballistics. Bullets must be produced to a high standard, as surface imperfections can affect firing accuracy.

The physics affecting the bullet once it leaves the barrel, is termed external ballistics. The primary factors affecting the aerodynamics of a bullet in flight are the bullet's shape and the rotation imparted by the rifling of the gun barrel. Rotational forces stabilize the bullet gyroscopically as well as aerodynamically. Any asymmetry in the bullet is largely canceled as it spins. With smooth-bore firearms, a spherical shape was optimum because no matter how it was oriented, it presented a uniform front. These unstable bullets tumbled erratically and provided only moderate accuracy, however the aerodynamic shape changed little for centuries. Generally, bullet shapes are a compromise between aerodynamics, interior ballistic necessities, and terminal ballistics requirements. Another method of stabilization is for the center of mass of the bullet to be as far forward as is practical, which is how the Minié ball and the shuttlecock are designed. This allows the bullet to fly front-forward by means of aerodynamics.

See Terminal ballistics and/or Stopping power for an overview of how bullet design affects what happens when a bullet impacts with an object. The outcome of the impact is determined by the composition and density of the target material, the angle of incidence, and the velocity and physical characteristics of the bullet itself. Bullets are generally designed to penetrate, deform, and/or break apart. For a given material and bullet, the strike velocity is the primary factor determining which outcome is achieved.

Bullet shapes are many and varied, and an array of them can be found in any reloading manual that sells bullet moulds. Mould manufacturers such as RCBS,[2] Paul Jones Moulds, and David Mos offer many different calibers and designs. With a mould, bullets can be made at home for reloading one's own ammunition, where local laws allow. Hand-casting, however, is only time- and cost-effective for solid lead bullets. Cast and jacketed bullets are also commercially available from numerous manufacturers for hand loading and are much more convenient than casting bullets from bulk lead.

Propulsion of the ball can happen via several methods: 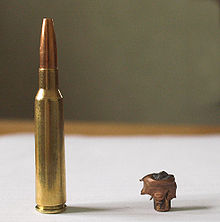 Expanding bullet loaded in a 6.5x55mm before and after expanding. The long base and small expanded diameter show that this is a bullet designed for deep penetration on large game. The bullet in the photo traveled more than halfway through a moose before coming to rest, performing as designed.

Bullets for black powder, or muzzle loading firearms, were classically molded from pure lead. This worked well for low speed bullets, fired at velocities of less than 450 m/s (1475 ft/s). For slightly higher speed bullets fired in modern firearms, a harder alloy of lead and tin or typesetter's lead (used to mold Linotype) works very well. For even higher speed bullet use, jacketed coated lead bullets are used. The common element in all of these, lead, is widely used because it is very dense, thereby providing a high amount of mass—and thus, kinetic energy—for a given volume. Lead is also cheap, easy to obtain, easy to work, and melts at a low temperature, which results in comparatively easy fabrication of bullets.

The St. Petersburg Declaration of 1868 prohibited the use of explosive projectiles weighing less than 400 grams.[4]

Protocol III of the 1983 Convention on Certain Conventional Weapons, an annexe to the Geneva Conventions, prohibits the use of incendiary munitions against civilians.

Nothing in these treaties prohibits tracers or the use of prohibited bullets on military equipment.

These treaties apply even to .22 LR bullets used in pistols, rifles and machine guns. Hence, the High Standard HDM pistol, a .22 LR suppressed pistol, had special bullets developed for it during World War II that were full metal jacketed, in place of the soft-point and hollow-point bullets that are otherwise ubiquitous for .22 LR rounds.

Some jurisdictions are acting on environmental concerns and banning hunting with lead shotgun pellets. This creates issues for shooters because stainless steel pellets are considered to behave sub-optimally in flight compared to lead. The element bismuth is a safe alternative whose atomic mass is closer to lead than steel, and ammunition made from it is becoming ever more widely available.

The word for the bullet, usually because of its speed, is sometimes used figuratively, e.g.: