Endoscopy
For the notion in mathematics introduced by Langlands, see Endoscopic group. 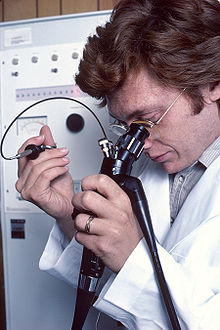 A physician using an endoscope

Endoscopy (pronounced /ɛnˈdɒskəpi/) means looking inside and typically refers to looking inside the body for medical reasons using an endoscope (pronounced /ˈɛndəskoʊp/), an instrument used to examine the interior of a hollow organ or cavity of the body. Unlike most other medical imaging devices, endoscopes are inserted directly into the organ. Endoscopy can also refer to using a borescope in technical situations where direct line of-sight observation is not feasible.

An endoscope can consist of

An anoscope, a proctoscope, and a rectoscope with approximate lengths.

An Endoscopy is a simple procedure which allows a doctor to look inside human bodies using an instrumnt called an endoscope. A cutting tool can be attached to the end of the endoscope, and the apparatus can then be used to perform surgery. This type of surgery is called Key hole surgery, and usually leaves only a tiny scar externally.

The first endoscope, of a kind, was developed in 1806 by Philipp Bozzini in Mainz with his introduction of a "Lichtleiter" (light conductor) "for the examinations of the canals and cavities of the human body". However, the Vienna Medical Society disapproved of such curiosity. An endoscope was first introduced into a human in 1822 by William Beaumont, an army surgeon at Mackinac Island, Michigan[citation needed]. The use of electric light was a major step in the improvement of endoscopy. The first such lights were external. Later, smaller bulbs became available making internal light possible, for instance in a hysteroscope by Charles David in 1908[citation needed]. Hans Christian Jacobaeus has been given credit for early endoscopic explorations of the abdomen and the thorax with laparoscopy (1912) and thoracoscopy (1910)[citation needed]. Laparoscopy was used in the diagnosis of liver and gallbladder disease by Heinz Kalk in the 1930s[citation needed]. Hope reported in 1937 on the use of laparoscopy to diagnose ectopic pregnancy[citation needed]. In 1944, Raoul Palmer placed his patients in the Trendelenburg position after gaseous distention of the abdomen and thus was able to reliably perform gynecologic laparoscopy[citation needed].

Georg Wolf (1873–1938) a Berlin manufacturer of rigid endoscopes, established in 1906, produced the Sussmann flexible gastroscope in 1911(Modlin,Farhadi-Journal of Clinical Gastroenterology, 2000). Karl Storz began producing instruments for ENT specialists in 1945. His intention was to develop instruments which would enable the practitioner to look inside the human body. The technology available at the end of the Second World War was still very modest: The area under examination in the interior of the human body was illuminated with miniature electric lamps; alternatively, attempts were made to reflect light from an external source into the body through the endoscopic tube. Karl Storz pursued a plan: He set out to introduce very bright, but cold light into the body cavities through the instrument, thus providing excellent visibility while at the same time allowing objective documentation by means of image transmission. With more than 400 patients and operative samples to his name, which were to play a major role in showing the way ahead, Karl Storz played a crucial role in the development of endoscopy. It was however, the combination of his engineering skills and vision, coupled with the work of optical designer Harold Hopkins that ultimately would revolutionize the field of medical optics.

The first gastroscope was produced by Georg Wolf in 1911 followed by the first model of a semi flexible gastroscope in 1930 in collaboration with Dr. Rudolf Schindler (Grant et Harley, British Medical Journal, Vol 285,1982). The gastroscope with camera was developed in 1950 by a Japanese team of a doctor and optical engineers. Mutsuo Sugiura, in association with Olympus Corporation, worked with Dr. Tatsuro Uji and his subordinate, Shoji Fukami, to develop what he first called a "gastro camera". It consisted of a tiny camera attached to a flexible tip with a light bulb. With it, they were able to photograph stomach ulcers that were undetectable by X-ray and find stomach cancers in early stage.

In the early 1950s Harold Hopkins designed a “fibroscope” (a bundle of flexible glass fibres able to coherently transmit an image), which proved useful both medically and industrially. The subsequent research and development of these fibres, led to further improvements in image quality. Further innovations included using additional fibres to channel light to the objective end from a powerful external source - thereby achieving the high level of full spectrum illumination that was needed for detailed viewing and colour photography. (The previous practice of a small filament lamp on the tip of the endoscope had left the choice of either viewing in a dim red light or increasing the light output at the risk of burning the inside of the patient.) Alongside the advances to the optical side, came the ability to 'steer' the tip via controls in the endoscopists hands and innovations in remotely operated surgical instruments contained within the body of the endoscope itself. It was the beginning of key-hole surgery as we know it today. Fernando Alves Martins, from Portugal, invents the first fibre optics endoscope (1963/64)

However, there were physical limits to the image quality of a fibroscope. In modern terminology, a bundle of say 50,000 fibers gives effectively only a 50,000 pixel image - in addition to which, the continued flexing in use, breaks fibers and so progressively loses pixels. Eventually so many are lost that the whole bundle must be replaced (at considerable expense). Hopkins realised that any further optical improvement would require a different approach. Previous rigid endoscopes suffered from very low light transmittance and extremely poor image quality. The surgical requirement of passing surgical tools as well as the illumination system actually within the endoscope's tube - which itself is limited in dimensions by the human body - left very little room for the imaging optics. The tiny lenses of a conventional system required supporting rings that would obscure the bulk of the lens' area; they were incredibly hard to manufacture and assemble and optically nearly useless. The elegant solution that Hopkins produced (in the late 1960s) was to fill the air-spaces between the 'little lenses' with rods of glass. These fitted exactly the endoscope's tube - making them self-aligning and requiring of no other support and allowed the little lenses to be dispensed with altogether. The rod-lenses were much easier to handle and utilized the maximum possible diameter available. With the appropriate curvature and coatings to the rod ends and optimal choices of glass-types, all calculated and specified by Hopkins, the image quality was transformed - even with tubes of only 1mm. in diameter. With a high quality 'telescope' of such small diameter, the tools and illumination system could be comfortably housed within an outer tube. Once again, it was Karl Storz who produced the first of these new endoscopes as part of a long and productive partnership between the two men. Whilst there are regions of the body that will forever require flexible endoscopes (principally the gastrointestinal tract), the rigid rod-lens endoscopes have such exceptional performance that they are to this day the instrument of choice and in reality have been the enabling factor in modern key-hole surgery. (Harold Hopkins was recognized and honoured for his advancement of medical-optic by the medical community worldwide. It formed a major part of the citation when he was awarded the Rumford Medal by the Royal Society in 1984.) Application:

Disinfection is essential for all types of endoscopes. The first disinfection device was constructed by S.E.Miederer in 1976 at the University of Bonn in Germany. on:

The main risks are perforation, or a tear, of the stomach or oesophagus lining and bleeding. Although perforation generally requires surgery, certain cases may be treated with antibiotics and intravenous fluids. Bleeding may occur at the site of a biopsy or polyp removal. Typically minor in degree, such bleeding may simply stop on its own or be controlled by cauterisation. Seldom does surgery become necessary.

Fortunately, both perforation and bleeding are extremely rare during gastroscopy.

Other minor risks include drug reactions and complications related to other diseases the patient may have. Consequently, patients should inform their doctor of all allergic tendencies and medical problems.

Occasionally, the site of the sedative injection may become inflamed and tender for a short time. This is usually not serious and warm compresses for a few days are usually helpful.

While any of these complications may possibly occur, it is good to remember that each of them occurs quite infrequently.

A doctor can further discuss risks with the patient with regard to the particular need for gastroscopy.

After the procedure the patient will be observed and monitored by a qualified individual in the endoscopy room or a recovery area until a significant portion of the medication has worn off. Occasionally the patient is left with a mild sore throat, which may respond to saline gargles, or chamomile tea. It may last for weeks or not happen at all. The patient may have a feeling of distention from the insufflated air that was used during the procedure. Both problems are mild and fleeting. When fully recovered, the patient will be instructed when to resume their usual diet (probably within a few hours) and will be allowed to be taken home. Because of the use of sedation, most facilities mandate that the patient is taken home by another person and does not drive or handle machinery for the remainder of the day.

With the application of robotic systems, telesurgery was introduced as the surgeon could be at a site far removed from the patient. The first transatlantic surgery has been called the Lindbergh Operation.

Disposable endoscopy is an emerging category of endoscopic instruments. Recent developments[1] have allowed the manufacture of endoscopes cheap enough to be used on a single patient only. It is meeting a growing demand to lessen the risk of cross contamination and hospital acquired diseases. A European consortium of SME are working on the DUET project to build a disposable endoscope.[2]